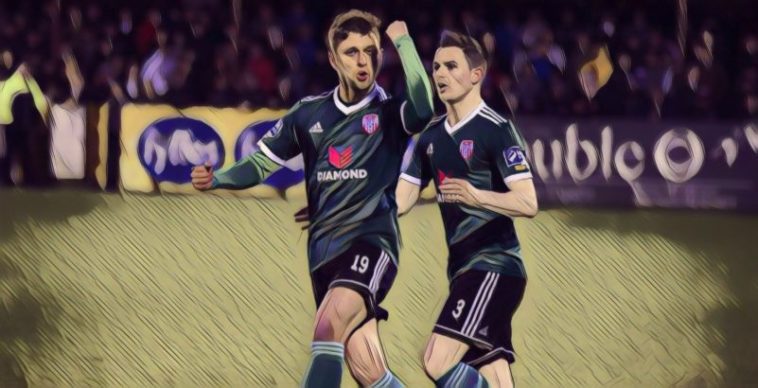 The top three are conspiring to not win the SSE Airtricity Premier Division, Derry City are coming in under the radar, Waterford FC exact revenge on St. Pat’s, Finn Harps get off the mark, and Cork City take a step into the unknown.

Does anybody want to win the league?

All over Europe, in the biggest leagues in football, the best teams are gacking it up wherever you look. Big clubs with something to play for dropping points in winnable games. And the top three teams in the League of Ireland are no exception.

Dundalk snapped their four game winning streak by letting a two goal lead slip against Derry City, Bohemians have taken four points from a possible nine in the past week, while Shamrock Rovers have lost three of their last four games. And yet they still remain league leaders thanks to the form of those around them.

The reigning champions appeared to be in cruise control thanks to Pat Hoban following his brace, but he turned out to be the villain of this tale, giving away a silly penalty to let the Candystripes equalise late on. That could have further repercussions for Dundalk beyond the dropped points, as the club’s top scorer will be suspended for the next match… away to Bohs.

That contest will give both sides a chance to reel in Rovers, who don’t have a game, but given how this title race has gone recently, it’ll probably end in a draw.

While no one is talking about Derry as serious title challengers, they are certainly making a run for best of the rest. The only games the northern outfit have lost have been to the top three sides, something not even those teams can say.

On this occasion they showed enough resilience to stop that mini losing streak to the big boys, clawing back Dundalk to earn a precious point away from home.

There was an element of luck in coming away with a draw; Dundalk were the better side for much of the game, it took a wonder goal from Darren Cole to get them back into the tie, and they were given a soft, yet deserved, penalty in the second half.

But the Candystripes made their own luck to keep this great campaign ticking along. They sit fourth in the table, four points ahead of the pack and looking a good deal more settled than the teams making up the mid-table. They’re already halfway over their points total from last season, showing what a good job Declan Devine has done in reviving their fortunes. European qualification is a live possibility, not just a far off dream.

While this result is a setback for the Lilywhites, it should be put into perspective. Had it not been for a silly foul by Hoban, they would have won this game. As it is, they are still unbeaten in five, the league’s highest scorers and have a game in hand over the leaders who are only three points ahead.

St. Patrick’s Athletic took Waterford FC’s place in the Uefa Europa League owing to a technicality — this current incarnation of the Blues has not been in existence long enough to qualify for European competition. Rules are rules, but that doesn’t mean they have to like it.

So when they travelled to Dublin this past Friday for their first meeting with the Saints since Uefa’s ruling, they were always going to be coming with fists raised.

The sides were evenly matched for the guts of an hour, but Waterford turned the tide the second half as Pat’s struggled to keep up. Ismahil Akinade finished off a wonderful team move to open the scoring. That lead was doubled five minutes later by Zak Elbouzedi, who sneaked past three ball-watching defenders before finishing coolly. In the home side’s desperation to pull one back, they were caught on the break by Aaron Drinan, who made it 3-0.

Pat’s carved out some decent chances over the course of 90 minutes, but they were bullied off the ball several times, which allowed Waterford to break quickly in transition. A disappointing result for manager Harry Kenny, who has seen his charges give some mixed performances up to now.

It only took 16 games, but Finn Harps have won a game of football in the Premier Division! Can you believe it?

It really felt like the Donegal outfit were going to be cut adrift very soon, as they had only managed four draws and 11 defeats up until last week. That four points out of a possible 30. No team with that record is going to stay up.

They gave themselves a fighting chance after beating fellow relegation battlers UCD 3-0, a huge result in the struggle for survival. A brace from the superb Caolan McAleer, and a goal from Nathan Boyle, earned them victory in the kind of fashion that will give their beleaguered supporters hope.

Harps are now, incredibly, unbeaten in their last three fixtures. Conversely, the Students are on a five-game losing run since their 2-1 over Cork City, which came on 15 April. Despite playing some nice football since winning promotion last year, UCD seem to lack the necessary experience and mettle to compete with the stronger sides in this league.

The final scoreline is a reverse from their last meeting six weeks ago, and could be a sign of their changing fortunes.

End of an era in Cork… and the beginning of a new one?

Drawing at home to Finn Harps was the final straw for John Caulfield, who stepped down as manager after five and a half years in charge. During that time Cork never finished outside of the top two, winning the league in impressive fashion in 2017.

Caulfield guided City to six major trophies in total, leading the way during arguably the club’s most successful period ever. The football wasn’t the prettiest though, and when results start to disappear, what is there left? That, and the decreasing crowd numbers in recent months as a result, are why he had to go.

Life after their legendary former manager/player got off to the perfect start however, as the Rebel Army defeated Bohs 1-0 at Dalymount Park.

By all accounts it was a poor match with few clear cut chances, as Cork set out to frustrate their hosts as much as possible. Once the had something to hold onto — Conor McCarthy’s headed finish in the first half — they were determined to get out of there with the full complement of points by hook or by crook.

Whether this is a golden dawn for City or not remains to be seen. Caulfield’s assistant manager John Cotter took his place in the dugout, and he was abetted by club favourites Alan Bennett and Colin Healy. Continuity is the game plan for now, and it should be remembered they still have a strong squad, even if they have had to sell off some of their better players since last season.

Cork are in something of a false position right now. The rest of the season will be focused on getting as far away from it as possible.