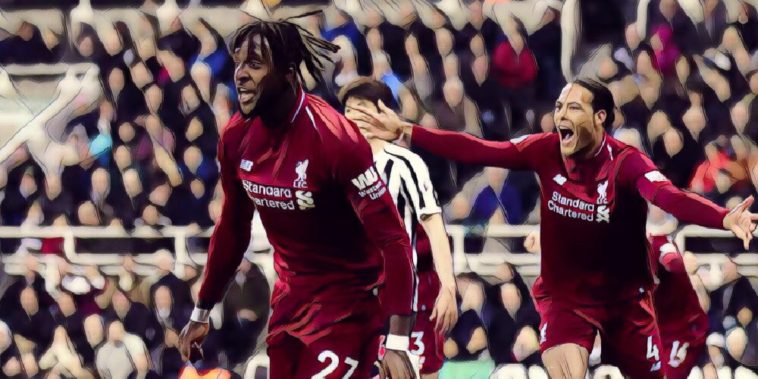 This man only deals in the dramatic! Divock Origi was the hero once again for Liverpool this season, with another late headed goal to give his side a crucial three points, taking the title race in to squeaky bum territory on the last day.

Just about getting his head to a lovely Xherdan Shaqiri floated cross, the Belgian sent the travelling Liverpool fans into raptures. Huge, huge goal from the super sub!

One of Spur’s main men this season; Son had an afternoon to forget on the South Coast. Whether he is feeling the strain or was just a bit miffed with a bit of snide play from Jefferson Lerma (he wouldn’t be the first!), either way, the South Korean went for the Bournemouth full midfielder, flooring him in plain view of the referee and ensuring a good old fashioned bout of Premier League handbags.

Sometimes things are fated to fall a certain way in the beautiful game and so it must have been, that Spurs fans had a collective shudder as news broke that Bournemouth were throwing in a rookie goalkeeper for his senior debut. Mark Travers duly became the scourge of Spurs on Saturday afternoon, as the debutante made a string of fine saves to keep out the away side.

His stop to keep out Dele Alli’s first-half drive from distance was particularly impressive and the 19-year old Irish youth player must have felt ten feet tall as walked off the pitch with a clean sheet and a lovely embrace from Hugo Lloris to boot. Nice.

This Bournemouth v Spurs tie is certainly hogging the limelight in the penultimate edition of our illustrious weekly feature! But we couldn’t let this week get past us without a mention of Juan Foyth’s Gerrardesque cameo on Saturday. The Argentinian youngster, in fairness, lasted about 31.5 seconds longer than Steven Gerrard did in his infamous final appearance against Manchester United.

However, the Spurs defender earns extra brain fart points for leaving his already beleaguered teammates with just nine men on the field after his brainless, dangerous lunge. And, to make matters worse, he had come one to stop Toby Alderweireld from picking up a second yellow card. Oh, the irony of it all.

The big Austrian was the hero of this quintessential dead rubber contest on Saturday afternoon. Scoring his first goals since January, the former Stoke man was back to his best in the nick of time, with just one game left this season.

In fairness, despite his blip in form and open flirtation with the mighty Chinese Super League, Arnautovic has now been involved in 30 league goals for West Ham since the start of last season. When he can be bothered he’s pretty good, as Southampton’s battered defenders will tell you.

With Spurs losing their umpteenth game of the season and dropping to fourth, you’d have thought Arsenal would have been licking their lips as the prospect of Brighton at home. A good win here, and they’d narrow the gap between their bitter rivals to just a single point.

Obviously, nobody bothered to tell any of this to Mr. Xhaka who was in his most erratic of form on Sunday. The penalty he gave away on Solly March was so unnecessary, you could almost smell the frustration at The Emirates as the referee ominously pointed to the spot. A 1-1 draw all but knackered Arsenal’s top four hopes for another season. Let’s hope Xhaka enjoys a lovely Thursday – Sunday fixture combo!