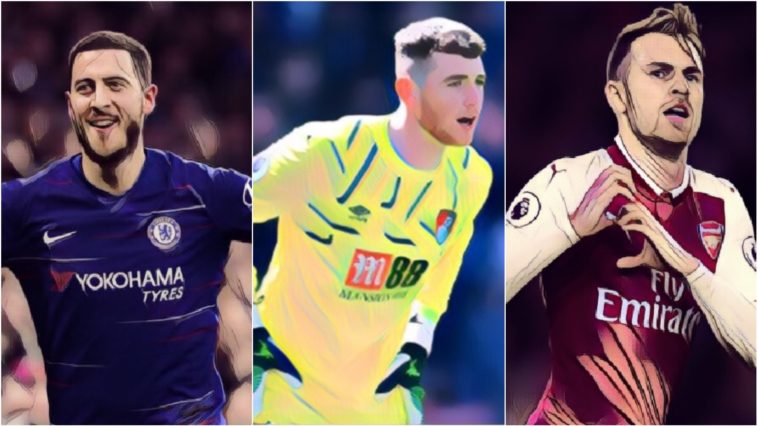 It’s the penultimate week of the Premier League, meaning there are only three games left in this tense title race between Man City and Liverpool. Elsewhere, the relegation battle came a halt when Cardiff City lost to Crystal Palace, condemning them to an quick return to the Championship.

The top four has been virtually settled, as it would take a minor miracle for Arsenal to overcome the goal difference between them and fourth-placed Tottenham Hotspur. Manchester United are back in the Europa League, but that might be the least of their problems.

After 11 years at Arsenal, Aaron Ramsey bid a fond farewell to the fans following a 1-1 draw with Brighton & Hove Albion. The Welsh midfielder isn’t getting the goodbye he would have wanted, having sat the last few games out with an injury, but it was an emotional moment on the Emirates pitch, where the club held a send-off presentation for himself, Danny Welbeck and Petr Cech.

The Welshman scored the winning goal in two FA Cup Finals, and one of the greatest half-volleys of all time against Galatasaray. pic.twitter.com/k2yPjDqc8d

It was also a less than ideal farewell for Welbeck, who has struggled with injury yet again this season, and Cech, who was dropped earlier in the season for Bernd Leno. Only the goalkeeper is capable of having a swansong before retirement, as the Gunners face Burnley in what is now a meaningless fixture after Champions League qualification became virtually impossible following Sunday’s draw.

Petr Cech consoles Aaron Ramsey who had to sit through Arsenal's 1-1 draw with Brighton today pic.twitter.com/brX26GkdlX

The north London club will miss Ramsey, who is joining Juventus in the summer, perhaps more than any of the star players who have left over the years. Unai Emery’s side clearly lack an attacking thrust from midfield when he’s not there, as evidenced by the past three weeks. Arsenal haven’t won a league game since he picked up the hamstring injury against Napoli in the Europa League quarter-finals, causing them to lose out on a top four finish.

While the rumours keep swirling around, Eden Hazard is still out here doing bits. The Belgian was a constant threat against Watford, charging into the box with the ball at speed again and again as the defenders retreated in fear of his dazzling feet.

The Chelsea attacker provided the assists for the Blues first two goals, for Ruben Loftus-Cheek and David Luiz, in a 3-0 over the Hornets. He also had six attempted assists and three shots.

In the second-half Hazard also performed a drag back that was very reminiscent of Ferenc Puskas sending Billy Wright for a sandwich during Hungary’s 6-3 win over England at Wembley.

Ryan Fraser was also excellent in Bournemouth’s 1-0 win over Spurs, making a frankly ridiculous nine attempted assists in the game.

Eden Hazard has been directly involved in 31 #PL goals for Chelsea this season (16 goals, 15 assists)

Only Jimmy Floyd Hasselbaink, Frank Lampard and Didier Drogba have had a hand in more in a single campaign for the Blues pic.twitter.com/Awu5m7X0SW

It took almost an entire season to show his best form for West Ham United, but Ryan Fredericks did so in style this weekend during their 3-0 win over Southampton.

Towards the end of the match the full-back received the ball on the right side of midfield, about ten yards from the halfway line, before running at defence with the ball, completing a quick one-two with Jack Wilshere, before finding a bit of space to shoot in the far corner of the net.

There was a smidgen of luck with the bounce of the ball in the box, but a combination of work rate and skill put him in that position in the first place.

It’s not easy to pick out one save in particular that Mark Travers made at the weekend, but the way he stood up in a one-on-one against Lucas Moura deserves praise. It was Spurs’ best chance of the game, but the Irishman was not going to be beaten on Saturday.

Aged 19 years and 351 days, the Maynooth native became the youngest goalkeeper to start in the Premier League since Joe Hart for Man City all the way back in 2006.

The former Shamrock Rovers goalie didn’t even have a Wikipedia page before the game, yet he came away with the man of the Match award after making five saves on Saturday. All five saves came in the first half, as Spurs failed to create anything following two red cards.

Travers also scored a goal from his own half last season for Weymouth.

The spoils are shared between Arsenal and Manchester United this week for winning the race for the Europa League spots. None of the teams chasing third and fourth in the table have exactly covered themselves in glory this past month, collectively picking up 11 points out of a possible 45.

But the fact that the Gunners and the Red Devils somehow conspired to lose out when they had a game in hand over Chelsea while Spurs continually dropped points playing a day earlier every week, meaning they knew the lay of the land and what they had to do.

Last month Raul Jimenez celebrated scoring a goal by revealing a Mexican wrestling mask covered in the Wolves logo. This week he met up with WWE star Sin Cara, who wears a mask in the design of the one Jimenez revealed during their FA Cup semi-final defeat to Man City.