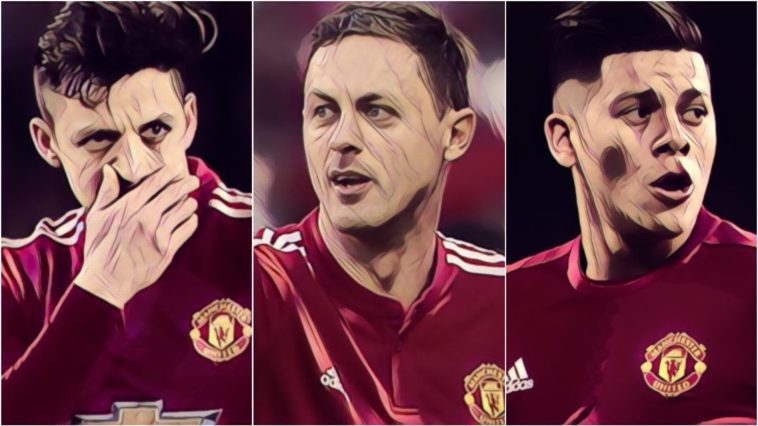 Man United need to sell at least five players from their bloated and aging squad in order to become Premier League and Champions League contenders once again.

Everton’s 4-0 thrashing of Manchester United at Goodison Park painted the away side’s blight in such a stark light that it was almost unbearable to look at, yet impossible to ignore. The Red Devils have now lost all but one of their last five games, conceding 11 goals while crashing out of Europe at the hands of Barcelona and slipping down a peg in the race for a top-four spot in the Premier League.

Five years on from David Moyes’ sacking, following a similarly resounding defeat in the same fixture, United have barely progressed at all. The club are yet to hire a technical director, although The Telegraph have reported that assistant coach Mike Phelan could be in line to get it.

Whoever does end up in the new role, they will have a hell of a job on their hands. A massive clearout is required, with high-quality replacements to replace a high priority. But such wholesale change will not be possible overnight, meaning the new director will have to pick their battles and decide which players they can’t afford to lose and the ones that just have to go.

Five Manchester United players that need to be sold this summer:

Around 18 months ago, Alexis Sanchez would have been considered one of the best talents in the Premier League. Just over a year into his stint at Man United, the Chilean is one of the bemoaned players in the country, so steep has been his decline.

Even executive vice-chairman Ed Woodward, who sanctioned his transfer from Arsenal, has reportedly admitted signing the attacker has been a failure. No duh. This season the former Barcelona forward has provided just one goal and three assists, and has missed 11 matches through injury. He also hates a cold draft apparently. Not exactly the return the club were hoping for when they agreed to pay him £26m per year in salary.

That presents the biggest obstacle when it comes to offloading him, however. Only PSG at their most clueless would pay the required amount, as it’s highly doubtful even a club in China would shell out for him given the newer, more restrictive rules surrounding transfers in the Chinese Super League. With over three years left on his contract, Sanchez will cost United a pretty penny one way or the other.

When this writer travelled to Old Trafford to watch the Champions League quarter-final between Man United and Barcelona, one player in particular stuck out like a sore thumb for his extreme badness, and he has a unisex forename.

Ashley Young’s performance against the Spanish champions was turgid, losing the ball 32 times and completing zero successful crosses from 11 attempts, but it was hardly surprising. The converted full-back was past his prime several years ago, but has somehow managed to remain a regular starter in this squad thanks mainly to the club’s lack of proper planning.

The 33-year-old could never be faulted for his work ethic, but his time at Old Trafford should — finally — come to an end this summer.

Remember when Nemanja Matic used to be a commanding presence in midfield? Whatever happened to that guy, I haven’t seen him in ages.

ManUtd.com describes the holding midfielder as someone who plays with “minimum fuss but maximum efficiency”, but the opposite is closer to the truth these days. The Serb is only 30-years-old but already looks way past his peak. That £40m they paid Chelsea for him just under two years ago could be the worst value-for-money signing the club has ever made were it not for Sanchez.

See Also: Ten of the most memorable games between Man United and Spanish clubs

The Argentine defender has managed to be at Man United for five years despite never really impressing in that period of time. He joined the club after impressing at the World Cup in 2014, which says a lot about their recruitment process in the post-Fergie era.

Rojo is only 29 years of age and has a contract until 2021, but with Chris Smalling and Phil Jones being handed new deals recently, is there any place for him in the team? Five games for the first team this campaign would suggest there is not.

The case of Matteo Darmian is a strange one. He arrived from Torino in 2015 for, by United’s standards, a relatively small fee having impressed in Serie A. He’s an Italy international with 36 caps and, although his preference is right-back, he can play any position across the back four.

So why hasn’t it worked out for Darmian at Old Trafford? He hasn’t been overly impressive, yet he hasn’t been as atrocious as some of his colleagues in the backline. Evidently out of favour, he has only played six games all season and finds himself out of the matchday squad altogether more often than not.

The Italian’s contract runs out this summer, although the club has an option to extend it for a year. The question is, will they?

Read: The frustrating pointlessness of the Young Player of the Year Award