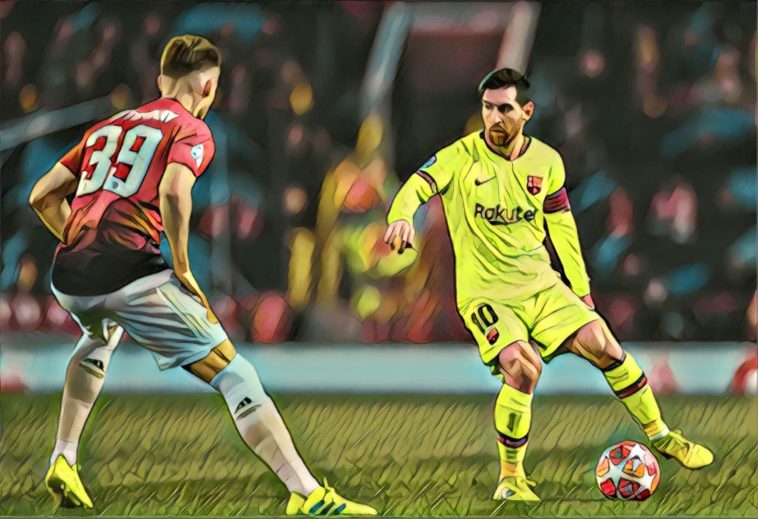 As I write this the day after the night before, I am still a sleep deprived mess. Bleary eyed from a full day of travelling from Dublin to Salford via bus and ferry, I have only just arrived back home from seeing Manchester United lose narrowly to FC Barcelona.

Despite the fact that I hold the view that local and not global football is the heartbeat of the game, there is still nothing quite like getting up for the big match, making the hike for the occasion at the expense of my wallet and sleep pattern in equal measure. You could count the hours of shuteye I was able to catch on one hand.

As I left Old Trafford last night in a state of advanced refreshment, I felt satisfied with my night’s entertainment as a neutral observer. This was far from a classic encounter, but I arrived, heard the Champions League anthem, watched two heavyweight clubs duke it out for 90 minutes, then went home.

The opening exchanges were extremely ominous for the seemingly overawed Man United, who couldn’t get to grips with the pace at which Barcelona were playing. It was incredible to see them in full flow in those early moments.

It took just 12 minutes to manifest itself in an end product, as Lionel Messi — perhaps the main reason my brothers and I were there on Wednesday evening — played the defence like a fiddle, flicking the ball over everyone to Luis Suarez who headed it into the direction of Luke Shaw for the opening goal.

That gave me my first experience of VAR in person, which provided a novelty factor to proceedings, although the goal itself was an anti-climax as a result. The most entertaining element of it all was the silence that befell the United crowd following their premature delight at the goal being ruled offside.

It looked as if things could get ugly for United, and in general too. An errant hand from Chris Smalling bloodied Messi, while Shaw and Sergio Busquets earned yellow cards, all before the 20th minute. Unbeknownst to us, the intensity of the fixture had already peaked by then.

Following the goal, United mounted — from my view in the corner of the Sir Alex Ferguson Stand at least — a relatively impressive fightback, pushing up on Barcelona’s goal kicks to get Andre ter Stegen to punt long, forcing the visitors into mistakes in midfield, and getting more of the ball.

The second-half was an object lesson from the Catalans in game management. They rarely bothered the United goal, but that was as much by design as it was through the Red Devil’s defensive solidity. The away goals rule ensures they effectively take a two goal lead back to the Nou Camp, so they chose to preserve their energy rather than chase more goals and risk opening the game up.

Barcelona, who had 66% possession, controlled the pace of the game without ever really dominating, nullifying United’s counter-attack in the process. But this performance didn’t exactly scream European champions to me.

Afterwards, I was unsurprised to find disgruntled fans. I got chatting to two supporters who were also over from Ireland, Longford of all places. One of them, a man in his 60’s, puffed on a cigarette as he admonished Luis Suarez for being a “c*nt”.

There was latent respect in his statement though, weird as that might sound, as the Uruguayan, now a shadow of the player who terrorised this crowd when he played for Liverpool, was willing to do whatever it took to help his team win. An elbow here, a dive there, and being in the right position to offer an assist; it’s all part of the job description. But the same could not be said of his opposite number, Romelu Lukaku, which may have been a subtle, if not a more worrisome underlying concern than Suarez’s shithousery.

Paul Pogba’s performance was another common complaint in the aftermath, with supporters disappointed he didn’t offer a cutting edge to United’s blunt attack. The Frenchman was underwhelming (l’Equipe gave him a 3/10), yet he wasn’t alone in that regard. Marcus Rashford was just about as rudderless as his Belgian colleague up front, while Ashley Young squandered a glorious opportunity to create something in the first-half.

Pogba wrestled the ball in midfield from Gerard Pique, but the right-back was his only companion on the counter. Young subsequently had a brain fart when he received the ball from the midfielder, hitting the ball in the direction of the corner flag rather than a fellow attacker. In any case, he missed both.

It’s hard to believe this same player was playing at a World Cup last summer, so terrible was he on this night. Young crossed the ball 11 times against Barcelona without a single one reaching their intended target, while he also lost possession on 32 occasions. Incredulously United persisted with playing the ball down the right-hand side, despite how easily the opposition were dealing with it.

It’s easy to take potshots at Young and his regression as a player, but the persistence with a one-dimensional attack betrayed a lack of tactical ingenuity on the part of Ole Gunnar Solskjaer. Even when Anthony Martial and Jesse Lingard came on in place of Lukaku and Diogo Dalot, the approach didn’t seem to change all that much. It was hardly an encouraging sign for someone who just signed a permanent deal, yet has only won a third of his matches since signing on the dotted line.

The irony is that the Norwegian has done so well since arriving in December that he’s moved the goalposts. This season was supposed to be a dead campaign with nothing to lose, but now there’s a top four spot and a place in the Champions League semi-finals at stake, and judging by the atmosphere around us last night, the fans aren’t willing to give the manager the same amount of rope as before. Solskjaer is being judged on a curve and that’s just how it is.

One bright spot from the game, however, was Scott McTominay. Used as a defensive midfielder and even as a centre-back by Jose Mourinho, McTominaldo has thrived further up the pitch under Solskjaer. Against Wolves last week he was impressive in an advanced role, scoring a goal, while on Wednesday he was the engine room in the centre of the park for his side. He disrupted Barça’s rhythm on several occasions, was dominant in the air, and gave United a platform from which to build.

Now that I have seen one of these famous European nights up close, it saddens me to think this kind of occasion will become increasingly uncommon for the less fashionable clubs around Europe. The only other Champions League game I’ve attended was a fourth-round qualifier between Dundalk and Legia Warsaw, but recent rule changes mean teams such as those will have even less chance of reaching the group stages. A tournament once created for the league champions of each country has gradually morphed into a circle jerk of the elite.

See Also: Ten of the most memorable games between Man United and Spanish clubs