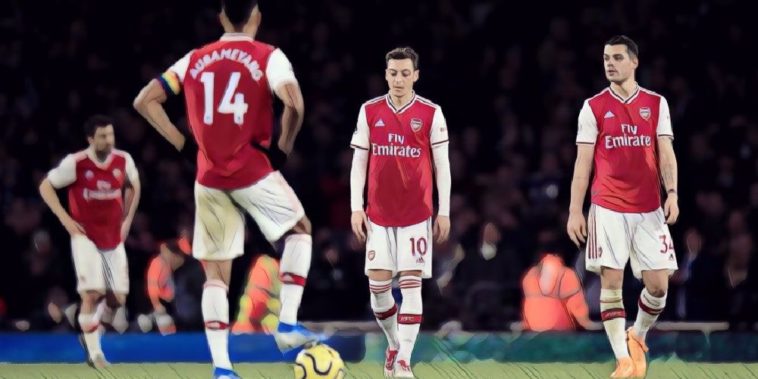 Mikel Arteta has made his first move into first-team management, and it will prove quite some job for the Spaniard at the Emirates.

The ex-Arsenal midfielder has been appointed as the new head coach of his former side, his task to stop the club’s worrying decline in recent seasons, and he will need to call on all of the knowledge gained from three seasons on the coaching staff at Manchester City to turn the Gunners’ fortunes around.

Albert Einstein is widely credited with saying ‘the definition of insanity is doing the same thing over and over again, but expecting different results’.

Now we’re not calling the Arsenal board insane, but their constant stop-gap fixes to their leaky defence have been going on for almost a decade, failing to significantly strengthen this area of their side that even the least observant of football fans can see is a glaring weakness.

For too long the Gunners have possessed a rearguard that lacks any signs of leadership, solidity or organisation, with their cut-price defensive purchases including both youthful and experienced options proving inadequate.

Aside from the regrettable purchase of the error-prone Shkodran Mustafi, however, the club’s priciest investments have rarely focused on their defence. Never has this proved more the case than this summer, the club overlooking their defensive options in favour of splashing a £72m fee on winger Nicolas Pepe, despite attack being the club’s greatest strength.

Switches in formations have failed to eradicate the club’s woes, and Arteta’s chief priority in the transfer market must be to end their defensive flakiness, signing a proven top end performer to marshal a defence which has proven an Achilles heel for far too long.

Toxic atmosphere amongst the Arsenal support

The Emirates stadium has not been a pleasant place to visit in recent months, the club’s struggles contributing to a toxic atmosphere generated at the ground and Arteta must find some way to lift the gloom.

Granit Xhaka’s angry confrontation with the club’s fans after being jeered earlier in the campaign was a major incident, the Swiss midfielder stripped of the captaincy and initially exiled by the now departed Unai Emery.

The media organisation’s owner, Robbie Lyle, was confronted by angry fans following the Gunners’ draw with Everton last week, being surround by chants of ‘get our of our club’.

Arteta must attempt to end the unrest and lift the atmosphere surrounding Arsenal, with results on the pitch key to his hopes.

Ask any Arsenal fan, and they’ll likely tell you that the club’s leading talents are Pierre-Emerick Aubameyang and Alexandre Lacazette.

Both players are amongst the finest in the division, the problem is that they play in the same position.

The forward duo possess a great relationship off the pitch, though it can be difficult to fit them both into the same system and maintain balance. Aubameyang is likely to provide more goals, though the industry Lacazette brings is sorely lacking in his absence.

Should Arteta field a 4-3-3 system similar to the one implemented at Manchester City, captain Aubameyang is likely to find himself in an unfavored wide position, and his lack of work-rate defensively then becomes a concern.

Finding a solution should be high amongst Arteta’s priorities, as he bids to get the most out of the club’s existing talent.

What to do with Mesut Ozil?

Another of the club’s best talents, Ozil has struggled to find any form or consistency in recent times and his failure to adapt has seen the German become an increasingly peripheral figure at the club.

The former Real Madrid star possesses the technical brilliance and vision to unlock stubborn defences, but his lack of contribution off the ball and tendency to drift out of games remains a major problem.

Ozil has been strongly linked with an exit but his club-record wages remain a huge stumbling block in finding a potential suitor, his current deal not expiring until the summer of 2021.

Interim manager Freddie Ljungberg was also left angered by Ozil’s response to being substituted earlier this month, though Arteta says each of his players will be given a fresh slate, and praised the playmaker’s attitude after yesterday’s draw with Bournemouth.

Whether Arteta is able to get the best out of Ozil on a consistent basis though, very much remains to be seen.

Arsenal’s title-winning teams seem an awfully long time ago for the club’s supporters, when the north London side was able to boast leaders and winners in the form of Tony Adams, Patrick Vieira and Sol Campbell.

For over a decade now the club have lacked any form of spine or bite, Watford’s Troy Deeney infamously referring to Arsenal’s ‘lack of cojones’ after a defeat at Vicarage Road two years ago.

Already this season the Gunners have changed captains and squandered two-goal leads against the likes of Watford and Crystal Palace, whilst capitulating completely in contests against the leading sides in the division, suffering chastening defeats to Liverpool, Leicester and Manchester City.

The club have long lacked characters and a winning mentality, though that may prove difficult to instil without the additions of both ‘winners’ and ‘leaders’ in the transfer market.