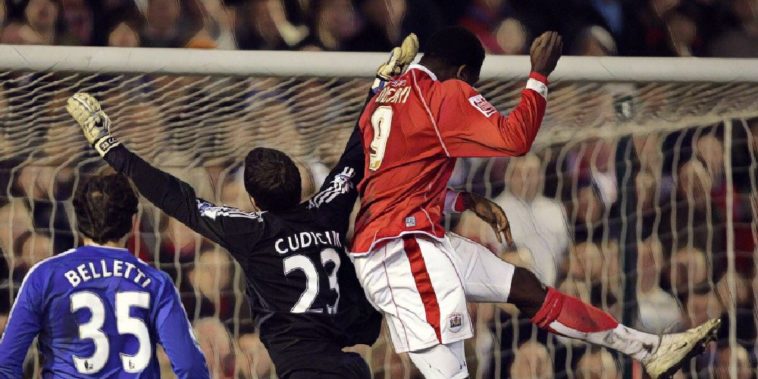 This weekend brings the FA Cup’s quarter-final stage with each of the remaining eight sides now dreaming of a place in the Wembley final.

Just two more wins are all it will take to secure a place in the showpiece, the FA Cup final remaining one of the most eagerly anticipated days on the football calendar.

Each of the remaining sides will now have hopes of lifting the famous old trophy and ahead of this weekend’s fixtures we’ve decided to revisit some classic cup clashes from the quarter-final stage.

Here are five of the best FA Cup quarter-finals.

Manchester United enjoyed a strong run of FA Cup success in the mid-sixties, winning the trophy for the first time since the Munich Air Disaster in 1963 before reaching the semi-finals the following season.

Matt Busby’s side were bidding to reach the last four for the third consecutive campaign when they were drawn to face Wolves in the last eight in 1964/65, a fixture which would see the two sides share eight goals in a thriller at Molineux.

Wolves raced into a two-goal lead inside the opening quarter of an hour through Hughie McIlmoyle’s double, though Denis Law hit back three minutes before the interval to half the deficit.

United took charge of the contest in the second period and David Herd equalised six minutes after the break, before George Best’s goal put the Red Devils ahead for the first time.

That fixture ultimately ended in defeat as the club’s hopes of a historic domestic double were ended, though United did secure the league title to be crowned as champions for the first time in eight seasons.

Arsenal were competing to become the first side in history to win English football’s domestic treble in 1986/87, the north London side in title contention and through to the League Cup final as they hosted Watford in the FA Cup’s last eight.

The Gunners took an early lead as Ian Allinson capitalised on a calamitous defensive mix-up in the Watford defence to open the scoring, though the pendulum soon swung towards the visitors as wingers David Bardsley and John Barnes starred.

Bardsley’s cross was met by Luther Blissett to bring the scores level before another fine delivery from the winger was headed home by Barnes to put the Hornets ahead.

Controversy then surrounded the third goal as referee, Brian Stevens, ignored the flag of his assistant for an incident in the Watford penalty area, the visitors clearing their lines as Arsenal stood still awaiting a decision.

Blissett picked up the clearance before racing into enemy territory to fire home at the second attempt, ending Arsenal’s dreams of a famous treble and securing Watford’s place in the final four.

A classic cup upset at the quarter-final stage and one of the most remarkable FA Cup tales, Wycombe Wanderers became only the eighth team outside of the top two divisions to reach the semi-finals.

The third-tier outfit travelled to face Premier League side Leicester and produced a stunning upset, booking their place in the last four courtesy of a last-minute header from Roy Essandoh.

Essandoh’s story is an extraordinary one having only arrived at the club a matter of days earlier, the forward having responded to an advert on BBC Ceefax, Wycombe offering trials for forwards given their lack of attacking options.

His career until then had been a journeyman existence including spells in Scotland and Finland, before being handed a rolling contract with the Chairboys and writing himself into FA Cup folklore.

The game was finely poised at 1-1 after Muzzy Izzet had cancelled out Paul McCarthy’s shock opener for Wycombe, only for Essandoh to come off the bench and rapidly rise from obscurity to become a household name.

Manager Lawrie Sanchez – who famously scored the final winner as Wimbledon upset Liverpool in 1988 – was forced to watch the action unfold on a tv monitor after being sent off for protesting a decision, the travelling support erupting as Essandoh made his mark.

The forward headed home a stoppage-time winner in a seismic shock at Filbert Street, Wycombe advancing to the semi-finals where they were beaten 2-1 by eventual winners Liverpool.

London rivals Chelsea and Tottenham have played out some classic cup clashes, including this thrilling meeting between the two sides in the 2006/07 quarter-finals.

Chelsea were in pursuit of all four major trophies having enjoyed huge success since the arrival of Jose Mourinho, though were in danger of exiting the FA Cup after twice falling behind to Spurs at Stamford Bridge.

Spurs responded in fine style and regained the lead through Michael Essien’s own goal, and Hossam Ghaly made it 3-1 at half-time after bursting through to double the advantage.

Jose Mourinho had said pre-match that he did not want a replay, though the Chelsea boss was grateful for the draw as goals from Lampard and Salomon Kalou ensured the two teams would meet again.

Chelsea won 2-1 at White Hart Lane in the replay to advance to the last four, the west London side eventually beating Manchester United in the first-ever final at the new Wembley, securing a domestic cup double.

Another shock scoreline, Barnsley enjoyed quite the FA Cup run during the 2007/08 campaign, in a season which the underdogs reigned supreme in world football’s oldest national competition.

Simon Davey’s side finished the season a distant 18th in the Championship, saving their best performances for the FA Cup after eliminating Premier League giants in the shape of Liverpool and Chelsea.

Barnsley stunned Liverpool at Anfield in the fifth round before producing another shock in the last eight, Kayode Odejayi’s second-half header eliminating holders Chelsea and securing the Yorkshire side’s place in the semi-finals for the first time since winning the trophy in 1912.

The result was incredibly Chelsea’s only defeat in the FA Cup for four seasons after winning the competition in 2007, 2009 and 2010, though Barnsley’s brilliant run was ended by Championship rivals Cardiff in an unlikely last four meeting.