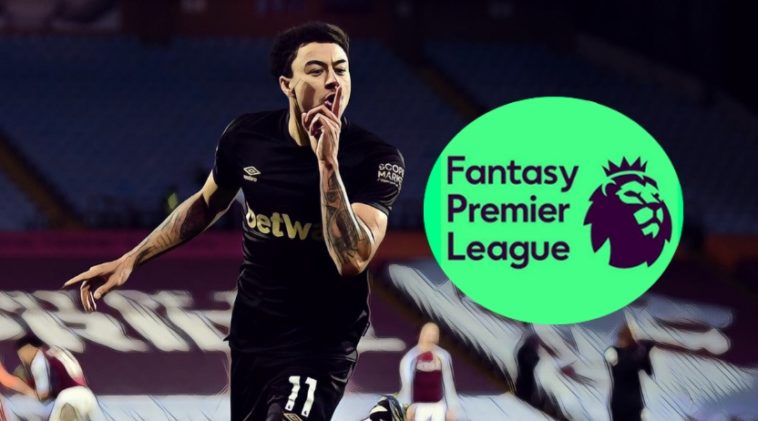 With just four fixtures in gameweek 29 of Fantasy Premier League, it’s imperative to nail your transfers and captaincy this week.

We’re anticipating them all to be low-scoring matches, so it’s important to be selective if, unlike me, you’re not using your Free Hit chip. Don’t take unnecessary hits to fill your team, and make sure to double check a player’s availability before confirming a transfer.

On this week’s episode of The Fantasy Faithful podcast, Harry and I run through some of our favourite picks for GW29 and our reasons for them, as well as our captaincy picks.

Don’t forget this week’s deadline on Friday again. You don’t want to miss it like yours truly did in GW28…

Unlike the seven-goal thriller we were treated to when these two met early on in the season, this meeting between Fulham and Leeds United does not feel like a goal bonanza waiting to happen. For one, the host’s defence has improved markedly, while Leeds can’t see to find the net of late.

Marcelo Bielsa’s side have scored three goals in their last five matches, all of which came against a desperately out-of-form Southampton. Only three teams have scored fewer over that period, including Fulham (2), despite the fact the Yorkshire outfit have had the second-most shots (46).

This presents a big conundrum to FPL managers, particularly as Patrick Bamford (£6.7) is owned by almost half of us. The English striker also went off injured in the first-half against Chelsea, which is a concern. Bielsa says he should be able to play, but that his hip is “painful”.

I don’t find Leeds assets particularly attractive for this week, yet I can’t help but want to start Raphinha (£5.6). The Brazilian, who has been one of the best signings of the season, has created more chances than any other player over the past five gameweeks.

We flagged up Stuart Dallas (£5.1) as one of the best bargain options at the beginning of the season and he hasn’t let us down. The Northern Irishman has five goals, three assists and nine clean sheets so far this season to give him the fifth-most FPL points among defenders. The fact he actually plays in midfield makes him a lot more attractive, while Fulham’s profligacy in front of goal doesn’t hurt.

But it’s Fulham’s defenders that feel like the right bet in GW29. Before the Man City game they had conceded just twice in their previous seven outings. In the past five gameweeks they have had the third-highest expected clean sheets (2.76 xCS) behind Chelsea and City.

The great thing about Fulham’s defenders is that they are all dirt cheap. Joachim Andersen and Tosin Adarabioyo (both £4.5) are nailed-on starters in the centre of defence, while utility man Ola Aina (£4.6) has become almost undroppable. The Nigerian is more likely to get attacking returns, too. Alphonse Areola (£4.6) has also been a monster in goal this season.

Leeds’ leaky defence could also make their attackers a viable option this week. Since joining on deadline day, no Fulham player has more goals (2), shots in the box (11), big chances (5) or expected goals (3.39 xG) than Josh Maja (£5.5). Meanwhile, Ademola Lookman (£5.1) is their only player with more total shots (17) in that time, while also creating 17 chances.

Both are great differential options to punt on if you are using your Free Hit chip.

FPL Podcast: The best players to transfer in for blank gameweek 29

This one has 0-0 written all over it, although Brighton should by all rights have too much for Newcastle United, whose assets I’m completely ignoring for GW29.

I will be targeting The Seagulls defence on my Free Hit, bringing in goalkeeper Roberto Sanchez (£4.5) and Lewis Dunk (£5.0), while I might also play Joël Veltman (£4.3). Dunk has the potential to score from set pieces, and the Magpies have conceded more headed goals than any other team over the past six matches.

However, Callum Wilson recently returned to training and a potential reappearance for him in the starting lineup makes Brighton’s defence a bit more of a risk.

An intriguing matchup that could see a lot of assets cancel each other out, I’m heavily leaning towards West Ham United for this one.

Since the beginning of 2021, the Hammers have the fifth-most expected goals (19.71 xG) and the third fewest expected goals conceded (12.16 xGA). David Moyes could credibly argue that his team have been the best non-Big Six team since the New Year.

Jesse Lingard (£6.1) is probably the best pick, given his excellent form since joining on loan from Manchester United, which has earned him an England recall. West Ham create fewer chances when he’s not in the team, while he also leads his teammates for goals (4), shots in the box (11) and touches in the penalty area (24) since making his debut. And that’s despite missing the game against his parent club.

Michail Antonio (£6.6) has blanked in his last two matches, but is still a fine option for GW29. He has two goals and two assists in his last six appearances, as well as the most expected goals (2.41 xG) of any West Ham player in that time.

I would take West Ham’s defence over Arsenal’s pretty much any day, although I wouldn’t be counting on a clean sheet here. Still, Aaron Cresswell (£5.9) is as likely as anyone to get attacking returns in this game. The full-back leads the league among defenders for assists (7) and ranks fourth for chances created (41).

I’m tempted by Arsenal, but in two minds about whether to commit to bringing in their assets or not. Bukayo Saka (£5.3), Pierre-Emerick Aubameyang (£11.5), Nicolas Pepe (£7.6) and Martin Ødegaard (£5.9) are all worth consideration, but which of them starts is another question.

If Saka is fit then he is definitely in, but if not then Martin Ødegaard (£5.9) would be my preference to slot in. Aubameyang could be a great captaincy differential, but he played the full 90 minutes in the Europa League on Thursday. That leads me to believe Alexandre Lacazette (£8.1) will start on Sunday.

If Moyes takes the same conservative approach to this match as he did to the Man United – and I think there’s a decent chance that he does – then that makes Tierney all the more attractive for clean sheet potential.

Given recent form, Tottenham Hotspur should be the favourites going into this one. Aston Villa’s defence has steadily declined in recent weeks, while Spurs’ attacking output has increased since Gareth Bale (£9.6) has been properly integrated into the frontline.

There are two factors that could impact on this, however: the potential return of Jack Grealish (£7.5) from illness, and Spurs playing 120 minutes in Europe on Thursday.

Harry Kane (£11.5) is the standout captaincy pick for this week, but the England striker played the entirety of their 3-0 away defeat to Dinamo Zagreb. He will probably be fine for the weekend, but the impact on team sharpness and morale could play a big role on the contest. The absence of Son Heung-min through injury will also weaken them significantly.

Ollie Watkins (£6.6) hasn’t registered a big chance since Grealish got injured and has just two assists in his last five appearances. If Grealish was to return, however, that changes the dynamic of the match in this writer’s opinion.

José Mourinho also tends to set his team up in a more conservative setup in away matches, which leads me to believe we won’t see goals galore from Spurs this weekend. 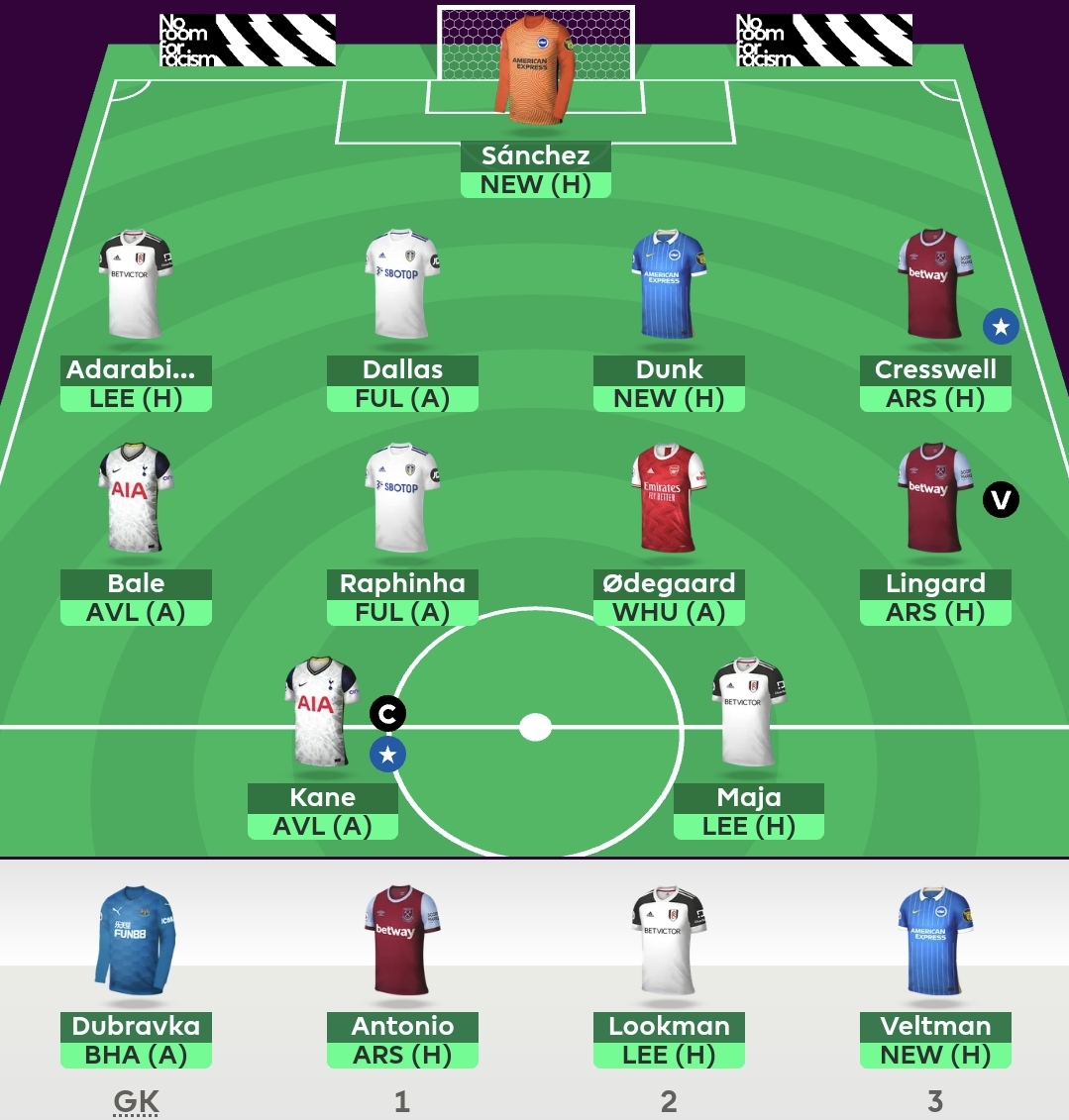 As the heading suggests, this is just my provisional Free Hit team. I’m not yet fully settled on captaincy, and I might also go without Arsenal players altogether.