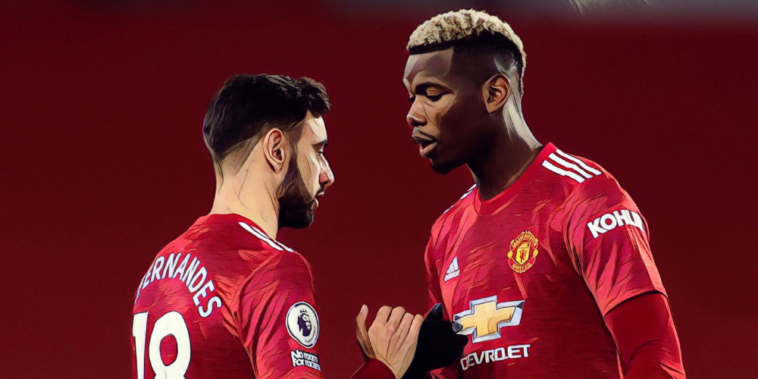 Bruno Fernandes reportedly wants Paul Pogba to sign a new deal at Manchester United before committing his long-term future to the club.

Fernandes has made a huge impact since joining Manchester United from Sporting Lisbon in 2020 and the Red Devils are keen to reward the midfielder with a new deal, reports having suggested talks have been held over an extension that will double the star’s current wages.

The 26-year-old has scored 24 goals in all competitions this season with a further 13 assists, his performances having seen him emerge as one of the favourites for the PFA Player of the Year award.

His arrival has coincided with improvement from Ole Gunnar Solskjaer’s side who sit second in the Premier League at present, though the Sun are reporting Fernandes wants to see United’s level of ambition before penning a new deal.

That reportedly includes securing the long-term future of Pogba, who has been continually linked with a move away and will have just a year remaining on his contract this summer.

Fernandes believes retaining the services of the France international – who has been linked with Real Madrid and Juventus over the past 18 months – is key to the Red Devils’ hopes of bridging the gap to champions elect Manchester City.

Despite claims from Pogba’s agent, Mino Raiola, that his career with the club was ‘over’ in December, the midfielder appears more settled at Old Trafford than in recent years and is understood to be confident the side are making progress.

The Frenchman recently praised the man management of Ole Gunnar Solskjaer compared to his predecessor, Jose Mourinho, comments which were interpreted as another show of his happiness at the club.

United travel to face Leeds in the Premier League this weekend before hosting Roma in the first leg of their Europa League semi-final on Thursday night.