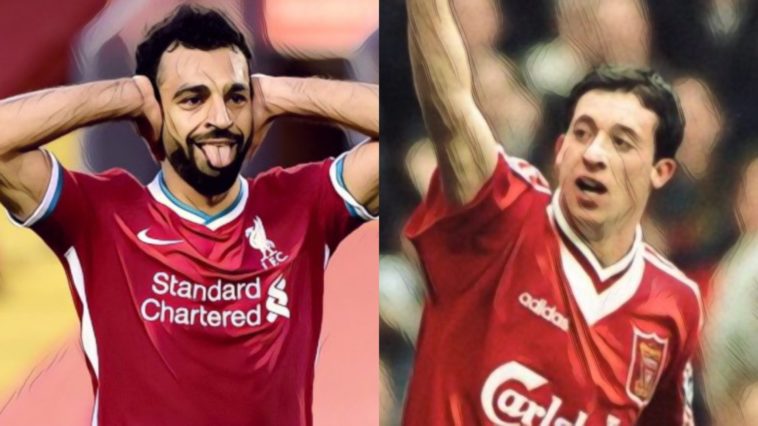 By finding the net against local rivals Everton, Mo Salah became the 17th Liverpool player to reach 100 goals during his time at the club.

It’s a sensational landmark for a player who has reached phenomenal heights since joining the Merseyside outfit in 2017, winning both the Champions League and the Premier League while dazzling crowds with his superb skill and incredible quality on the pitch.

The Egyptian winger reached the milestone in just 159 matches, making him one of the fastest players to reach a century in the club’s history. But how does he compare to Liverpool’s quickest centurions?

Known fondly as “God” among the Anfield faithful, the Toxteth lad burst onto the scene as an 18-year-old, scoring on his debut against Fulham in the League Cup in 1993 before scoring five against them in the second leg.

Robbie Fowler clearly started as he meant to go on, scoring 12 goals in his first 13 games for the club and quickly garnered a reputation as one of the league’s most natural finishers.

The striker would go on to score 183 times for Liverpool, making him the club’s sixth-highest goalscorer in its history and a beloved figure on the Kop as his goals led the team to glory in the Uefa Cup, FA Cup and twice in the League Cup.

You might not recognise the name, but Sam Raybould was a prolific striker in the early 1900’s for Liverpool, setting records that lasted for decades and, in one case, well over a century.

The Staveley native scored 128 goals in 226 appearances for the Reds, meaning he scored once every 1.76 matches. He was the first player to reach a century for the club and it only took him six years to do it.

Raybould was the first Liverpool player to score a hat-trick against Manchester United, he scored the quickest ever goal in a Merseyside Derby, finding the net after 30 seconds against Everton, and he set the record for most goals in a single league campaign, scoring 31 goals in 1902/03. Amazingly this stood until 1931.

Raybould is still the tenth-highest goalscorer in their history. His 67 goals were the most any Liverpool player had scored in their first 100 games until Mo Salah managed to better it earlier this year.

Patrick Berger: The highs and lows of Liverpool’s Czech mate

In 2017 Mo Salah joined Liverpool for a then-club record transfer fee of £38m plus add-ons, but that has looked like a bargain ever since. In each season he has scored at least 20 goals in all competitions, with his highest tally coming in 2017/18 when he found the net a ridiculous 44 times.

Having scored his 100th goal in the Merseyside Derby, Salah is now the club’s 16th-highest goalscorer having scored at a rate of a goal every 1.6 matches. He will soon catch up on John Barnes’ 108 goals, but at the age of 28 he will surely end up much higher on this list whenever he leaves the club.

A teammate of Sam Raybould, Jack Parkinson also scored 128 goals for Liverpool according to LFCHistory. Alongside Robert Robinson, the three comprised a formidable frontline that could arguably be comparable to the one Liverpool line out today.

Incredibly, Liverpool were relegated in 1903/04 just as Parkinson was breaking into the team, largely thanks to Raybould missing four months of the season due to injury. They bounced right back up though, with Parkinson scoring 21 goals in 23 appearances.

The Reds won the First Division title in their first year back, although Parkinson was ineligible for a medal as he only played in nine matches after sustaining a broken wrist against Woolwich Arsenal.

A local lad who born in Bootle, Parkinson’s most prolific campaign came in 1909/10 when he scored 30 times in 31 games, before going on to score a further 43 goals over four years for the club.

Liverpool’s second-highest goalscorer to this day, Roger hunt scored a mammoth 285 goals for the Merseyside outfit during an 11-year spell at Anfield, reaching his first century in just 144 games.

‘Sir Roger’ was Liverpool’s leading goalscorer for eight consecutive seasons during the sixties, winning the First Division twice and the FA Cup in 1965, scoring in the final against Leeds United. Hunt also played in all six of England’s matches on the way to glory in the Fifa Men’s World Cup.

Although Ian Rush overtook him as Liverpool’s leading all-time goalscorer in 1992, Hunt still holds the record for most league goals for the club with 244.

The legendary Bobby Moore once said “Roger Hunt is a player’s player. He is possibly appreciated more by those who play with him and against him than by those who watch him.”