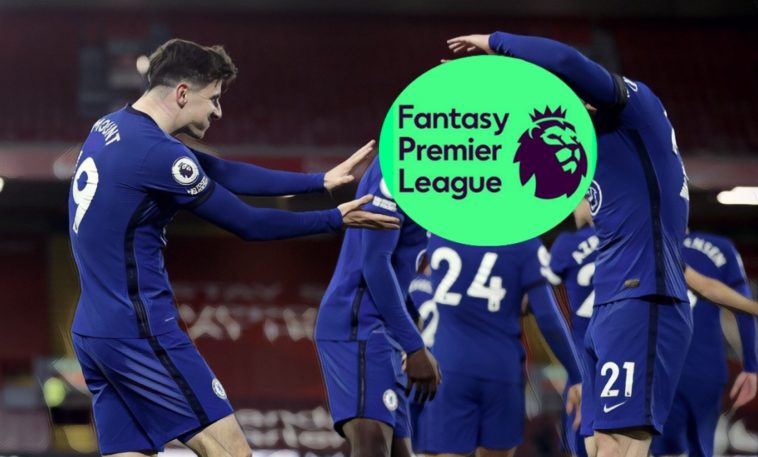 As we have now entered the final third of the Fantasy Premier League season, it’s time to knuckle down and figure out a way to close the gap on the top managers in FPL.

That’s why this week’s essential tips and advice on FPL transfers and captaincy is taking a particular interest in differentials ahead of gameweek 27.

All of the players mentioned here are owned by less than ten percent of FPL managers, which could help you move away from the template assets and towards a more unique squad.

It doesn’t always pay off, but when a differential returns it can reap massive dividends in terms of points and green arrows.

Chance it on Chelsea

Chelsea’s 1-0 win over Liverpool at Anfield was just the latest showing of defensive solidity under Thomas Tuchel. Since the former PSG manager succeeded Frank Lampard in January, his side lead the league for goals conceded (2), clean sheets (6) and the fewest shots conceded in the box (29).

The transformation in the South London outfit’s playing style in such a short space of time has been remarkable. Although not always the most fun to watch, his approach turned the team into a consistent and obstinate opponent. This makes their defenders particularly attractive in FPL.

The backline has not been completely settled under Tuchel, however, as the German has not picked the same backline twice in the league since coming in. Regulars under Frank Lampard such as Ben Chilwell and Kurt Zouma haven’t seen much action, while Reece James is still getting minutes but isn’t a guaranteed starter anymore.

The two nailed-on starters appear to be Antonio Rüdiger (£4.6) and Cesar Azpilicueta (£5.7), who have played every minute of Tuchel’s first eight matches in charge. Having just returned a very impressive 14 points in DGW26, Rüdiger is an absolute steal at his price.

Marcos Alonso (£5.7) is another one the new manager has leaned on, although he seems to get rotated out for every third league match. As an attacking wing-back he is hugely attractive in FPL terms, but probably not reliable enough in terms of minutes.

I wasn’t entirely sold on bringing in a Chelsea attacker, but Thursday night’s game may have convinced me otherwise. Mason Mount (£6.8), who has been the Blues’ best player this season, scored a fantastic goal against Liverpool. It was his third in the last five matches and fifth for the campaign.

The Englishman’s underlying numbers suggest this isn’t a fluke. Over the last five games, we can see that Mount is getting more high quality chances than he was earlier in the season:

Given that Mount took the spot kick against Southampton recently suggests that he is on penalties when Jorginho is not on the pitch, an added bonus to owning the midfielder.

Chelsea don’t have a fixture in GW29, but their next five games are quite nice, facing just one current top six side in that run.

Nicolas Pépé (£7.6) has been a point of derision since joining Arsenal in 2019, mostly because he arrived from France with a massive price tag and wasn’t able to live up to it.

The winger has been far from a viable fantasy asset either, due to his poor returns and unfathomably high value (he started last season at £9.5 and this one at £8.0). But is he finally showing he can be a reliable FPL player?

Pépé is on good form at the moment, having scored in four of his last seven starts in the Premier League. His goal against Leicester was his fifth of the campaign, equalling his tally from last season already.

The most encouraging thing about Pépé’s progress this season is that he’s trying to become more of a danger in the penalty box than in his first year at Arsenal. Comparing his numbers from last season to this, it’s clear he is concerned less with creating opportunities for others and more with getting on the end of high quality chances:

That’s exactly what you want to see from him, particularly as an FPL manager. The Gunners have plenty of players now who move the ball forward and get it into the box, such as Bukayo Saka, Martin Odegaard, and Emile Smith-Rowe, so Pépé can just focus on scoring.

Arsenal’s next opponent is Burnley, who have been playing wide open lately. The fixtures do get tricky after that, but the North London outfit is one of only eight teams playing in GW29, so he’s definitely worth considering if you no longer have a Free Hit chip.

Fantasy Premier League: Four of the best captains for gameweek 27

Another side who are playing in GW29 are Brighton. Now investing in relegation-threatened teams is generally not a recipe for success in FPL, but their underlying numbers suggest they might be worth punting on.

As I wrote about earlier this week, Brighton are the expected goals champions; outplaying their opponents by creating more high quality chances while also not conceding very many, but failing to to get the results that reflect their performances.

They’ve managed to keep eight clean sheets regardless of their hard luck, and their defensive statistics are mightily impressive. The Seagulls have conceded the third-fewest expected goals (25.74 xGA), third-fewest shots (237) and fourth-fewest shots in the box (153).

Despite their struggles of late, there is definitely something there to hang your hat on. Lewis Dunk (£4.9) is the pick of the backline, as he carries a goal threat in the air having scored three times this season. He’s also, as we saw in chaotic circumstances in GW26, on direct free-kicks the odd time.

Ben White (£4.4) is cheaper and also nailed, but less likely to rack up points. If you’re in the market for a super cheap differential, then Dan Burn (£4.2) could be the enabler for you. He has played every minute of the last five league matches.

Robert Sanchez (£4.5) is also a great option for a second goalkeeper in your squad, and has picked up as many bonus points as clean sheets (6) since taking over from Maty Ryan as the number one.

Brighton’s GW29 fixture is the main reason I’m highlighting their defence and why I’m going to bring in at least one, if not two, of their defensive assets on my Free Hit that week. They will face Newcastle United, who are missing Callum Wilson, Allan Saint-Maximin and Miguel Almiron through injury.

Their next two games before then are also nice on paper, as they take on a Leicester team without James Maddison and Harvey Barnes before facing an out-of-sorts Southampton. That’s a really good three-game run, offering up a great opportunity for FPL managers to gain ground in the final third of the season.

Before leaving this column, I just had to suggest a proper differential for captaincy: Manchester City’s Ruben Dias (£6.1).

Now, one of the golden rules of FPL is never captain a defender. One goal conceded can ruin everything and, of course, they’re likely not going to get an attacking return. It rarely pays off.

With Man City having a double gameweek in GW27, their assets are prime picks for the captain’s armband: Kevin De Bruyne, Ilkay Gundogan, Raheem Sterling.

But why should their defenders be discounted from that conversation? City are the best defensive unit in the league, and although the league leaders are on an amazing winning run, their attack isn’t lighting it up with goals galore.

Yes, Dias could be rotated, but knowing Pep Guardiola as we do, so could any of the three players I mentioned. In fact, they are all in greater danger of being rested than the Portuguese, who has started all but one game this season.

In the first DGW of the campaign, Dias came away with an assists, two clean sheets and three bonus points for an 18-point haul. In DGW26 he scored a goal and kept a clean sheet for 12 points. Imagine another score like that with him as your captain?

We cannot ignore DGW24, however. Dias was rested for the Spurs game and conceded against Everton for a disappointing two-pointer. But if I’m being honest, I like his odds of returning – and I’m seriously considering giving him the armband in GW27.