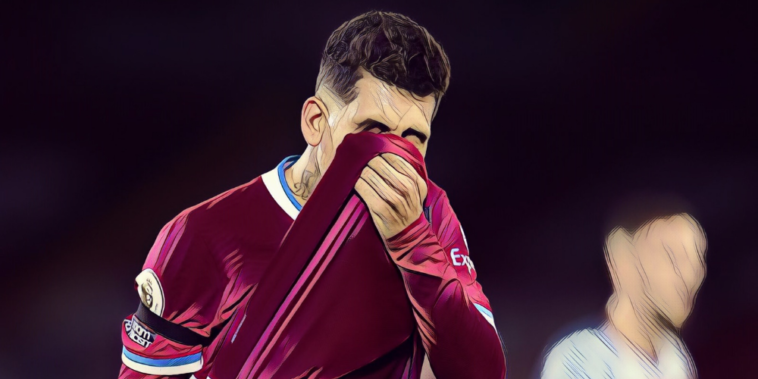 After waiting three decades to win the league title, Liverpool’s reign as champions of England looks set to be short-lived with the club’s defence of the Premier League title having been both arduous and disappointing.

Rival fans have revelled in the faltering fortunes of Jurgen Klopp’s side this season, the extenuating circumstances regarding their demise not enough to stop the gleeful taunts towards a side some had declared one of the Premier League’s finest title winners just a matter of months ago.

The narrative of the campaign has been the decimation of Liverpool’s defensive options this season, sparked by Virgil van Dijk’s season-ending injury in September and followed by the extended absences of Joe Gomez and Joel Matip, leaving the Reds without each of the senior centre-back options that started the season.

Liverpool left themselves short after sanctioning the sale of Dejan Lovren last summer without signing a replacement, but few could have envisaged the level of misfortune that any side would find difficult to navigate.

Amongst the defensive crisis and an ever-prickly Jurgen Klopp has been the lacklustre showings of the club’s once fabled front three, Mohamed Salah, Sadio Mane and Roberto Firmino having starred in tandem since being united following the former’s arrival from Roma ahead of the 2017/18 season.

Since then it has been back-to-back Champions League finals and a long-awaited Premier League triumph, though the irresistible performances of the trio – Salah’s remarkable goalscoring consistency aside – have waned this season with questions beginning to be asked whether this is the end for Liverpool’s attacking triumvirate.

Firmino, it appears, is the player who has come in for the most criticism, with his enigmatic role in the champion’s side having polarised opinion, largely from those outside of Anfield who quantify quality with tangible, statistical evidence.

Firmino’s role for several seasons has been unique as the non-prolific leading line of Liverpool’s attack, a footballer whose fluid movement and insatiable appetite for hassling opposition defenders provided the Reds with the perfect starting point for their counter-pressing play.

It mattered little that the Brazilian was only sporadically on the scoresheet, such was the club’s continued run of results and the goalscoring form of both Mane and Salah who often darted from wide into the spaces the free-roaming Firmino vacated.

As results have stagnated the spotlight has only increased on Firmino’s goal record, however, with his performance against Sheffield United on Sunday perhaps encapsulating why this may be the time for change.

The 29-year-old’s fleet of foot and deflected strike off Kean Bryan ensured Liverpool left Bramall Lane with all three points, but it was two glaring misses which will live longest in the memory.

The first saw Firmino shoot straight at Aaron Ramsdale when through centrally on goal, before inexplicably attempting to square the ball to Mane when presented with a gaping goal just yards out.

That latter moment looked like a player who had lost confidence in his goalscoring touch and the numbers do not make for good reading, Firmino’s figures having dwindled since a career-best campaign in 2017/18 that delivered 27 goals in all competitions.

Since then the forward’s number of goals per 90 minutes have dropped in each league season, his record for the current campaign standing at just six in 26 Premier League appearances.

Interestingly, the star outperformed his xG during that 2017/18 league campaign (15 goals from an xG figure of 11), something he has been unable to repeat in each of the past three seasons.

In fact, his finishing has been of significantly lower quality than what has been expected.

One reason for this has been his erratic shooting with his shots on target percentage having fallen in each season, the 2017/18 season saw the Brazil international hit the target with 43.2% of his efforts, a statistic which dropped marginally to 42.5% the following season.

Last season that figure dropped markedly to 37% and has fallen once more this time around to 36.5%, an inability to regularly hit the target only adding to the criticism and scrutiny on Liverpool’s number nine.

Quantifying Firmino by the simple metric of goalscoring is missing the point entirely given his selfless and unique role to the side, but perhaps an even more concerning statistic is the fall in his numbers when it comes to pressing from the front.

Firmino has long been regarded as the best of his type in leading the press from the front, but he has been significantly outworked by both Salah and Mane this season when it comes to pressures in the final third and trails his two teammates for successful pressures.

He remains the leader for tackles attempted in the final third amongst all Premier League players, but a decrease in his ability to pressure opponents tirelessly points towards a player who has ran himself into the ground over the past few seasons.

It is a notion that is backed by the eye test.

The height of Firmino’s pressing play came in 2018/19 as he averaged a huge 25.3 pressures per 90 minutes, including 7.24 successful pressures and 10.4 final third pressures.

Those statistics have dropped in each of the past two seasons, averaging just 15.9 pressures per game so far this season, with only 4.65 successful and 6.58 in the attacking third.

Firmino’s dwindling numbers for goals and pressures has led to greater questions than ever about his role in this side, the impending return of Diogo Jota from injury only likely to add to the pressure on the former Hoffenheim star’s shoulders.

Jota made a brilliant start to his Liverpool career before being struck down by a knee injury in December, scoring five league goals – just one short of Firmino’s season tally – in just five starts after signing from Wolves.

The Portugal international’s haul has incredibly come from an expected goals figure of just 2.4, a sign that the forward was putting away chances that lesser stars would be expected to squander.

Jota’s xG has largely coincided with his goal return since first arriving into the Premier League, and a player described as a ‘pressing monster’ by club figures earlier this season has outperformed his under-fire teammate for both pressures per game and final third pressures.

Comfortable in any three of the forward positions the 23-year-old was the perfect signing to add further guile and graft to the Reds’ options, but a new arrival may be needed ahead of what promises to be a fascinating summer.

The signing of Takumi Minamino did not work out as hoped with the Japan international currently on loan at Southampton with a point to prove, whilst Divock Origi looks likely to move on at the end of the season with his cult status intact.

Firmino remains a fine player but his days of leading the Liverpool line look numbered, a change in role the Brazilian – perhaps as a deeper creative presence which alleviates the goalscoring pressure –  sensible given his waning ability to convert chances into goals.

Signing a like-for-like replacement appears impossible if such change occurs and it makes little sense for Klopp’s recruitment team, a change in style arguably the way forward with the signing of a genuine number nine.

Liverpool’s recruitment staff overlooked Erling Haaland when signing teammate Minamino from Red Bull Salzburg in January 2020, but the forward’s incredible rise since moving to Borussia Dortmund means that each of Europe’s elite are monitoring developments closely.

Klopp will have also taken note of how Pep Guardiola has transformed and altered Manchester City this season and the struggles of Liverpool point towards tweaks being made as the Reds bid to gear up following a season of disappointments.

Taking the brave decision to break up a forward line that has served so well may just be the first step.

Read Also – Have people been too hasty in critiscising Liverpool’s Thiago Alcantara?