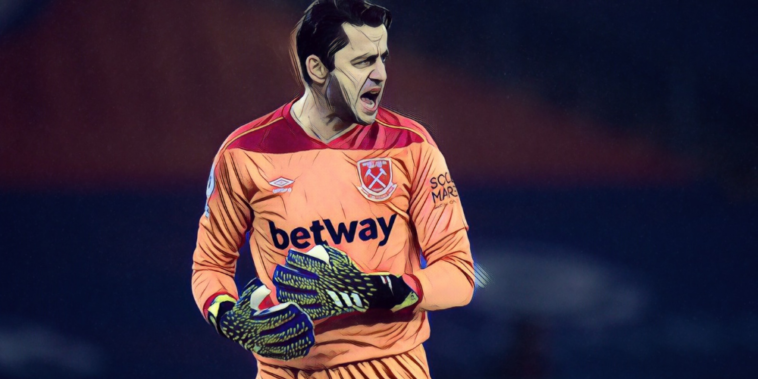 Lukasz Fabianski insists West Ham are not thinking about Europe despite their place in the Premier League’s top four and has discussed the club’s ‘efficient’ style of play.

West Ham have made huge progress under David Moyes this season after narrowly avoiding relegation last term, an encouraging run of performances having lifted the Hammers into the top four to raise hopes of securing Champions League qualification.

Moyes’ side have lost just one of their past 11 league fixtures and have won seven out of nine since the turn of the new year, with Fabianski discussing his side’s consistency and ability to ‘mix up’ their style of play to secure results.

“At the moment I think we are very efficient in the way we play out football,” he told whufc.com. “We understand our strengths and weaknesses and we try to be very quick in our transitions, for example, and effective in the way we attack the opponents’ box.

“What has been good this season has been that we’ve been able to mix up our styles and we’ve sometimes been more direct and sometimes kept possession of the ball a lot more and tried to penetrate teams with some nice passing and find solutions in that way.

“What you get from us so far this season is that we’ve been kind of able to adapt to each game and that’s been very helpful for us.”

The Poland international says West Ham have focused on becoming ‘difficult’ opponents this season and says the Hammers have the ability and players to ‘physically’ match any side in the division.

“What you are always going to get from us is that we’re going to perform and give the opponents a very difficult time,” he added.

“Physically, we’ve been able to compete against anyone, despite playing every three days, and push our opponents.

“With us, you know we’re going to be tough and hard to beat and we’re very consistent when it comes to that.”

Despite the club’s impressive form and current position in the Champions League places, Fabianski insists West Ham are not ‘thinking about the possibility of European football at the moment’, though says confidence is increasing around the London Stadium.

“I don’t think we are thinking about the possibility of European football at the moment, if I’m being honest, at least me personally,” he explained.

“I think our approach so far this season has been just to prepare well for each game and do our best in each game.

“What has been clear to see as the season has gone on is that we feel more confident in ourselves when we play each game, so we feel we can compete against anyone.

“I think that helps us a lot in the way we start and the way we perform in each game. It doesn’t matter if we play away or at home, I believe in almost every single game we’ve been able to compete, so that’s a really positive sign.

“Something like this gives us confidence for the remainder of the season and hopefully we will keep that on a really good level.”