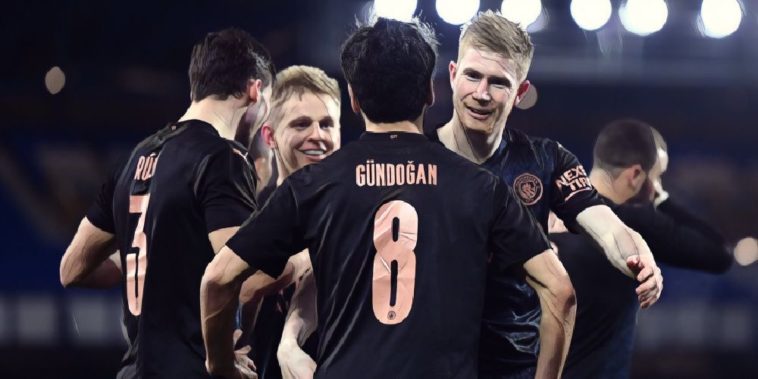 Manchester City booked their place in the FA Cup semi-finals for a third successive season, scoring twice in the last six minutes to beat Everton 2-0.

Man City came into the game bidding to win an unprecedented quadruple of honours, while Everton were looking to land their first piece of silverware since they last won the FA Cup back in 1995.

The Toffees were, however, forced to sit deep right from the off as City dominated possession in trademark style, the hosts keeping it compact at the back and restricting the Premier League leaders to just one effort from outside the area which was routinely collected by third-choice ‘keeper, Joao Virginia.

The Portuguese was however forced into a more impressive save just before the hour mark, diving to his left to tip a Raheem Sterling effort round the post.

City kept pilling men forward, with Aymeric Laporte marching forward out of defence, and with six minutes remaining, Pep Guardiola’s side got the reward for their persistence. Laporte drove forward, exchanged passes with Kevin de Bruyne before seeing his effort tipped onto the bar by Virginia, only for Ilkay Gundogan to react the quickest to head his side in front.

The 2018/19 FA Cup winners would extend their lead in the 90th minute, substitute Rodri playing a first time ball over the top of the Everton defence to find the run of De Bruyne, the 29-year-old advancing into the box, shifting the ball onto his left before tucking past the young ‘keeper.

No player created more chances for Man City vs. Everton than Kevin De Bruyne (2) despite coming on in the 80th minute.

He had a hand in the first and scored the second himself. pic.twitter.com/3MIm8z04sS

Speaking after the game, Pep Guardiola was delighted with his side’s patience against Everton’s compact side, the Catalan describing it as ‘one of the toughest games’ they’ve played in recent months.

“It was a really tough game,” he told BT Sport. “We saw the commitment from Everton, how focused they were, they defended really aggressively.

“We have been incredible in terms of results and performances [over that period].

“Tonight was so difficult, they have experienced players behind the ball with two up for [the] counter-attack.

“It was incredible commitment from my players. An incredible victory.”

Next up for City following the international break is a trip to face third placed Leicester in the Premier League.

“Hopefully the bubbles [during the international break] are controlled. I’m looking forward to everyone coming back safe.”