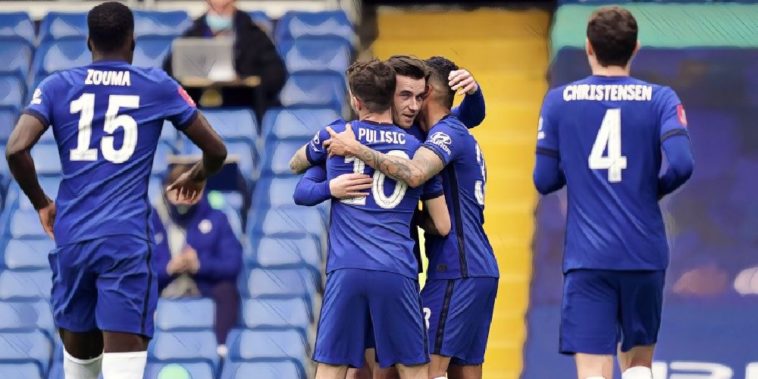 Chelsea made it through to the FA Cup semi-finals for a fourth time in five seasons, beating Sheffield United 2-0 at Stamford Bridge.

Sheffield United started the game brightly before Chelsea finally started to exert their superiority on the tie after around 20 minutes, and it didn’t take long for them to make that pressure count. A Mason Mount corner was only cleared to Ben Chilwell whose effort from the edge of the box was turned into his own goal by the outstretched leg of Oliver Norwood.

In all honesty, there wasn’t a great deal of quality from either side in the first half, with both sides giving the ball away cheaply on a number of occasions.

Sheffield United came out with a bit more purpose after the interval, and largely looked the most likely to score, though Christian Pulisic did have a shot saved by Aaron Ramsdale early on for the hosts.

David McGoldrick squandered a wonderful opportunity to draw the game level, finding himself in a yard of space at the back post, getting on the end of an inviting cross from John Lundstram, only for the Ireland international to put his header back across goal and wide of the post from inside the six-yard box.

Oli McBurnie forced a save out of Kepa Arrizabalaga shortly after from the edge of the box, while summer signing Rhian Brewster saw an effort deflected into the side netting as the game ticked into added time.

Despite the Blades’ chances, it would however be Chelsea who made sure of their progress in the 92nd minute, Chilwell’s cross being controlled by Hakim Ziyech before the Moroccan fired past Aaron Ramsdale.

The win means Chelsea are now unbeaten in 14 games since Tuchel’s appointment, and the German said he felt his side ‘looked tired’.

7 – Chelsea have kept a clean sheet in seven successive matches, their longest run since December 2005 (also seven); they've only had one longer run in their history – nine games ending in December 1905. Impenetrable. pic.twitter.com/yl6fTOUz5x

“Sounds excellent to say we’re through to the semi-finals – it was a tough match,” he told the BBC. “We had a good first half where we controlled everything.

“We lost control in the second half, we were clearly tired. After 14 consecutive matches I could feel we were tired and we made many little faults. We were lucky to keep the clean sheet in the second half but I think it’s the first time in the 14 games we have looked tired. It’s important to go through in the cup and that was the target and we reached it.

“We let them come back because we had full control in first half and second half a big chance with Christian Pulisic to finish the game early. We made too many easy mistakes and lost duels and lost some momentum.

“I could tell in training we were tired and there was a lack of concentration. That can happen sometimes it gets harder to keep the level up – I’m happy we could help from the bench and in the end we have the win so we take that.”

Next up for Chelsea following the international break is a home game against West Brom.