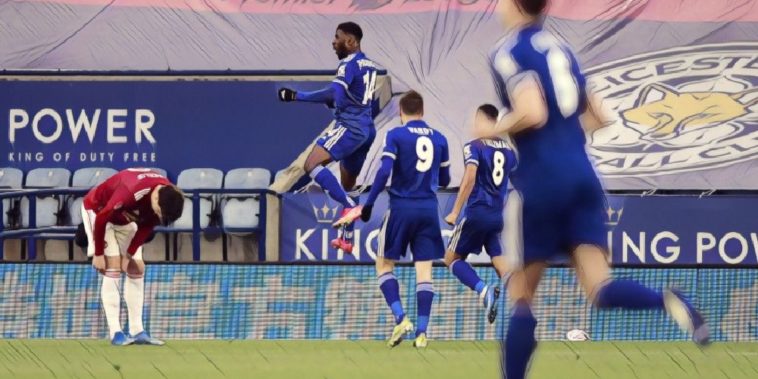 Manchester United’s long unbeaten run away from home came to an end with a 3-1 loss to Leicester City as they crashed out of the FA Cup at the quarter-final stage.

There were plenty of moments of sloppy play in the opening passages, and in the 24th minute it was a moment of sloppiness that brought about the opening goal of the game. Harry Maguire fed the ball into Fred, though with the Brazilian under pressure, he opted to pass back to goalkeeper, Dean Henderson. That pass was however woefully underpowered, leaving Kelechi Iheanacho to nip in to steal the ball, round the keeper and poke home in what was a moment to forget for the Manchester United backline.

The Red Devils haven’t been at their flowing best for a number of weeks, though would haul themselves level seven minutes before the break. Paul Pogba, playing on the left of midfield, dropped his shoulder to beat his man before playing the ball across the box towards Donny van de Beek. The Netherlands’ international opted to leave it with Mason Greenwood just behind him and the 19-year-old netted his first goal in 13 outings with a first-time finish.

Leicester didn’t waste any time in retaking the lead after the interval though, Youri Tielemans playing a one-two around Nemanja Matic before driving towards the United box. The Belgian was allowed to continue his run with nobody in red getting in a challenge on the 23-year-old, who fired across Henderson’s goal and into the bottom corner.

Despite a bright opening 15 minutes or so, Manchester United were poor for large spells of the game, and despite Ole Gunnar Solskjaer making four changes at once after an hour, the pattern of play was largely unchanged.

The Foxes would extend their lead with 12 minutes to play, a Marc Albrighton free-kick being totally misread by Scott McTominay at the back post to leave Iheanacho to head home his second of the game and his seventh in his last four.

Kasper Schmeichel kept out a late Bruno Fernandes free-kick, though, in truth, the visitors rarely threatened the Danish ‘keeper’s goal as Leicester booked their place in the last four for the first time since 1982 where they will face Southampton at Wembley.

Speaking after the game, United boss Ole Gunnar Solskjaer said his side lacked ‘spark’, blaming their midweek trip to face AC Milan for their lack of ‘zip, authority and confidence’.

“We didn’t have the spark tonight – but it’s understandable,” he told the BBC. “This team have been fantastic in the last three or four months. We played every three days and been on a great run. It just caught up with us, all the games and travels. Thursday night in Milan was a big night and took a lot of out of us physically. We didn’t have the extra zip, authority and confidence today.

“We tried to get on the front foot and start well because sometimes you can get that adrenaline boost and confidence if you get a goal and that can carry you over the line. We’ve got too many players that have played too many games and too many that haven’t really had much football, Anthony Martial, Donny van de Beek, Paul Pogba and others are trying to get in who haven’t had enough football. We didn’t have enough against a tough team.”

The Norwegian made a number of changes from the side that beat AC Milan 1-0 on Thursday, though he defended his decision: “I would’ve done the same again, the changes were necessary to do. We knew Paul [Pogba] wouldn’t last more than an hour and I don’t think I would do anything differently. What goes on behind the scenes isn’t always known.”

Asked about his sides mistake in the buildup to the first goal, he added: “We want to build from the back and want the players to be confident – sometimes it doesn’t work and that’s one time it didn’t.

1 – Manchester United have lost an away match against English opposition for the first time in 30 matches, with the previous such defeat coming against Liverpool in January 2020. Closed. pic.twitter.com/OAGxOKEuke

“When we win, we win together and when we lose, we lose together. We’re not pointing fingers and blaming – the second one is a good goal by the boy but maybe with a zip of energy we could’ve got to him and wouldn’t have been done as easily in the middle. That’s been one of our strengths, keeping clean sheets and been dogged but we didn’t have the opportunity.”

Despite exiting the cup, Solskjaer was still positive about his side’s season, the club still second in the Premier League and having qualified for the last eight of the Europa League where they will face Spanish side, Granada.

“We’ve got the Europa League and Premier League to concentrate on – yes we would’ve liked to go to Wembley but now all the focus is on the games we do have. We’re in a good position in the league and we want to keep improving, of course Leicester are just behind us so it won’t be easy but we want to keep going and get as far as possible in the Europa as well.”

Next up for United after the international break is a home game against Brighton.