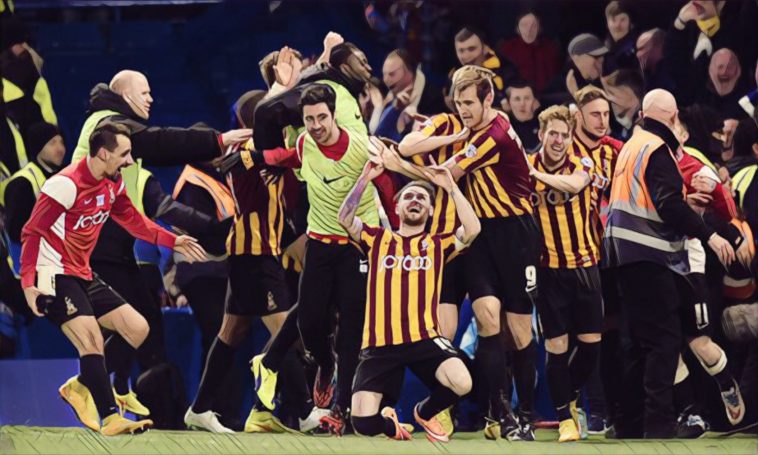 The FA Cup returns this weekend with the fourth round proper of the 2020/21 edition of the competition, featuring a mouth-watering tie at Old Trafford, where Manchester United host Liverpool, and a potential giant-killing at Whaddon Road, where fourth tier Cheltenham Town host the juggernaut that is Manchester City.

Even though the FA Cup may have lost its shine in recent years, it is still the oldest cup competition in the world and has provided us with some memorable days over the years, and arguably none more so than January 24, 2015.

With Louis Van Gaal’s Manchester United drawing 0–0 away at League Two Cambridge United the night before, the world turned its attention toward Saturday’s fixtures, and with Chelsea, Manchester City and Liverpool all hosting lower league opposition, the prospect of a giant-killing loomed large.

Blues boss Jose Mourinho would have been well aware of his opponents’ cup pedigree, as Bradford City travelled to Stamford Bridge with their League Cup exploits two years previously still fresh in the mind. The Yorkshire outfit went all the way to the League Cup final, seeing off Premier League clubs like Arsenal, Aston Villa and Wigan Athletic. The first fourth-tier side to reach a cup final in over 50 years, the Bantams were buoyed up by over 6,000 travelling fans, presenting the Premier League leaders with the clichéd banana skin.

With one eye on a League Cup semi-final against Liverpool taking place in midweek, Mourinho still named a strong team, despite making nine changes, with Oscar, Didier Drogba and Mohamed Salah all starting. The Special One’s decision to rotate his squad appeared to be rewarded after just 21 minutes when Gary Cahill nodded home from Oscar’s corner to give the Londoners an early lead. 17 minutes later, Ramires added a second, and it appeared as though the floodgates were open.

While the home fans were celebrating taking a two-goal lead and anticipating a cricket score, the FA Cup was busy delivering that magical thing that only it can deliver, and with a sprinkling of pixie dust, City had halved Chelsea’s lead. Three minutes after conceding, Filipe Morais’ free-kick from the right-hand touchline found its way to Jon Stead on the edge of the box, who managed to shift the ball on to his left foot before hammering it past Petr Cech, to the delight of the travelling army situated at the opposite end of the ground.

And with that, the League One side believed. They believed that today was to be their day. They came out for the second half with fire in their bellies, looking as if they would rather die on the pitch than lose, chasing every second ball and winning every 50/50. Their efforts were to be rewarded 15 minutes from time. James Meredith’s long throw from the left found James Hanson, who’s flick-on was parried by Cech straight into the path of ex-Chelsea man Morais, who couldn’t have wished for an easier opportunity. The Portuguese winger duly slotted home and the away end erupted. 2–2. Bedlam.

Mourinho responded, bringing on talisman Eden Hazard in the hope of stemming the tide, but the Blues were looking second best. The fight, the desire and the momentum was all in possession of the visitors, and they were rewarded. Seven minutes after equalising, they unbelievably took the lead. Great work down the right led to the ball finding Stead in the penalty area, who teed up Andy Halliday on the edge of the box, who smashed the ball into the top corner, past the despairing dive of Cech, and charged off into his adoring fans housed behind the goal. Cue pandemonium.

Mark Yeates sealed the victory for the League One side in the first minute of added time, rounding off a superb team move to curl home from just inside the penalty area, leaving the world stunned and wondering what it had just witnessed.

At the other end of the country, a similarly stunning turn of events were taking place. Reigning Premier League champions Manchester City were hosting Championship side Middlesbrough. Just as Bradford had done in London, Boro had amassed an army of their own, with 5,500 fans travelling from the North East in the hopes of seeing something spectacular. And just as Mourinho had done at the Bridge, City manager Manuel Pellegrini had also named a strong side, with Sergio Aguero, David Silva and captain Vincent Kompany all starting.

The Citizens couldn’t find an early goal as Chelsea had done though, and the game was finely poised at 0–0 as the second half got underway. The game wouldn’t remain level for long, however, as a game of head tennis in the Manchester City half ended with Adama Traore bearing down on the City goal. Goalkeeper Willy Caballero managed to stop the Spaniard in his tracks, only for the ball to fall to on-loan striker Patrick Bamford, who bundled into an empty net and sparked raptures in the away end of the Etihad.

In scenes similar to those in the south, the Sky Blues tried to get back into the game but were simply second best, and Middlesbrough looked the most likely side to score next. Lee Tomlin had two fantastic chances to double the Championship sides lead, the second of which rattled Caballero’s right-hand post, before super-sub Kike made it 2–0 in the 93rd minute, sealing the result for Aitor Karanka’s side, much to the jubilation of their travelling 5,500.

As fans of Bradford and Middlesbrough can attest to, the magic of the cup is still alive and well. If we are to see anything even remotely as spectacular as that cold January afternoon 6 years ago, then this weekend will be a very special weekend indeed.

Read: Five of the best FA Cup finals ever: Comebacks, shocks and the Five Minute Final