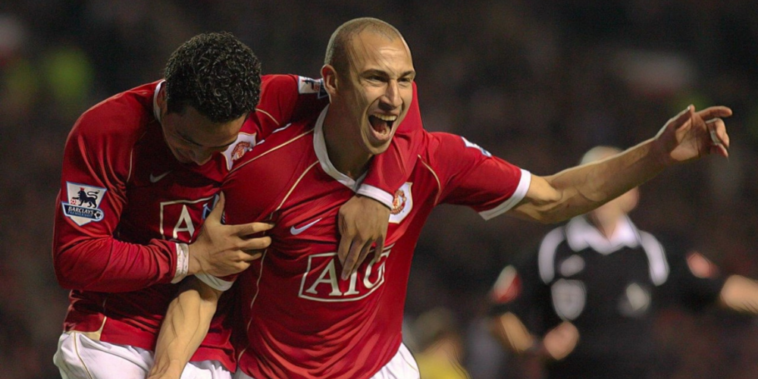 Manchester United have dipped into the loan market this month to bolster their squad, borrowing the services of Wout Weghorst and Jack Butland.

Each represent stop-gap signings from Erik ten Hag and his recruitment team, as the club look to continue their recent improvement and secure Champions League qualification.

Manchester United have loaned 12 previous players in the Premier League era and the temporary transfers have delivered largely mixed results.

Here are our ratings of every loan signing Manchester United have made in the Premier League era.

United signed the teenage forward on loan from Gillingham ahead of the inaugural Premier League campaign in 1992/93, with a view to a permanent deal after Arnott had impressed during a breakthrough campaign at The Gills.

He featured in the Blue Star youth tournament and scored two goals as United’s academy side reached the final, but failed to make a senior appearance for the Red Devils. Arnott returned to Gillingham at the end of the season and scored 12 goals in 73 league games. He later had spells at a number of lower-league teams, including Leyton Orient, Fulham and Brighton.

Fraser Digby returned to Manchester United on a short-term loan in 1992, having been an apprentice with the Red Devils without making a senior appearance.

Digby had forged a senior career with Swindon before returning to Old Trafford on loan, but again failed to feature during a period spent as cover to Peter Schmeichel.

He returned to Swindon and spent more than a decade with the club, where he made 505 appearances in all competitions. Only three players have ever made more for The Robins.

Manchester United’s defensive options were depleted during the 1995/96 season, with Sir Alex Ferguson securing the services of William Prunier on a trial period to bolster his centre-back stocks.

Prunier had earned one cap for France and represented Marseille and Bordeaux before buying out his contract with the latter. He had expected to feature for the reserve side as he sought to win a permanent contract, but was thrust into the side with Steve Bruce, Gary Pallister and David May all unavailable.

A positive debut against QPR followed, before a disastrous day at Tottenham saw United thrashed 4-1 in north London. Prunier – part of a makeshift side after Peter Schmeichel, Paul Scholes and Denis Irwin had also joined a long list of absentees – was largely scapegoated for the loss and never featured again. He returned to France, having failed in his audition to be the ball-playing defender Ferguson had craved.

Andy Goram was a surprise signing for Manchester United during the 2000/01 season, as the Red Devils turned to the Rangers legend to solve their goalkeeping issues.

Injuries to Fabien Barthez and Raimond van der Gouw, coupled with Mark Bosnich’s departure, had left United without a senior option and the club turned to a veteran name well into the twilight of a memorable career.

Andy Goram making one of his 2 appearances for @ManUtd during his short loan spell at the club in 2001 🏴󠁧󠁢󠁳󠁣󠁴󠁿 pic.twitter.com/fDIDEO13GH

“Goalie, I want you to come down for three months on loan,” Ferguson said. “Fabien Barthez is injured and Raimond van der Gouw is injured. We’ve got Bayern Munich [on] Wednesday and Liverpool [on] Sunday.”

Ferguson called back two minutes later with a rather blunt message for his prospective signing, giving Goram a short deadline to agree to a deal: “You’ve got ten seconds to decide yay or naw, ya fat b*stard!”

Goram made just two appearances for the Red Devils and was substituted in both as United ensured the returning Van der Gouw was eligible for a Premier League winners’ medal.

Tomasz Kuszczak’s performances for West Brom attracted the interest of Manchester United, who signed the goalkeeper on an initial loan deal.

The Poland international was viewed as a potential successor to Edwin van der Sar, but failed to develop as hoped and made just 32 league appearances across five seasons.

Kuszczak aimed a dig at Sir Alex Ferguson upon his exit and claimed the Scot had held back his career with a lack of minutes. He signed for Brighton, before later spells with Wolves and Birmingham before retirement.

Manchester United had been long-term admirers of Henrik Larsson after the forward had scored 242 goals in 313 games for Celtic, before earning Champions League success at Barcelona.

Larsson’s career appeared to be winding down after returning to Sweden with Helsingborgs but Ferguson – in search of an edge for his side during the 2006/07 season – finally got his man, albeit on a short-term loan and aged 35.

Larsson made an immediate impact with a goal on debut against Aston Villa and scored three goals in 13 appearances as United on the Premier League. His contribution, however, was much more than those numbers with the Swedish star becoming a firm favourite at Old Trafford.

“On arrival at United, he seemed a bit of a cult figure with our players,” Ferguson said. “They would say his name in awed tones. For a man of 35, his receptiveness to information on the coaching side was amazing.

The Swede made his United debut #OTD in 2007, before scoring his final goal in the #UCL two months later 🇸🇪#MUFC | #GoalOfTheDay pic.twitter.com/NCdrMqTVC3

“At every session he was rapt. He wanted to listen to Carlos Queiroz, the tactics lectures, he was into every nuance of what we did.

“In training he was superb, his movement, his positional play. His three goals for us was no measure of his contribution.

“In his last game in our colours at Middlesbrough we were winning 2-1 and Henrik went back to play in midfield and ran his balls off. On his return to the dressing room, all the players stood up and applauded him and the staff joined in. It takes some player to make that kind of impact in two months.”

Carlos Tevez’s heroics at West Ham led to interest from Manchester United, after the Argentine had inspired the Hammers out of the Premier League’s relegation places.

The deal was a two-year loan that involved controversial third-party ownership, but Tevez proved a huge hit on the pitch at Old Trafford. His first season saw United win a Premier League and Champions League double, with Tevez scoring 19 goals as part of a formidable forward line featuring Wayne Rooney and Cristiano Ronaldo.

He scored 15 goals the following season as the Premier League was retained, but saw his minutes reduced following the arrival of Dimitar Berbatov. A fan favourite for his tireless work-rate and goals, he soured relations with the Red Devils after departing for Manchester City in 2009.

City stumped up the cash to purchase his rights from Kia Joorabchian’s Media Sports Investment and Tevez enjoyed the most prolific period of his career at the Etihad, netting 73 goals in 148 games after his controversial cross-town switch.

Not to be confused with the current AC Milan star of the same name, Leao signed on loan from Desportivo Brasil as a teenager in 2011, but failed to make the grade.

The Brazilian midfielder featured in the youth side alongside Paul Pogba and Jesse Lingard, but United opted against turning his temporary move into a permanent deal.

Radamel Falcao’s arrival caused a wave of excitement at Manchester United in 2014, as Louis van Gaal secured a loan deal for one of Europe’s top forwards.

Falcao had scored spectacularly during spells at Porto and Atletico Madrid, and signed on loan from Monaco for an initial fee of £6m with the option to make the move permanent for £43.5 million (€55 million) at season’s end.

The Colombia international had suffered an ACL injury the previous season and looked a shadow of his former self during a disappointing season in the Premier League. He scored just four goals and United chose not to turn El Tigre’s temporary move into a permanent one.

Falcao signed on loan for Chelsea the following season and fared even worse, scoring just once in 12 games for the west Londoners. A return to Monaco reignited his career, as he scored 70 goals across the following three seasons.

Another loan deal that caught even the transfer target by surprise, Andy Kellett thought manager Neil Lennon was ‘winding him up’ after interest from the Red Devils emerged.

The left-back had played just one senior game for Bolton and had been on loan at fourth-tier Plymouth earlier in the campaign, before making a switch to Old Trafford. He never made an appearance in the first team, but featured prominently as the u21 side won the Premier League title.

Odion Ighalo was parachuted back into the Premier League to solve United’s striker crisis in 2019/20, becoming the first Nigerian to represent the club in the process.

The former Watford forward had been increasing his bank balance after a lucrative move to Shanghai Shenhua, before taking a pay-cut to facilitate his ‘dream’ move to Old Trafford. The forward was far from a marquee arrival, but scored five goals in 19 games to earn a six-month extension to his loan deal.

He moved on in January 2021, signing for Saudi side Al Shabab on a permanent deal.

He made just two appearances for the Red Devils and produced unconvincing performances in the EFL Cup, before requesting a return to Newcastle after a lack of minutes at Old Trafford.

United have since signed Jack Butland on loan from Crystal Palace as a replacement for the Slovakian shot-stopper.