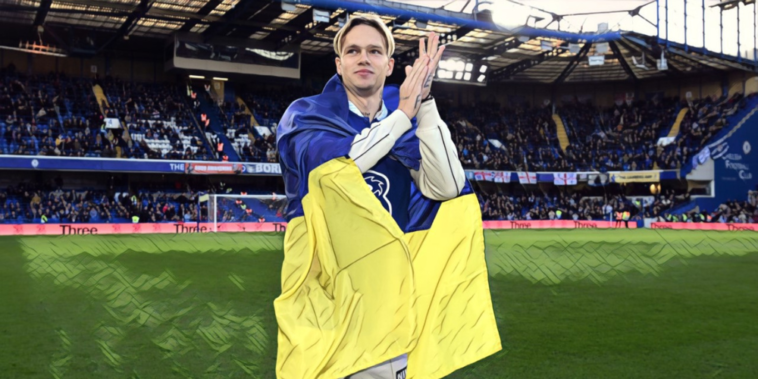 Chelsea are the big spenders of the transfer window once again after completing the signing of Mykhaylo Mudryk.

The deal for Mudryk concludes the saga of the winter window, with Chelsea having swooped in to hijack Arsenal’s move to sign the Shakhtar Donetsk starlet. Mudryk had appeared set for Arsenal, but the Blues’ talks proved persuasive and the 22-year-old was unveiled as the club’s £88m recruit at the weekend.

After also stealing a march on Premier League rivals to sign Joao Felix earlier in the window, it continues a trend of Chelsea snatching transfer targets late in the race.

Manchester United appeared the favourites to sign Arjen Robben from PSV Eindhoven, with the Dutch starlet given a tour of the club’s training ground in December 2003.

Robben held negotiations with Sir Alex Ferguson over a move to the Premier League, but a move failed to materialise as Chelsea – recently taken over by Roman Abramovich – stole in to seal a deal.

“I had a very good conversation with him (Ferguson) over dinner in Manchester and we spoke about football and life,” Robben recalled to FourFourTwo.

“I also went and had a good look around the training ground and everything was good, but after I went back to PSV nothing happened.

“There was no real contact and the deal didn’t happen. PSV were also negotiating with Chelsea at that time, so maybe they offered PSV more money? I don’t really know. I spoke to Chelsea and I liked their plans. We had one meeting and everything was done pretty quickly.

“Had Manchester United offered me a deal straight after I met them, I would have signed there, but it didn’t happen and I have got no regrets.”

Robben signed for Chelsea in the summer of 2004 and won back-to-back Premier League titles under Jose Mourinho during his three seasons at Stamford Bridge. He left for Real Madrid in 2007, before a decorated career at Bayern Munich that saw the Dutchman win eight Bundesliga titles and the Champions League.

Rarely has a transfer hijacking been quite as controversial as Chelsea’s deal for John Obi Mikel. Manchester United’s pursuit of the midfielder was so advanced that the Nigerian was unveiled as the club’s latest signing, with a contract signed and Mikel adorning club colours.

What followed was a memorable transfer tale, as Mikel – who had simultaneously agreed terms with Chelsea – claimed he had been pressured into signing for the Red Devils.

“I signed a contract with Manchester United and I didn’t do that of my own free will,” Mikel exclusively told Sky Sports News at the time.

“I was put under a lot of pressure to do that. I was denied advice from my agent and people I trust and I didn’t get much time to think about that.”

A legal battle ensued between the sides as each contested their right to the Lyn Oslo teenager. United had reached an agreement with the Norwegian side, while Chelsea had finalised terms with Mikel and his representatives.

Chelsea had helped facilitate Mikel’s move to Europe as a teenager and he had trialled at both Premier League clubs two years earlier. An intervention from Premier League chief Sir David Richards was required, one which resulted in Chelsea agreeing to pay Manchester United £12m for the rights to Mikel, with a further £4m sent to Lyn Oslo.

“He [Richards] offered to help me. He told me it was making enemies between the two big clubs,” Mikel told the Manchester Evening News.

“I told him I wanted to play for Chelsea and he said he would help resolve it. Then I had a secret meeting with Mourinho at his house. I had these two great managers wanting me and I did not know what to do. Fergie told me: ‘Why would you turn down United? It’s the biggest club in the world.

“You cannot do that. You have to say yes, If it’s money, I can give you what you want’, but it was never about the money. I had Barca waiting to pounce if the legal wrangle couldn’t be sorted, but felt obliged to sign for Chelsea as they’d looked after me.”

Mikel made 372 appearances across 11 seasons at Chelsea, where he won two league titles among eight major honours.

Rafael Benitez had made Florent Malouda a top target as he looked to reinforce Liverpool’s options in the final third, with the Reds interested in a deal to sign the winger in 2007.

Malouda had impressed during his final season at Lyon, but turned down the approach from Liverpool despite Benitez’s best attempts to persuade him to Anfield.

“Whenever I was training, I would always ask him questions about the Premier League and whether or not I play there. He said you have to go and experience the Premier League at least once in your career and then he grabbed his phone and called Liverpool – he literally made the deal for me.

“Liverpool were the first team to make an offer. Rafa was the coach and he really pushed for me to go to Liverpool.”

Give Florent Malouda that much space at your own peril 💥#GoalOfTheDay | @ChelseaFC pic.twitter.com/5FYppqVUeT

The Frenchman instead signed for Chelsea, where he reunited with former Guingamp teammate Didier Drogba in the Premier League. The duo had formed a fine understanding in France and impressed in tandem at Chelsea, as the west Londoners won a domestic double in 2009/10 and the 2012 Champions League.

“When Chelsea came in for me, I felt so much pride,” he said.

“I knew a lot of the players that were already there, and of course we would speak regularly on the phone, which helped my decision, so I knew Chelsea were the club that I really wanted to join.

“I wanted to be part of the squad. Didier Drogba moved, then Michael Essien, two guys I played with in France, so it was like I already knew everything about Chelsea. Makelele was there, [William] Gallas played there. One year before I signed, I used to come to Chelsea to watch my friends and I was already connected to the team.

“I knew I wanted to play for Chelsea.”

Tottenham Hotspur were confident of announcing Willian as their record signing in the summer of 2013, after the winger underwent a medical in north London ahead of the move.

Willian had been identified as a replacement for Gareth Bale, as the Wales international closed in on his world-record move to Real Madrid. All appeared to be going well, until Chelsea caught wind of the deal and stole in to snatch the Brazilian from their cross-town rivals.

The Blues agreed a £30m deal with Russian side Anzhi Makhachkala and interest from Stamford Bridge saw Willian make a u-turn on his decision to sign for Spurs.

“My objective was to go to Chelsea, but since Chelsea don’t want me, then we’re going to sign for Tottenham,” Willian recalled on the events to Brazilian TV show Resenha.

“Then we’re going in the van to the training centre. Kia, my agent, is already down there, waiting. I thought it was weird, he was already at the door. Then I got out of the van, he said, ‘we have problems’. I said ‘oh, what happened?’ Then he ‘Chelsea made an offer’. I said, ‘So make do, I’ll get back in the van, you’ll make do and I’ll go to Chelsea, I will not sign with Tottenham.

“I stayed there for eight hours in the training centre. Tottenham’s director said ‘I’m going to report you to FIFA, fans here in England will boo you’. They made up a lot of things. I got stuck there for eight hours and then I left and went straight to meet Chelsea, sort the details and sign.”

Liverpool looked set to sign Mohamed Salah during the 2014 January transfer window, following weeks of negotiations with Basel for the Egyptian winger.

Salah was keen on the move to Liverpool, but revealed a phone call with Jose Mourinho persuaded him to ignore the Reds’ advances and sign for Chelsea in an £11m deal.

“I was waiting for Liverpool because I really like Liverpool. I was eager to join them,” he said, as per the Liverpool Echo.

“But then I received a phone call from Mourinho and that changed everything. He explained the situation to me and told me that he needed me at Chelsea. That was one of the main reasons why I joined Chelsea.”

Salah’s career with Chelsea failed to work out as hoped, as he struggled to make an impact and was afforded just 13 league appearances across 18 months at the club. Liverpool’s interest remained however, and the Merseysiders were successful at the second attempt.

Salah signed for Liverpool from Roma ahead of the 2017/18 campaign, after a period of progression in Italy. He’s won the Premier League and Champions League among his honours at Anfield, alongside a host of individual accolades that include two PFA Player of the Year awards and three Premier League Golden Boots. Only six players have ever scored more goals for Liverpool.

Mykhaylo Mudryk is the latest deal that Chelsea have ambushed from a Premier League rival, having made a late move to hijack Arsenal’s deal for the Ukrainian.

Mudryk had appeared set on a move to Arsenal and had gone public in his desire for the transfer, having posted himself watching the Gunners’ games on social media in recent weeks. He appeared the perfect addition for the table-topping north Londoners, with Mudryk the right profile of player to fit in with their improving young team.

Arsenal made three bids for the 22-year-old, but Chelsea’s superior offer allowed the Blues to snatch Mudryk from under the noses of their London rivals.

⚽️ All goals by Mykhailo Mudryk for #Shakhtar ⚒

🔥 Which one do you remember the most?

The Ukraine international has signed long-term contract at Chelsea, who have agreed to pay Shakhtar Donetsk an initial £62million – possibly rising to £88m.

“This is a huge club, in a fantastic league and it is a very attractive project for me at this stage of my career. I’m excited to meet my new team-mates and I’m looking forward to working and learning under Graham Potter and his staff.”