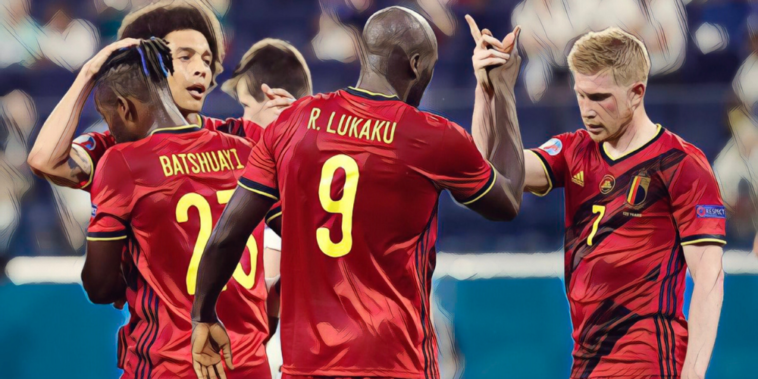 We’re through to the last eight of Euro 2020 with some of the tournament favourites having already crashed out of the competition, the quarter-final line-up including surprise packages in Switzerland, Ukraine and the Czech Republic.

Belgium will be amongst the front runners for the trophy with the world’s number-one ranked nation through, though Roberto Martinez’s side face a stern examination of their credentials against an impressive Italy team.

Elsewhere England will take confidence from beating Germany, whilst Spain edged Croatia in the previous round as La Roja seek a third European Championship in just four tournaments.

Ahead of the last-eight ties, we’ve picked our combined side from the quarter-finalist’s squads.

Belgium will be confident of reaching the latter stages as the nation’s Golden Generation looks to end their wait for a major trophy, the Red Devils boasting a collection of world-class talents including goalkeeper Thibaut Courtois.

Courtois has been one of the best goalkeepers in world football for several seasons, ranking arguably as La Liga’s finest since swapping Chelsea for Real Madrid.

The 29-year-old impressed as Belgium beat Portugal in the last-16, his commanding presence spreading confidence to the backline.

Kyle Walker features at right-back in our combined side, despite being named as one of England’s three centre-back options for the round of 16 win over Germany.

Walker’s explosive pace provides England with brilliant recovery speed in the backline, though his game has evolved in four seasons at Manchester City with the defender comfortable stepping into midfield.

Walker’s tactical intelligence and versatility could yet prove crucial to England in the later rounds, with the defender equaly adept at stretching the pitch in a wide role or tucking inside to create overloads.

Leonardo Bonucci is set to captain Italy in the absence of Georgio Chiellini this week, with the veteran centre-back remaining a crucial part of Roberto Mancini’s talented side.

Italy have won plenty of plaudits and are currently on a national record of 31 games unbeaten, with the 34-year-old centre-back providing assurance behind a midfield that exerts control.

With names such as Ruben Dias, Raphael Varane and Milan Skriniar having all already exited, we’ve opted for the experience of Bonucci over England’s Harry Maguire at centre-back.

Aymeric Laporte has been handed his opportunity on the international stage this summer, having changed his allegiance to Spain after being continually overlooked by France.

Laporte has become a mainstay of the La Roja side and their gain has proven to be France’s loss, with the 27-year-old excellent defensively and even better when stepping forward in possession.

Laporte is understood to have been left disappointed by a reduced role at Manchester City last season and it is easy to see why, the centre-back amongst the best defenders in the Premier League when at his very best.

One of the stand-out performers in the Italy team so far this summer, Spinazzola’s marauding runs forward have offered an attacking dynamic to Roberto Mancini’s impressive team.

The right-footed left-back has charged forward at will and linked impressively with Lorenzo Insigne, with both players able to go inside or outside to leave opposition defenders second guessing.

A key cog in a well-oiled machine, the 28-year-old has been one of Italy’s most threatening performers throughout Euro 2020 to date.

Marco Verratti made an instant return to the national side following his recovery from injury, an indication of the esteem in which the Paris Saint-Germain midfielder is held at international level.

Italy’s midfield had shone in wins over Turkey and Switzerland, but Verratti’s technique and composure is difficult to match despite a wealth of midfield options.

The 28-year-old is one of the best deep-lying midfielders in Europe with his ability to find space, receive and pass through opposition lines, Verratti set to be a key performer if Italy have genuine aspirations of winning Euro 2020.

The best player remaining in the competition and perhaps Europe’s finest footballer right now, Kevin De Bruyne was a shoo-in for this team given his performances in recent seasons.

De Bruyne’s impact for Belgium was underlined during the group stage win over Denmark, the Manchester City midfielder coming off the bench to turn defeat into victory for the Red Devils.

Raheem Sterling’s place in the England side was being questioned pre-tournament, but four games and three goals later the winger is being lauded as his nation’s key threat.

Sterling’s off-the-ball-movement and goalscoring prowess have been essential to England’s progression, with his return to form a welcome boost as Gareth Southgate calls upon one of the most productive wide players in European football.

It’s now 15 goals and 10 assists in his past 20 appearances for England, with the 26-year-old in confident mood ahead of a quarter-final tie with Ukraine in Rome.

We’ve tried our best to avoid jumping on the Jack Grealish bandwagon, his performances having left England fans clamouring for his inclusion in the starting side.

It’s difficult to ignore his contribution when called upon however, including a game-changing cameo as England beat Germany 2-0 in a statement result in the last 16.

Eden Hazard has the pedigree to warrant inclusion and Lorenzo Insigne presents danger for Italy, but it’s difficult to ignore the match-winning ability of Grealish – even if Southgate often ignores the outside noise.

Romelu Lukaku remains in pursuit of the tournament’s Golden Boot after scoring three goals at Euro 2020 so far, the Belgium number nine a centre-forward operating at the very peak of his powers at present.

Lukaku enjoyed a career-best season in 2020/21 to fire Inter Milan to a first league title in more than a decade, continuing that form into this summer’s tournament to fire Belgium into the quarter-finals.

It’s now a staggering 63 goals in 97 caps for a player who only recently turned 28, Lukaku having moved past the likes of Ronaldo Nazario and Zlatan Ibrahimovic for international goals at this summer’s finals.

Euro 2020 has not been Harry Kane’s tournament so far, but a clincher in the win over Germany could reignite the fortunes of the England captain in the latter stages.

It’s a testament to Gareth Southgate and his side that they have reached this stage despite Kane struggling for form, the Tottenham star his nation’s most important and influential footballer.

Kane enjoyed an excellent individual season to win the Premier League’s Golden Boot and Playmaker Award last term, the third time he has finished as the division’s leading scorer.

Manchester City have been linked with a summer move and Premier League opponents will be dreading the prospect of Kane receiving the service often provided at the Etihad.