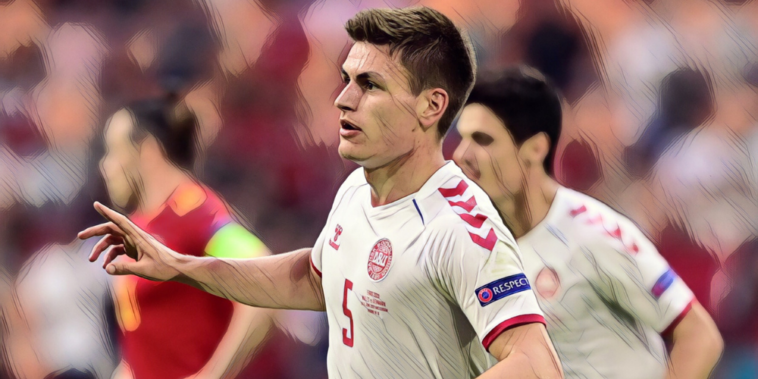 Full-backs and wing-backs have arguably never been more important or influential, with Euro 2020 having been another demonstration of the value that can be brought from having high quality on the flanks.

Whether it’s nullifying the threat of opposition wingers or flying forward to impact the game in attack, the complete skillset of some fine modern defenders have been on show at this summer’s tournament.

Here are five wing-backs who have shone at Euro 2020.

Italy have established themselves as the Team of the Tournament at Euro 2020 to date, with Roberto Mancini’s side proving a breath of fresh air during their run to the quarter-finals.

Mancini’s side are now unbeaten across a national record 31 games in all competitions and have won admirers for their adventurous and high-octane style of football, mixing stereotypical Italian solidity with a smoothness in attacking transitions.

One player who has proven both emblematic of their style and crucial to the system is left-back Leonardo Spinazzola, who has been more a nominal full-back given his licence to push high and wide.

Spinazzola has flown forward with regularity throughout the tournament to date and has twice been named as the best player afield in three appearances at Euro 2020, including following Italy’s extra-time win over Austria in the last 16.

The 28-year-old has worked in brilliant tandem with Lorenzo Insigne down the Italian left flank, where both players – naturally right-footed – are comfortable driving inside or outside to present headaches for opposition defences.

Spinazzola has taken an unconventional route to the top after failing to make the grade at Juventus, but the now Roma left-back is flourishing in the Euro’s most exciting team so far and will hope to be at his menacing best once more when the Azzurri face Belgium in a huge quarter-final clash.

Does this guy ever stop running?

Seriously, Maehle’s lung-busting performances have been a major factor in Denmark’s progression to the last eight, with the Danes bouncing back from defeat in their opening two fixtures – and the traumatic scenes of Christian Eriksen’s collapse – to reach the quarter-finals in impressive fashion.

Maehle’s indefatigable showings have won plenty of admirers with the Atalanta wing-back having shone on both flanks, demonstrating his speed of foot and comfortability in possession with the 24-year-old willing to run at opponents.

Maehle has made a huge 28 progressive runs in possession at Euro 2020 so far, almost double the haul of the second-placed player in the rankings, Croatia’s Mateo Kovacic (16).

He leads the tournament for progressive carrying distance and carries into the final third, with Atalanta having seemingly signed a bargain following their €10m capture of the flying full-back from Genk last December.

Maehle recorded more shots on target than any other Denmark player during the group stages despite his ‘defensive’ position, whilst goals against Russia and Wales have helped build huge momentum behind a Danish side being willed on by almost every neutral.

Maehle’s club teammate Gosens is another to have shown the influence he can have at the highest level this summer, the 26-year-old enjoying a superb tournament for Germany thus far.

Gosens is the only member of the Germany squad never to have played in the Bundesliga, though his unorthodox route to prominence has not prevented the star shining at Euro 2020.

Gosens was arguably Germany’s best player in defeat to France in their opening fixture, before producing one of the tournament’s best individual performances as Die Mannschaft thrashed Portugal 4-2 in their second game.

The left wing-back was electric through and gave Nelson Semedo a truly torrid time, bursting forward relentlessly and showing a quality in possession to change the course of the contest.

It was Gosens’ cross-shot that led to Germany’s equalising goal, before he later turned provider for Kai Havertz with another teasing cross to put Joachim Low’s side in control.

He completed a superb showing by powering home a header for his second international goal, with the forward thrust that has helped Atalanta become Serie A over-achievers now being shown on the international stage.

The Netherlands’ exit at the last-16 to the Czech Republic was a disappointment for many fans, the latter stages of the tournament set to be without the famed orange colours, Frenkie de Jong’s fleet-footed brilliance and the one-man wrecking ball that has been Denzel Dumfries.

Dumfries is a player whose reputation has been enhanced ten-fold following his exhilarating showings for the Dutch, his pace, power and frightening energy having made the PSV wing-back one of the stars of the tournament.

Dumfries has played without fear and the assurance provided by the Netherlands’ three central defenders has freed the 25-year-old to bomb forward at his rampaging best, scoring his first two international goals with a late winner against Ukraine and clincher against Austria.

Premier League clubs are already being linked with Everton amongst the front runners for his signing, though Bayern Munich have been credited as a potential suitors for a player who reportedly has a release clause of just €15m.

Given his performances at Euro 2020, it won’t be long before that figure is activated.

Switzerland produced the shock of the tournament so far after eliminating world champions and favourites France in the last 16 on Monday, a thrilling tie ending in a penalty shoot-out that saw Kylian Mbappe miss the decisive kick for Les Bleus.

The Swiss are more than deserving of their place in the last eight with their well-drilled side having shown both spirit and quality during the tournament so far, with wing-back Zuber having played a prominent role in their success.

The Eintracht Frankfurt star has provided four assists at Euro 2020, a figure no player has ever bettered at a single finals since the data was first collected in 1980 – equalling Ljubinko Drulovic (2000), Eden Hazard (2012) and Aaron Ramsey (2016).

Zuber has assisted four of Switzerland’s seven goals at Euro 2020, including Haris Seferović’s opener against France, whilst he also won a penalty against Les Bleus that was spurned by Ricardo Rodriguez.

Wing-backs have been crucial to the systems and success of several sides at Euro 2020 so far, with Zuber’s incredible productivity having helped Switzerland progress from a major tournament knockout fixture for the first time since 1938.