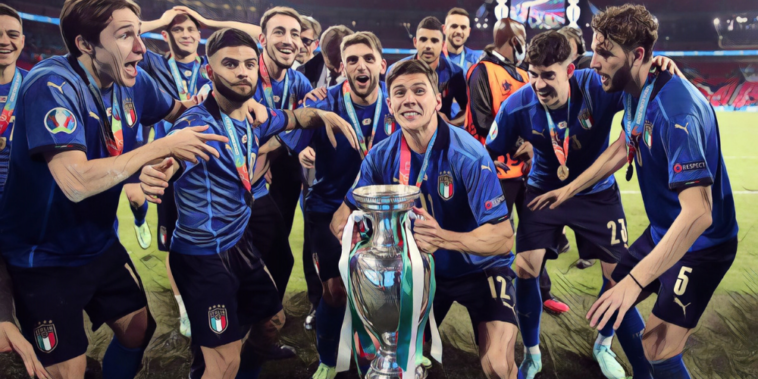 Euro 2020 is done and dusted, with Italy breaking English hearts in the final and extending the Three Lions’ long wait for major tournament success.

Gareth Southgate’s side had overcome decades of disappointment to reach a first final since 1966 in impressive fashion, but the challenge of an outstanding Azzurri outfit – now unbeaten in 34 games – proved one step too far as Italy were crowned champions of Europe following shoot-out success.

After its initial postponement last year, Euro 2020 proved a refreshing return to major international action, with some of the defining images of the tournament including Cristiano Ronaldo writing yet more records and Denmark reaching the semi-finals on a wave of good-will and emotion following the traumatic scenes of Christian Eriksen’s collapse in their opening fixture.

Following the conclusion of the tournament, we’ve revisited the best of the action to hand out our own Euro 2020 awards.

Gianluigi Donnarumma scooped the official prize for Euro 2020’s Player of the Tournament, the goalkeeper having been excellent during Italy’s march towards the trophy.

Whilst the soon-to-be Paris Saint-Germain shot-stopper is a well worthy contender for this accolade, we’ve instead chosen Azzurri teammate Jorginho for his role as the deep-lying fulcrum of Roberto Mancini’s side.

No player covered more distance than the Chelsea midfielder throughout the finals, whilst his 25 interceptions set a new European Championship record since the date was first collected in 1980.

Jorginho’s quality in possession allowed Italy to assert a level of control on their opponents, the midfielder stationed at the base of the midfield with his presence allowing his side’s full-backs to fly forward and join the attack.

Alongside a brilliant midfield contingent including Marco Verratti, Nicolo Barella and Manuel Locatelli, Jorginho thrived in Italy’s cohesive system to become only the tenth player to win the Champions League and a major international tournament in the same year.

Young Player of the Tournament

Euro 2020 saw several starlets enjoy tournaments to remember with Bukayo Saka and Mikkel Damsgaard deserving of mention, though it’s Pedri who is named as our Young Player of the Tournament.

The Spain midfielder was not widely expected to play a prominent role in the side, but missed just one minute of La Roja’s run to the semi-finals.

Selected ahead of more established names including Liverpool’s Thiago Alcantara, the teenager shone to lead Euro 2020 for through balls, passes into the final third and goal-creating actions.

Young Player of the Tournament 🥇

Pedri was mesmerising at times for the Spanish with the 18-year-old outshining far senior teammates, his ability to receive the ball in congested areas and maintain possession having seen the Barcelona teenager likened to club great Andres Iniesta.

Based on his current trajectory following a meteoric rise, the sky is the limit for Pedri who announced himself as one of the world’s most promising talents at Euro 2020.

From Marco van Basten’s outrageous volley to Paul Gascoigne’s iconic individual effort at Euro ’96, the European Championship has not been short of glorious goals in past tournaments.

Patrik Schick joined that illustrious company with the best goal of Euro 2020, scoring from an absurdly far distance during the Czech Republic’s 2-0 win over Scotland during the group stages.

Schick scored five goals to finish as the joint-leading scorer at the finals, but none better than this piece of astonishing audacity to catch out David Marshall from just past the half-way line.

Game of the Tournament

Euro 2020 featured some thrilling fixtures including the Netherlands’ 3-2 win over Ukraine and some fascinating match-ups between eventual champions Italy and fellow contenders Belgium and Spain, but the best viewing was found on a bonkers day in late June.

The day’s two last-16 fixtures featured a staggering 14 goals as Spain and Switzerland progressed to the quarter-finals, with the latter’s 3-3 draw with world champions France edging out the former’s 5-3 extra time win over Croatia as our game of the tournament.

Six goals, late drama, a penalty shoot-out lottery and one almighty upset, it was a clash that featured everything as the Swiss dumped out the tournament favourites and World Cup winners.

Switzerland took a shock lead through Haris Seferovic’s header before spurning the chance to double their advantage from the penalty spot, an opportunity that looked costly as France roared back to lead 3-1 with just nine minutes remaining.

Kylian Mbappe was the only player to miss after seeing his effort saved by Yann Sommer, whose shoot-out heroics caused a seismic shock and early elimination for Les Bleus.

The scenes witnessed following Christian Eriksen’s traumatic collapse during Denmark’s group stage fixture with Finland were amongst the most distressing imaginable, whilst the coverage was rightly criticised during a frightening moment for the watching world.

Huge credit must go to the medical staff involved and Eriksen’s Denmark teammates – most notably Simon Kjaer – for their life-saving actions, with our Moment of the Tournament the pleasing images released of the 28-year-old recovering in hospital.

Another step in the right direction as Christian Eriksen is discharged from hospital following a successful operation. pic.twitter.com/c5L4KJiYzu

After what had looked like a potentially devastating incident, the pictures later released of Eriksen smiling in his hospital bed and subsequent news of his discharge were the most heart-warming moment of Euro 2020.

Everyone wishes the Denmark midfielder all the best on his road to recovery.

Manager of the Tournament

Roberto Mancini takes the crown as our Manager of the Tournament, the 56-year-old’s incredible revitalisation of Italy nothing short of remarkable.

In the space of three years the former Manchester City coach has transformed the Azzurri, taking the reins following their failure to qualify for the 2018 World Cup and leading the national side to a record-breaking unbeaten run – the 34th game of which saw Italy crowned as Euro 2020 winners.

The newly-crowned European champions are now just one game short of levelling the all-time international record, with Mancini having constructed a side that combines archetypal Italian solidity with a free-flowing and expansive attacking unit.

Gareth Southgate deserves an honourable mention, the England boss having ignored outside noise regarding the selections of names including Raheem Sterling and Jack Grealish to guide the Three Lions into a first major final in 55 years.

Southgate has done so in his own flexible manner, whilst Denmark’s Kasper Hjulmand should also receive credit for his handling of the aforementioned events involving Christian Eriksen, before bouncing back from consecutive group stage losses to reach the semi-finals.

Read – Picking our Euro 2020 Team of the Tournament