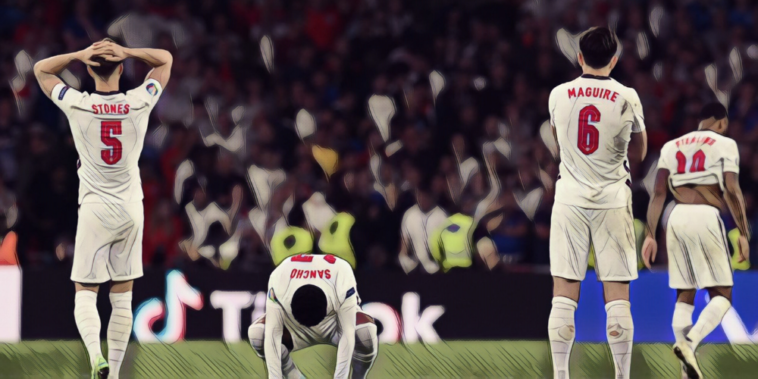 Penalties have proven a curse for more than one England side throughout recent decades, with the Three Lions’ hopes of winning a first major tournament since 1966 once again ended via a shoot-out at Euro 2020.

Gareth Southgate’s side became the first England team in 55 years to reach a major final this summer, though saw their dreams of making history ended after a 3-2 shoot-out defeat to Italy at Wembley.

The loss continues a woeful record from the spot for England in major tournaments and following their latest defeat we’ve decided to look back at the nation’s past penalty disappointments.

Bobby Robson’s side became the first England team since the 1966 World Cup winners to reach the last four of the tournament at Italia ’90, squeezing through a competitive group stage before defeating Belgium and surprise package Cameroon in the knockout stages.

The semi-finals saw the Three Lions face old rivals West Germany, a fixture remembered for Paul Gascoigne’s tears in Turin and the start of an agonising modern history in penalty shoot-outs.

The clash finished 1-1 after extra time with Gary Lineker cancelling out Andreas Brehme’s opener 10 minutes from the end of normal time, with Lineker scoring England’s first from the spot in the shoot-out before Peter Beardsley and David Platt made it three from three.

Stuart Pearce’s low effort was saved by Bodo Illgner to hand the Germans the advantage, before Chris Waddle blazed his spot-kick high over the bar to condemn England to semi-final heartache.

Six years later and England progressed through Euro ’96 amid the backing of a feverish home support, as ‘Football’s Coming Home’ echoed around stadiums in support of the host nation.

Terry Venables’ side faced Spain in the last eight and the two sides were unable to be separated across 120 goalless minutes, with the Three Lions’ chances once again dependent on their success from the spot.

David Seaman’s save from Miguel Ángel Nadal saw England through to the last four, securing the Three Lions’ first ever shoot-out success.

Gareth Southgate will have sympathised with his players following their Euro 2020 loss, the now England manager having himself been the man to cost his side dearly with a penalty miss at Euro ’96.

England faced rivals Germany once again in the latter stages of the tournament and got off to a dream start as Alan Shearer netted after just three minutes, though Stefan Kuntz’s equaliser soon after levelled the scores.

Unable to be separated despite missed chances for both sides, the following shoot-out saw both teams compile perfect records over their opening five spot-kicks.

The clash with Argentina had begun in thrilling fashion as the two sides exchanged four goals in the opening 45 minutes, an 18-year-old Michael Owen announcing himself to world football with a sensational individual goal for England.

Despite Beckham’s red card just two minutes into the second half, England hung on throughout the remaining period and extra-time, with the tie decided via a penalty shoot-out once more.

Paul Ince and David Batty saw their efforts save by Argentina goalkeeper Carlos Roa, the South Americans progressing to the quarter-finals despite Hernan Crespo’s miss from the spot.

Euro 2004 was perhaps the tournament that most felt like a missed opportunity for an England side dubbed the ‘Golden Generation’, a talented team seeing their hopes ended by host nation Portugal on penalties.

England had taken an early lead through Michael Owen in the clash, but the early substitution of teenage sensation Wayne Rooney through injury proved a hammer blow to the Three Lions’ chances.

Rui Costa’s equaliser forced extra-time and the two sides exchanged goals from Helder Postiga and Frank Lampard in the added period, before heading to the lottery of the shoot-out.

David Beckham blazed England’s first kick high over the bar after slipping upon contact, whilst Rui Costa was also left cursing the spot after sending his own penalty up and over the crossbar.

Portugal goalkeeper Ricardo bizarrely removed his gloves before saving from substitute Darius Vassell, before stepping up himself to slam home the decisive kick in sudden death and send the Portuguese through.

Rivalries were resumed two years later as England met Portugal in the last eight of successive major tournaments, the two teams facing off in the quarter-finals of the 2006 World Cup.

England saw Wayne Rooney sent off for a stamp on Ricardo Carvalho in the second half, though held out through 120 goalless minutes to reach yet another penalty shoot-out.

It proved a shoot-out that neither side appeared to want to win as both teams missed two of their opening three kicks, Frank Lampard and Steven Gerrard seeing tame efforts saved by Euro 2004 nemesis Ricardo.

Helder Postiga’s converted kick put the Portuguese in control, before substitute Jamie Carragher’s saved effort afforded Cristiano Ronaldo the chance to send his side through.

It was an opportunity Ronaldo was never likely to squander.

The shoot-out seemed to be heading the Three Lions’ way after Steven Gerrard and Wayne Rooney got England off to a perfect start, with Ricardo Montolivo dragging Italy’s second spot-kick wide of the post.

Andrea Pirlo’s sublime Panenka brought the scores level at 2-2 and it was even once again as Ashley Young smashed England’s third penalty against the crossbar.

Antonio Nocerino then cooly converted his kick to hand Italy the advantage for the first time, before Ashley Cole’s tame effort presented former West Ham player Alessandro Diamanti the chance to score the decisive penalty for the Azzurri.

England won a World Cup penalty shoot-out for the very first time as part of a run to the semi-finals of the 2018 tournament in Russia, edging past Colombia in a nervy last-16 tie packed full of drama.

The game had finished 1-1 as Yerry Mina’s 93rd-minute leveller for Colombia forced extra-time, with the clash heading to a shoot-out at the Spartak Stadium in Moscow.

It looked set to be another night of agony from the spot for England as Jordan Henderson was the first to miss, but Mateus Uribe’s effort against the bar and Jordan Pickford’s save from Carlos Bacca handed Gareth Southgate’s side the chance to progress.

Eric Dier stepped up to calmly convert for England, sealing a first penalty shoot-out win in over two decades.

The UEFA Nations League may have not quite captured the imagination of the genuine major tournaments to date, but the first edition at least provided England with another shoot-out success.

Gareth Southgate’s side reached the maiden finals of the competition before losing to the Netherlands in the semi-finals, and then beating Switzerland on penalties in the third-place play-off following a frustrating goalless draw in which England hit the woodwork on four occasions.

Jordan Pickford was the hero for the Three Lions, scoring one and saving another in the shoot-out as England triumphed 6-5 on penalty kicks.

Luke Shaw’s second-minute goal had handed the Three Lions a dream start at the national stadium, but Italian pressure began to tell as Leonardo Bonucci scrambled home a second-half equaliser for the Azzurri.

Penalties proved the decider in the showpiece and it was advantage England after Harry Kane and Harry Maguire converted, with Jordan Pickford’s save from Andrea Belotti sparking huge excitement amongst the home crowd.

England, however, missed each of their next three kicks as substitutes Marcus Rashford and Jadon Sancho – introduced late into extra-time – spurned their spot-kicks, before teenager Bukayo Saka missed the decisive penalty as Gianluigi Donnarumma saved to crown Italy Euro 2020 winners.