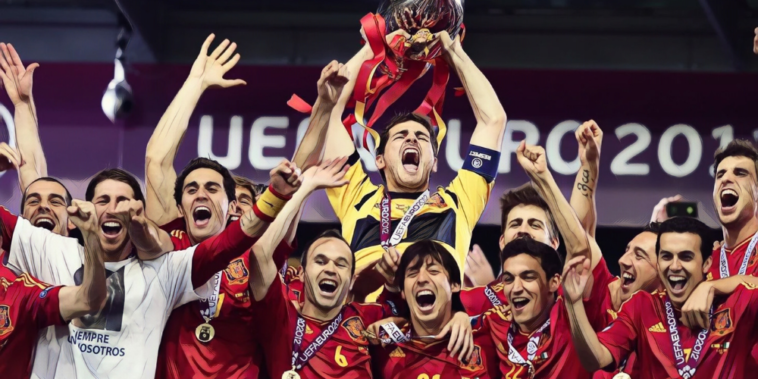 Major tournament finals are often cagey and tense affairs, with both sides fearing a potentially costly mistake, yet the European Championships has delivered some real epics over the years.

As England prepare to take on Italy in Sunday’s showpiece at Wembley, neutrals will be hoping for a repeat of some of history’s best finals, which have seen players and teams write themselves into football folklore.

Whether it be from a particularly stunning all-round team display or from a moment of sheer brilliance from an individual hero, Euro’s finals of the past have undoubtedly delivered some key iconic moments.

Let’s take a look at the five most memorable European Championship finals ever.

The last tournament to feature just four teams, Euro 1976 wasn’t exactly the festival of football that it is now, with each side only playing two games, although that’s not to take away from what was a breathtaking final nonetheless.

Such has been the constantly evolving nature of Europe post-World War II, three of the tournament’s four participants actually no longer exist, with Czechoslovakia, Yugoslavia and West Germany all taking different forms in the present day.

That history lesson aside, the final itself saw Czechoslovakia – who’d beaten the Netherlands – take on West Germany, who’d edged past hosts Yugoslavia after extra-time, Dieter Muller netting a hat-trick.

Muller and co were then shellshocked in the showpiece, conceding twice in the opening 25 minutes, before the German striker pulled one back on 28 minutes.

As the game neared its climax, up stepped Bernd Holzenbein to draw West Germany level with just a minute to go, the game eventually reaching penalties after a goalless extra-time – the first European Championship’s to introduce the dreaded shootout.

43 years ago today the ‘Panenka’ was born.

The final of Euro ‘76 between Czechoslovakia and West Germany had gone to penalties after a 2-2 draw.

Uli Hoeneß blazed over for Germany. Antonin Panenka stepped up and dinked it down the middle to win it. pic.twitter.com/qBmk3cSpv5

Not just the competitions first shootout, it remains arguably one of the most iconic, Antonin Panenka writing himself into the annals of football history with his now heavily replicated, exquisite dinked spot-kick, the 28-year-old sparking Czech delight after capitalising on Uli Hoeness’ earlier miss.

The eighth edition of the quadrennial tournament, Euro 1988 delivered perhaps the competition’s most memorable moment, as a truly gifted Netherlands side powered past the Soviet Union in the final.

The two nations had been drawn in the same group, yet finished above both Ireland and England to progress to the knockout stages, where Holland would edge past West Germany, while the Soviets powered past Italy.

Into the final in Munich, Oranje were the heavy favourites due to the plethora of star talent at their disposal, the defence built on the solidity of Ronald Koeman and Frank Rijkaard, while leading the line was a heavyweight forward partnership of Ruud Gullit and Marco Van Basten.

The latter man had dismantled England with a stellar hat-trick in the group stage and netted a late winner in the last four, yet would produce his finest moment in the final.

Gullit’s header had given Rinus Michels’ side the lead, before Van Basten’s piece of magic made it 2-0 just after the break, the prolific striker netting a superb dipping volley from the angle, the goal arguably one of the finest pieces of genius of all-time, let alone just in the European Championships.

"I was thinking, OK, I can stop it and do things with all these defensive players or I could do it the more easy way, take a risk and shoot."

Marco van Basten on his outrageous volley in the Euro 88 final.

A pivotal penalty save from Hans van Breukelen kept Holland two ahead, as they went on to secure a first, and only, major tournament triumph.

While the Netherlands were strong favourites in ’88, the same can’t be said of 1992 winners Denmark, who were nobody’s pick to succeed having only gained a place in the tournament due to the disqualification of Yugoslavia.

The last tournament to only have eight participants, it was also the first to feature a newly reunified Germany, the eventual finalists finishing as group runners up before overcoming hosts Sweden in a thrilling semi-final encounter.

As for the unfancied Danes, they had upset the odds to pip both France and England to a place in the knockout phase, where they edged holders Holland on penalties, the 1988 final hero Van Basten missing what proved to be the decisive penalty.

Heavy underdogs in the final, the Scandinavian side had just a handful of well-known faces in their ranks – notably Manchester United’s Peter Schmeichel – up against an impressive German side which included many of the names who had won the World Cup for West Germany two years earlier.

Nevertheless, the night belonged to Denmark, a stunner from John Jensen and a late Kim Vilfort strike carrying the Danes to a maiden tournament triumph.

One pivotal tactic throughout their victory had been to pass the ball to ‘keeper Schmeichel as a time-wasting tool, with the introduction of the pass-back rule coming straight after the tournament’s conclusion.

Denmark have since been pipped by Greece for the tag of the Euro’s greatest ever underdog story, following their Hollywood-esque rise to victory in 2004.

Competing in just their third-ever major tournament, the Greek’s overcame a difficult group stage draw to progress to the knockout stages, where they would beat both France and Denmark with 1-0 victories.

That latter triumph set up a final showdown with hosts Portugal, who had lost to the minnows in the opening game, yet had looked strong from then on, notably beating England and Netherlands in the knockout rounds, with a young Cristiano Ronaldo coming to the fore.

⏪ #OTD in 2004, Greece were crowned European champions after Angelos Charisteas scored the only goal vs Portugal 👏

Backed by home support, it seemed as if there could be no other outcome than that of a Portuguese victory, particularly with the likes of Ronaldo, Deco, Rui Costa and Luis Figo in tow against a team of relative unknowns.

As they had done all tournament, however, Greece showcased a real defensive resilience to thwart their much-fancied opponents, before Angelos Charisteas ensured his god-like status by putting his side ahead on 57 minutes, with one of just four shots on goal for the visitors.

Despite the inevitable Portuguese onslaught, their opponents held firm, going on to register their third successive shutout of the tournament and claim a seemingly unthinkable maiden tournament triumph.

From the underdogs above to a side almost guaranteed to win, Spain completed a hat-trick of major tournament wins at Euro 2012, having won both the 2010 World Cup and the 2008 Euro’s in the four years prior.

La Roja’s ascension to the top of world football had coincided with the rise of Barcelona under Pep Guardiola, with a large chunk of the Spanish squad in the latter two tournaments, in particular, made up of the Nou Camp’s star names.

In 2012, Vicente del Bosque’s side was perhaps coming to the end of a stellar cycle, yet that seemingly didn’t curtail their progress, as they beat both France and Portugal en route to securing a place in the showpiece.

As for Italy – who’d drawn with the world champions in the opening game – they overcame England on penalties in the quarter-final’s, before a Mario Balotelli brace fired them past Germany.

In the final itself, Spain produced one of the finest displays in a major tournament final ever, racing into the lead through a rare David Silva header, before Jordi Alba’s burst from the back added a second before the interval.

Like a predator toying with its prey, del Bosque’s men kept comfortable control of possession for much of the second half, before providing the killer blow with two late goals from Fernando Torres and Juan Mata.