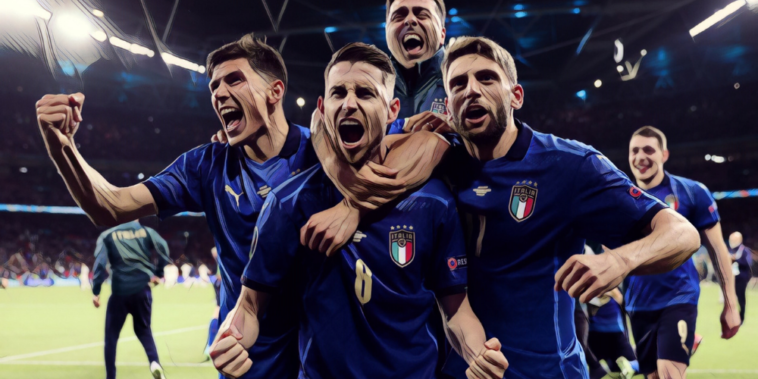 Italy are champions of Europe for a second time after emerging triumphant at Euro 2020, the tournament reaching its conclusion as the Azzurri defeated England on penalties at Wembley.

Roberto Mancini’s side were fitting winners as their record-breaking unbeaten run continued throughout the finals, edging an England side who overcame the weight of past disappointments to reach a first major final in 55 years.

Elsewhere Denmark became the first team to lose their opening two fixtures and still progress to the knockout stages, bouncing back from the traumatic scenes of Christian Eriksen’s collapse to reach the semi-finals on a wave of momentum and emotion.

Following the Euro 2020 final we’ve compiled our best XI from the past four weeks of action, here is The Football Faithful’s Team of the Tournament.

Italy’s giant goalkeeper played a pivotal part in his nation’s coronation as champions, keeping three consecutive clean sheets during the group stages before producing some inspired performances in the knockout rounds.

The 22-year-old performed despite the distraction of an impending move to Paris Saint-Germain and excelled in the quarter-final win over Belgium, before producing crucial penalty saves as both Spain and England were beaten.

Donnarumma beat away spot-kicks from Jadon Sancho and Bukayo Saka as Italy won the final in a shoot-out, his decisive contributions seeing the Italian edge out Jordan Pickford and Yann Sommer for a place in our XI.

UEFA's team of Technical Observers have named Italy goalkeeper Gianluigi Donnarumma as their Player of the Tournament 🇮🇹👏#EURO2020 | #ITA pic.twitter.com/HWGnaHLGkK

Italy’s future is quite literally in safe hands with Donnarumma, who is the first goalkeeper to win a European Championship Player of the Tournament award and could yet become the best goalkeeper of his generation.

The Netherlands disappointingly crashed out in the first knockout round despite a flawless group stage campaign, though their early elimination did not prevent Denzel Dumfries from becoming one of the early stars of the tournament.

Dumfries performed like a man possessed during the Oranje’s group stage fixtures, his marauding displays from right-back one of the defining images of the Dutch side.

The 25-year-old headed home a late winner during a 3-2 thriller with Ukraine, before scoring once more as Austria were beaten to seal his side’s progress to the last 16.

Lightening quick, powerful and possessing endless energy down the right-hand side, it is little surprise to see Premier League sides interested with Everton strongly linked as the Toffees seek a long-term replacement for Seamus Coleman.

Harry Maguire was included in England’s squad for the tournament despite being an injury doubt, the centre-back missing the Three Lions opening two fixtures before returning to the side.

Gareth Southgate’s side was vindicated as Maguire further shored up a defence already impressing, producing a series of commanding displays with his aerial dominance proving crucial in both boxes.

Maguire was excellent during wins over Germany and Denmark in the knockout stages, whilst he scored the second as Ukraine were thrashed in the quarter-finals during England’s run to the showpiece.

Often unfairly criticised given the price-tag that came with a move to Manchester United in 2019, Maguire showed at Euro 2020 that he is an irreplaceable figure for both club and country.

If Euro 2020 was the last we see of Georgio Chiellini in an Italy shirt, it was certainly a fitting way for the veteran captain to bow out.

Chiellini has been a nightmarish prospect for opposition forwards for more than a decade and at 36 remains one of the most street-wise defenders around, his smiling persona proving merely a mirage as he wrestled back possession for the eventual champions.

The centre-back retired from international duty following Italy’s failure to qualify for the 2018 World Cup and the Azzurri will be grateful he reversed that decision following a stellar Euro 2020 campaign.

Spinazzola’s absence from the latter stages was the one sour note of Italy’s triumphant tournament, the left-back having been one of the stars of Euro 2020 before sustaining a serious Achilles injury in the quarter-final win over Belgium.

Arguably the most competitive position in our Team of the Tournament, Spinazzola edges both Joakim Maehle and Luke Shaw to start at left-back, with the Roma player having bombed forward with regularity to join the attack in an effervescent Italian side.

Italy’s brilliant midfield contingent was a key part in the Azzurri emerging as Euro 2020 winners, with Chelsea‘s Jorginho amongst the chief orchestrators of a side far greater than the sum of its parts.

Jorginho dictated the play from a deep-lying midfield role, whilst he led the tournament with a European Championship record of 25 interceptions and was Euro 2020’s most fouled player as opposition sides sought to shutdown Italy’s central conductor.

Talks of the Ballon d’Or contention are perhaps hyperbolic, but it’s been some season for the 29-year-old who has become just the tenth player to secure Champions League and major international tournament winners’ medals in the same year.

The driving force of Denmark’s run to the semi-finals, Hojbjerg followed a strong debut season at Tottenham with an impressive tournament at Euro 2020.

The 25-year-old has largely been a defensive enforcer since signing for the north London side, but showcased more attacking aspects of his game this summer and finished with three assists – ranking second for goals provided.

Featuring alongside Thomas Delaney in a central role, the presence of the Borussia Dortmund midfielder allowed Hojbjerg to push further forward, regaining possession higher up the pitch as an industrious Denmark side reached the last four.

Major tournaments are often a platform for young players to emerge and fans unfamiliar with Spanish football were perhaps not aware of Pedri’s promise, well, they certainly are now.

The 18-year-old was brilliant as Spain reached the semi-finals, outshining more senior colleagues to be named as the tournament’s best young player.

No player bettered the Barcelona teenager for passes into the final third, through balls or goal-creating actions, whilst he was magnificent in Spain’s semi-final defeat to Italy as he completed 65 of 66 passes across the 120 minutes of action.

🗣️ Luis Enrique: "What Pedri has done in this tournament, at 18, no one has done. Not even Andrés Iniesta did that; it's incredible, unique."

UEFA's team of Technical Observers have named Pedri as their Young Player of the Tournament 🇪🇸👏#EURO2020 | #ESP pic.twitter.com/NDwfFoXt2O

Pedri is undoubtedly a special, special talent and one Barcelona will look to as the Catalans bid to emerge from a transitional period at the Camp Nou.

Patrik Schick wrote his name into European Championship history with arguably the goal of the tournament against Scotland, one of five the Czech forward scored during his side’s run to the quarter-finals.

Shick scored five of the Czech Republic’s five goals to finish as Euro 2020’s leading scorer alongside Cristiano Ronaldo, with the 25-year-old providing the quality cutting edge in attack for Jaroslav Šilhavý’s side.

Only England prevented the Bayer Leverkusen star from scoring during his five fixtures and Premier League recruiters will have taken notice of his goalscoring exploits this summer.

Harry Kane was being questioned and criticised from all angles following a lacklustre group stage campaign, failing to score and producing some concerning performances as England looked short of firepower early on.

Four games later and the Tottenham striker had become the first Three Lions captain to lead his side to a major final since 1966, sparking into life during the knockout stages to level Gary Lineker as England’s all-time record scorer at major tournaments.

Kane scored the late clincher against Germany in the last-16, before netting twice in the hammering of Ukraine in the quarter-finals.

His best performance came in the semi-final win over Denmark as the 27-year-old showcased just why he is amongst the most complete centre-forwards in world football, a brilliant number nine display that included the extra-time winner at the second attempt after spurning an initial penalty.

Federico Chiesa – who forced his way into the victorious Italy team following a peripheral role in the group stages – deserves a mention for his role in the Azzurri’s knockout stage success.

Another player who ignored outside noise to become England’s key figure at Euro 2020, the groans that greeted Raheem Sterling’s inclusion in the side for the Three Lions’ opening fixture replaced by cheers following his crucial winner against Croatia.

Sterling followed up that goal with crucial efforts in wins over the Czech Republic and Germany, scoring the winner against the former before netting the opener in a confidence-boosting last-16 win over the Germans.

Sterling endured a disappointing campaign at Manchester City last term, but he remains central to England’s hopes of success in the coming years and has now been involved in 22 goals in his past 23 appearances at international level.

The Boy from Brent is all grown up 🦁 @sterling7 pic.twitter.com/8ZHblHYqTl

Had England emerged victorious in Sunday’s final at Wembley, he may well have been crowned as the Player of the Tournament.

Read – Five of the most memorable European Championship finals ever

Read Also – Forza: How Mancini’s archetypal Italians have rekindled my love for the Azzurri

Kane over Chiesa? Give me a break.

Kane plays center forward or striker, which is the position of immobile so he deserves that postion! Chiesa playes 9 or 11, LW or RW, so you have put him either in place of schick or sterling. And i will choose chiesa over any of them any day of the week.

Federico Chiesa played 4 solid matches, 2 mvps against wales, spain, also against belgium and England he was a terror only to be outshined by insigne and bonucci. Not to mention he scored against austria from sub to put italy front. Every single match he played he was noticeable and sharp! What did flop sterling do when england needed him? Not even had to the balls to take penalties. And who is patrick schick again? Someone who just scored some flashy goals? Kane is a Center forward i understand but if you don’t put someone who carried italy on the best 11 then something is wrong with you.