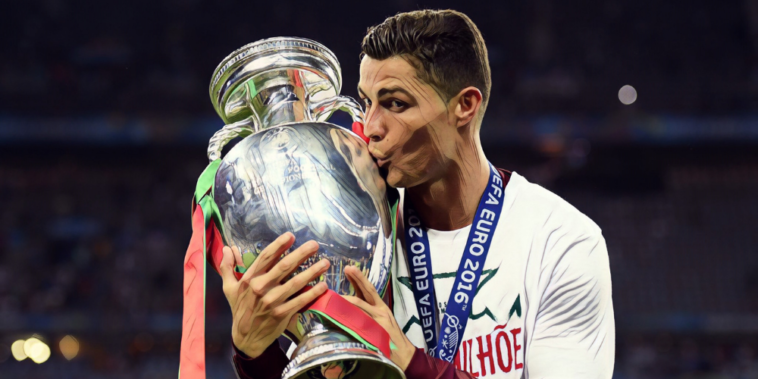 Euro 2016 saw Portugal secure a first ever major trophy, as Fernando Santos’ side upset host nation and favourites France to clinch the tournament in extra-time.

It had been a far from vintage run to the showpiece for the Portuguese, who overcame the loss of talisman Cristiano Ronaldo in the opening exchanges of the final to bring long-awaited success to the Iberian nation.

Elsewhere, Wales returned to a major tournament for the first time since the 1958 World Cup and upset the odds to reach the semi-finals, though it was contrasting fortunes for England who suffered an embarrassing exit to Iceland in the last 16.

The last line of defence for a Portugal side who withstood heavy pressure to be crowned champions, Rui Patricio was unfortunate not to scoop the Man of the Match accolade during the final win over France.

Patricio kept four shut-outs including in both the semi-finals and final, making seven saves during that latter fixture as Portugal frustrated the host nation to be crowned European champions.

The Bayern Munich youngster was excellent as Germany reached the quarter-finals without conceding a goal, before stepping up confidently to convert his penalty in the shoot-out victory over Italy in the last eight.

Germany’s run was ended in the semi-finals by host nation France, but the 21-year-old starred at right-back to showcase his maturity and versatility, having previously largely featured in a midfield role for RB Leipzig and Bayern.

Boateng shone as one of the best defenders in the tournament and impressed as Germany made little fuss in reaching the semi-finals, Joachim Low’s world champions conceding just twice before their exit to France.

The centre-back passed brilliantly from the backline and marshalled the defence superbly, whilst his strike from distance in the last-16 win over Slovakia was one of the goals of the tournament.

One of football’s favourite pantomime villains rose to the occasion at Euro 2016, bouncing back from his disappointing World Cup two years earlier to become a hero of Portugal’s success.

Pepe made a series of crucial interventions as Portugal conceded just one goal in the knockout stages and was outstanding in the final win over France.

Pepe’s career has often seen his shithousery dominate, but this was a tournament in which the excellence of his defending could be appreciated with Cristiano Ronaldo describing the defender as his nation’s best player.

Raphael Guerreiro had secured a move to Borussia Dortmund before the tournament and the Bundesliga side will have been pleased to secure a deal early, with the left-back impressing for eventual champions Portugal.

Guerreiro grew in importance as the tournament reached its latter stages and impressed with his forward forays, the French-born full-back providing a constant threat with his forward thinking and delivery from wide.

Joe Allen was one of two Welshman included in the Euro 2016 Team of the Tournament, the Liverpool midfielder an unsung hero of Chris Coleman’s overachieving side.

Allen underlined what made Wales successful at the tournament with his mix of guile and graft, knitting the side’s passages of play together with clever passing and movement.

Allen produced a perfect pass to assist Aaron Ramsey’s opener in the group stage win over Russia and shouldered responsibility for making things happen in the side.

The world champions fell to France in the semi-finals, but their performances until that point were excellent, with the control that Kroos helped exert a key reason behind their success.

Kroos at his finest is a pleasure to watch and he underlined his status as one of the game’s great midfielders with another strong showing at a major tournament.

Gareth Bale took headlines for his goalscoring exploits, but it was Ramsey who was at the heart of everything good about Wales.

The midfielder was brilliant in an all-action role in the nation’s engine room, running himself into the ground for the cause and scoring in the 3-0 group stage thrashing of Russia.

No player in the tournament provided more than Ramsey’s four assists and Wales struggled in the absence of the influential star, with the Arsenal midfielder suspended for the semi-final defeat to Portugal.

Named as the tournament’s best player, it was Griezmann who spearheaded the host nation’s charge towards the final to score six goals and win Euro 2016’s Golden Boot.

His haul of goals was double the total of the next highest scoring players, with Griezmann exceptional in the knockout rounds with five goals, including doubles in wins over the Republic of Ireland and Germany.

The forward’s six goals was the second-highest amount ever scored in a single tournament, behind only compatriot Michel Platini who netted a staggering nine in 1984.

Griezmann drifted around the side in a free role behind Olivier Giroud and cemented his status as one of the world’s best forwards, with the Atletico Madrid star the leading light of a France team who could – and perhaps should – have lifted the trophy.

Dimitri Payet was one of the Premier League’s best players during the 2015/16 season at West Ham and continued that form into Euro 2016, playing a pivotal role in France’s qualification for the knockout rounds with late goals against Romania and Albania.

Payet was often box-office viewing with his mix of immaculate close control and superb technique providing France with a brilliant attacking option.

His influence waned as the tournament went on, but Payet was one of the most watchable stars of a tournament that largely failed to live up to expectations.

Portugal began poorly with three consecutive group stage draws, sneaking through due to the expanded format following a 3-3 draw with Hungary that saw Ronaldo score twice.

He netted again in the semi-final win over Wales, though saw his final end in personal heartache after being withdrawn in the first half through injury.

Ronaldo offered animated encouragement to his side from the touchline with his knee heavily strapped, his teammates securing a 1-0 win that saw Ronaldo become the first Portuguese captain to lift silverware.