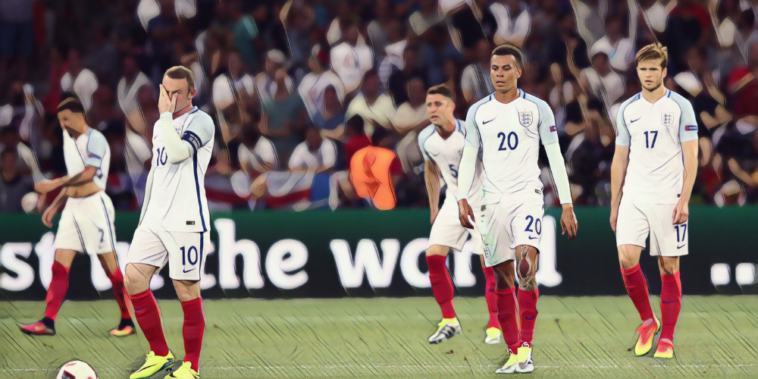 England’s embarrassing exit at Euro 2016 remains one of the national side’s lowest moments, as underdogs Iceland upset the odds to eliminate Roy Hodgson’s side.

It was a defeat that remains etched into England’s footballing folklore for all of the wrong reasons, a side making their major tournament debut – and possessing a population of just 330,000 – coming from behind to beat one of Europe’s proudest sporting nations.

Wayne Rooney’s early penalty had handed the Three Lions a fourth-minute lead, but goals from Ragnar Sigurdsson and Kolbeinn Sigthorsson turned the tie around within the opening 20 minutes to leave England shell-shocked.

Hodgson resigned in the immediate aftermath of a defeat regarded as England’s worst in major competition since losing to a part-time US outfit 66 years earlier, a miserable Euro 2016 campaign ended in ignominious fashion in Nice.

We look back on a low moment for England and the starting XI who were beaten by Iceland at Euro 2016.

Joe Hart came in for fierce criticism during Euro 2016 with no player making more mistakes directly leading to goals, the goalkeeper at fault for Gareth Bale’s goal against Wales in the group stages, before another costly error to allow Sigthorsson’s winner to squeeze through his grasp against Iceland.

It was arguably the start of a downward spiral for the former Manchester City shot-stopper who won the last of his 75 England caps in 2017, his career since having consisted of underwhelming spells at Torino, West Ham and Burnley.

The 34-year-old is currently a reserve option at Tottenham.

One of the few players in this side that remains a part of Gareth Southgate’s current set-up, though Walker was arguably at fault for Iceland’s equaliser after losing Ragnar Sigurdsson on a long throw.

Walker’s career has had an upward trajectory since that disappointment however, leaving Tottenham for Manchester City in a £45m deal in 2017 and winning three Premier League titles across the past four seasons.

The 56-cap right-back is amongst the most experienced members of Southgate’s squad at Euro 2020 and will hope to nail down a starting position for the tournament, amid competition from Kieran Trippier and Reece James.

Cahill endured a performance to forget against Iceland with a sluggish display at centre-back, the Chelsea centre-back’s defending reactive rather than proactive on a chastening evening.

The defender spent eight years in the England set-up and won 61 caps, though called time on his international career after being a bit-part member of the squad that reached the 2018 World Cup semi-finals.

The 35-year-old currently plays his club football at Crystal Palace after leaving Chelsea in 2019, Cahill having won eight major honours during his time at Stamford Bridge.

Euro 2016 proved largely the end of Chris Smalling’s international career, the resignation of Roy Hodgson and appointment of Gareth Southgate seeing the centre-back phased out.

Southgate had reservations over Smalling’s ability to play out from the back and those concerns appeared to be shared at club level, the defender falling out of favour at Manchester United and joining Roma after a decade at Old Trafford.

The 31-year-old has enjoyed a renaissance in Italy, though appears unlikely to add to his 31 caps for the Three Lions.

Like Hart, Rose is another player whose career has taken a sharp downturn in recent seasons.

The left-back was named in the PFA Team of the Year in consecutive campaigns in 2016 and 2017 and remained a part of the England set-up at the 2018 World Cup, though fell out of favour with both club and country soon after.

Rose failed to make a single appearance for Tottenham in 2020/21 after being marginalised under Jose Mourinho and is currently without a club after his release this summer.

Culpable on both goals as England crashed out of Euro 2016, Eric Dier was hauled off at half-time for Jack Wilshere as the Three Lions sought greater impetus in their midfield.

Dier initially impressed as a holding midfielder for both Tottenham and England after signing for the north Londoners from Sporting Lisbon, though his progress has stalled in recent campaigns despite a decision to focus on one position at centre-back.

He has remained a regular in England squads and has won 45 caps since his debut in 2015, though was overlooked for Euro 2020 following a disappointing season at Spurs.

Once hailed as the future of English football, Dele Alli burst onto the scene at Tottenham after signing from third-tier MK Dons, winning back-to-back PFA Young Player of the Year accolades.

Euro 2016 came after the first of those seasons, with Alli having impressed to score 10 league goals and break into the senior England team.

Alli remained a part of the fold for the 2018 World Cup and scored in the last eight win over Sweden to secure England’s place in the semi-finals, though is one of several players to have suffered a downturn post-Russia.

Alli came in for criticism from former Spurs manager Jose Mourinho over his attitude and application, with the 25-year-old having failed to recapture the heights he scaled between 2015 and 2018.

The midfielder failed to score a single goal in 15 league appearances during the 2020/21 season and faces a fight to convince Spurs’ incoming new manager – whoever that will be – that he can be a part of his plans.

The final major tournament of Wayne Rooney’s record-breaking international career ended with defeat to Iceland, despite the England captain opening the scoring from the penalty spot.

Rooney burst onto the scene at Euro 2004 with a series of exhilarating performances as a teenager, though his major tournament record struggled to live up to early expectations amid a series of misfortune and underperformance.

Rooney formed part of a Golden Generation of talent that ultimately failed to deliver trophy success, though remains one of the finest footballers the Three Lions have ever produced.

He retired from international duty officially in 2017 – though came back for one farewell fixture – as England’s record outfield appearance maker and leading scorer, having netted 53 goals in 120 caps.

Sturridge came off the bench to score a dramatic stoppage-time winner against Wales in the group stage, a win that proved crucial in England’s progression to the knockout rounds.

The Liverpool forward retained his place for the Three Lions next two fixtures and was arguably the best of a bad, bad bunch in the defeat to Iceland.

Sturridge scored eight times in 27 appearances for England, but injuries have prevented the now 31-year-old from reaching the potential he showed as a youngster.

He departed Liverpool having scored 50 goals in 116 league appearances in 2019 and is currently without a club after leaving Turkish side Trabzonspor last year.

Raheem Sterling won the penalty for Wayne Rooney’s opener before producing an otherwise anonymous performance during the defeat to Iceland, the winger coming in for fierce criticism following the embarrassing exit.

Sterling made his England debut as a teenager but initially struggled to produce end product at international level, including a three-year, 27-game barren run between 2015 and 2018.

The 26-year-old has elevated his game to new levels since signing for Manchester City however, becoming a key figure in a side that has dominated English football, scoring 78 goals in 195 league appearances.

Sterling looked set to face a fight for his position in the side at Euro 2020, but has so far started the opening two games, netting the only goal of the game in the win over Croatia, his first goal at a major tournament.

Harry Kane’s Euro 2016 campaign will always be remembered for the bizarre decision to have England’s leading goal threat on corner kicks, with the Tottenham striker struggling to make an impression during a goalless tournament.

Kane has seen developed into a talismanic figure for club and country however, scoring 34 goals in just 56 caps to rank sixth amongst England’s all-time leading scorers.

The forward won the Golden Boot during the 2018 World Cup though has come in for criticism in the early stages of this summer’s tournament, the England skipper producing two largely anonymous displays against Croatia and Scotland.

Read Also – Five of the best players from Euro 96