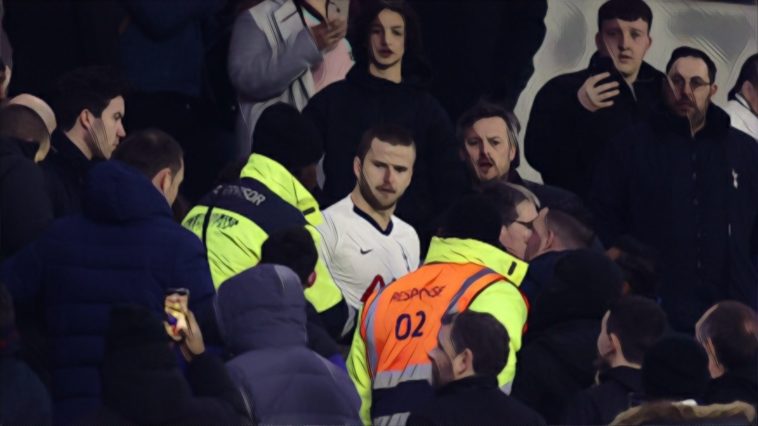 While Norwich City fans were celebrating a massive win at the Tottenham Hotspur Stadium that sent them into the FA Cup quarter-finals, a rather bizarre and unusual incident involving one of the players from the match was occuring.

Eric Dier trudged over to the advertising hoardings near the tunnel, before hurdling approximately 20 rows of seats to confront a spectator in the crowd. It quickly became a massive talking point online, as everyone sought to find out what happened.

So what happened after Spurs vs Norwich finished?

The Englishman entered the crowd to confront a spectator, which ended up with the midfielder in the middle of a shemozzle with a mix of fans and stewards.

Look at Eric Dier, turned into prime Venom walking over those chairs. pic.twitter.com/Yo9kxJMqRQ

One person in the crowd in the above video appears to be waving at the player with both hands, possibly to signal that he doesn’t want to engage with him, before showing Dier what looks like a two-fingered salute and speeding away in the other direction. It’s not entirely clear whether or not this was the person Dier wanted to confront, but we wouldn’t stick around either if his 6ft 2″ frame was coming at us either.

Dier was then calmed down before eventually being shuttled away from the crowd by security.

Why did Eric Dier enter the crowd on Wednesday night?

In the immediate aftermath of the incident in question, some Twitter accounts were speculating that Dier was confronting a spectator who had racially abused one of the player’s teammates.

Jascha Selby, one of the first people to post a video of the incident online, claimed this was the reason for Dier entering the crowd.

Eric Dier just came into the stand and had a fight with fan next to me 😱 pic.twitter.com/nMGVcDWegX

I took this video- he was being racist

There are two reasons why this is likely to not be the case: Dier’s comments in Selby’s video and Jose Mourinho’s comments after the game.

In the clip you can hear Dier say “he’s my brother” several times, while Mourinho confirmed that his family was there and that his brother was “not happy with the situation”.

“I think Eric did what we professionals cannot do but probably every one of us would do,” the Spurs manager said in his post-match press conference.

“I repeat we professionals cannot do it, but I repeat I am with the player and I understand the player. The fans were with the team until the last penalty kick that we missed.

“This person insulted Eric, the family was there, the younger brother was not happy with the situation.”

The area in which the incident occurred is a corporate section. Mourinho said that the area behind the dugout isn’t seating “real Tottenham fans”.

“The people that are in these privileged positions by the tunnel, of course some are Tottenham fans,” he added.

“But I think a lot of corporate, a lot of invitation, a lot of people with special status [are in there] and probably it is the place of the stadium where I sometimes have doubts over if they are the real Tottenham fans, because these [real fans] are the ones who support the boys until the last.”

Both the Football Association and Tottenham Hotspur say the incident is under investigation. It is likely that Dier will get some sort of sanction as a result of his actions.

On the prospect of Spurs taking action against the player, Mourinho said: “If the club does that I will not agree, but he did wrong.”

See Also: Five of the biggest Premier League upsets ever