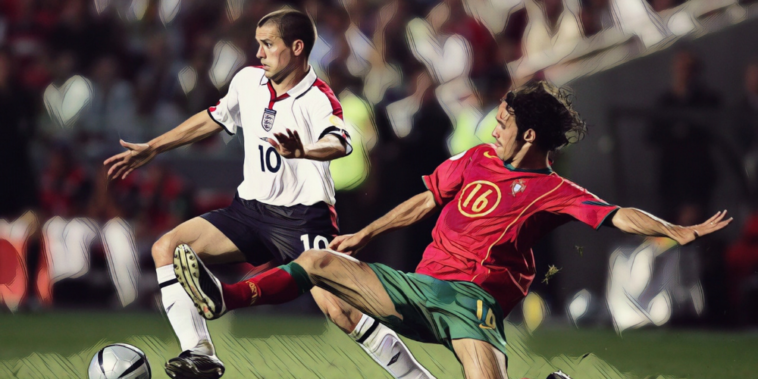 England are through to the quarter-finals of Euro 2020 and face Ukraine on Saturday for a place in the last four, with Gareth Southgate’s side seeking to reach the semi-finals of a second successive major tournament.

Victory would represent huge progress for the Three Lions who have traditionally fallen short when reaching the last eight, England having progressed to just four semi-finals since winning the World Cup in 1966.

Ahead of England’s clash with Ukraine in Rome, we’ve decided to look back at some of the nation’s most memorable quarter-final games at major tournaments.

Four years after winning the World Cup on home soil, England travelled to Mexico amongst the favourites to defend the trophy.

Alf Ramsey’s team progressed through the group stage as runners-up to Brazil, before being paired with West Germany in the last eight – the side the Three Lions had defeated after extra time in the 1966 final at Wembley.

England began brilliantly to take a two-goal lead within the opening 49 minutes, Alan Mullery and Martin Peters scoring either side of the half-time interval to put the holders in control at the Estadio León.

In the energy-sapping Mexican heat, however, England began to wilt with West Germany staging a second-half fightback, Franz Beckenbauer reducing the deficit with 22 minutes remaining.

Ramsey made the controversial decision to substitute Bobby Charlton following West Germany’s first goal, in what proved to be the midfielder’s final appearance in an England shirt after informing the manager he did not want to be considered for selection again following the tournament.

Uwe Seeler’s header’s eight minutes from time forced an additional 30 minutes and West Germany – riding the momentum of their comeback – found an extra-time winner through the prolific Gerd Muller to progress.

Amongst the most notorious eliminations in England’s major tournament history, the 1986 World Cup quarter-final between England and Argentina saw the best and worst of the iconic Diego Maradona.

The match was surrounded by pre-game tension, with the rivalry between the teams dating back to Alf Ramsey’s labelling of Argentina’s players as ‘animals’, after being incensed by the overly aggressive tackling of the South Americans during a World Cup clash in 1966.

Two decades later and the Falklands War had escalated tension to huge heights with Argentina fans having been pictured burning the Union Jack at the World Cup in Mexico.

For all the talk of animosity before a ball had been kicked, once the referee’s whistle was blown it was Maradona who ensured it would be an occasion never forgotten.

We remember Maradona’s historic goals against England in the 1986 World Cup. 🏆🇦🇷 pic.twitter.com/3mNrKvcpAG

In the space of four second-half minutes, Maradona took the game from England and sealed Argentina’s progress to the semi-finals, his first goal coming in controversial fashion as he beat goalkeeper Peter Shilton to the ‘punch’ to open the scoring.

Maradona used an outstretched hand to punch the ball beyond Shilton for his now infamous ‘Hand of God’ moment, an incident which went unnoticed by the officials as Argentina led.

His second was a goal not of this earth as he danced and weaved beyond a succession of desperate England challenges, running from inside his own half to score arguably the World Cup’s greatest ever goal.

Much has been made of England being on the ‘favourable’ side of the draw at Euro 2020, but lessons should be learned from previous editions with an unfancied Cameroon side coming close to an almighty shock at Italia ’90.

Few had given Cameroon a chance heading into the World Cup, though a side comprised mainly of journeymen figures from France’s lower divisions caused a gargantuan upset by beating holders Argentina in the group stage.

Through as group winners the African nation beat Colombia in the last-16, before facing an England side who started as heavy favourites.

England took an early lead through David Platt, but two goals in four second-half minutes from Emmanuel Kundé and Eugène Ekéké threatened to change the narrative of the tie.

Gary Lineker’s ability from the penalty spot ultimately saved England from an embarrassing exit, sending the goalkeeper the wrong way to force extra-time, before repeating the trick in the added period to send the Three Lions through.

English hopes had been raised after progressing from a difficult 2002 World Cup group unbeaten, before a 3-0 thrashing of Denmark in the last 16 increased optimism ahead of a quarter-final showdown with Brazil.

Michael Owen’s first-half goal handed Sven-Göran Eriksson’s side the lead in Japan, but two goals either side of the break from Rivaldo and Ronaldinho turned the game around for the South Americans.

Rivaldo’s equaliser came just seconds before the half-time whistle, Ronaldinho driving forward beyond the England midfield before teeing up the forward to fire home a leveller.

David Seaman’s mistake handed Brazil the lead just five minutes after the restart, the veteran goalkeeper caught flat-footed following Ronaldinho’s speculative free-kick from distance, the star’s effort looping up and over the Arsenal shot-stopper who had anticipated a cross.

Ronaldinho’s red card seven minutes later offered England hope, but the Three Lions were unable to find a breakthrough in the Shizuoka heat.

Penalties have regularly been a curse for England at major tournaments, with the Three Lions’ ‘Golden Generation’ having fallen short at Euro 2004 after shoot-out sorrow.

Michael Owen handed England a third-minute lead with a clever flicked finish to open the scoring, but the substitution of Wayne Rooney through injury after just 27 minutes changed the complexion of the game.

Rooney had lit up the tournament to date with the 18-year-old having scored four goals in just three group stage fixtures, announcing himself as arguably the most exciting young talent in Europe.

The departure of the Three Lions’ talisman saw host nation Portugal grow in confidence and they found a leveller seven minutes from time, Helder Postiga heading home from close range to restore parity.

Sol Campbell thought he’d won it for England in dramatic fashion, only to see his last-minute header disallowed at the Estádio da Luz.

Rui Costa’s stunning strike and Frank Lampard’s sharp finish saw the game finish 2-2 after extra time, with Portugal progressing after misses from David Beckham and Darius Vassell in the shoot-out.

Goalkeeper Ricardo saved from the latter before confidently stepping up himself to score, discarding his gloves before slamming home the winner to secure Portugal’s passage to the last four.