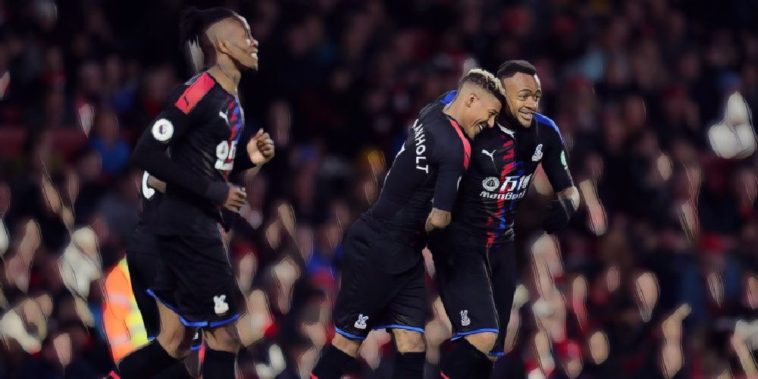 Arsenal defensive frailties came to the fore once again as they surrendered a 2-0 lead against Crystal Palace to draw 2-2, though Unai Emery was critical of the role of VAR on the result.

It was a frenetic start at the Emirates, Sokratis squeezing the ball past a number of Palace players after a scramble in the box from a corner, the Greek centre-back giving the Gunners the lead in just the seventh minute.

With the fans still settling back into their seats, 1-0 quickly became two, Sokratis’ defensive partner David Luiz turning the ball home from another corner to double Arsenal‘s lead with just nine played.

However, Palace would be handed a lifeline with half-an-hour on the clock, the Eagles eventually being awarded a penalty for a foul Wilfried Zaha, the Video Assistant overruling Martin Atkinson’s decision to book the Ivorian for simulation having spotted contact from Calum Chambers, the ever-reliable Luka Milivojevic dispatching the resulting spot-kick.

In typically Arsenal fashion though, Emery’s side would once again surrender their lead, Jordan Ayew deservedly drawing the Eagles level on 53 minutes, nodding past Bernd Leno at the back post from a James McArthur cross.

2 – After winning 49 consecutive Premier League games when going two goals ahead, Arsenal have dropped points in each of the last two matches where they have taken a two-goal lead (also drawing 2-2 v Watford in September). Backbone. pic.twitter.com/ARdtf0qPg4

The Gunners thought they had won it late on though, Sokratis striking in the 83rd minute after yet another scramble in the box at a set-piece, though VAR chalked the goal off with Chambers once again involved, the defender judged to have fouled Milivojevic in the build-up, the game ending 2-2.

Speaking after the game, Unai Emery was critical of the role of the video technology, with the decision to disallow the late winner looking particularly soft.

“For me there is no confusion – it is not a good decision. We deserved to win, we had a good reaction after they equalised, we scored but then they didn’t count it.

“We didn’t concede many chances apart from the penalty to score. Our reaction was very good, also the supporters help us in the last minutes to score the third goal and win the match but this doesn’t happen.”