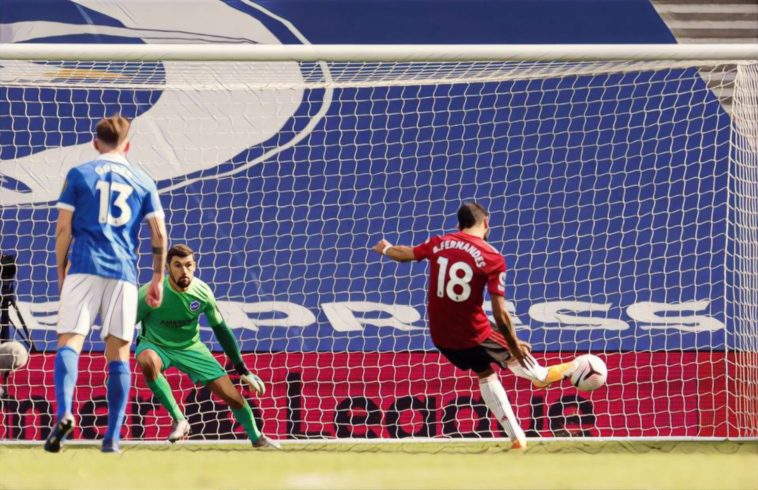 Referees are pointing to the spot on more occasions than ever before with the help of Video Assistant Referees and controversial changes to the handball law, the latest round of Premier League fixtures having seen plenty of penalties including three awarded to Leicester at Manchester City.

The opening three weekends of the Premier League season have seen an incredible 20 penalties awarded in just 28 matches, a huge increase on last season when there were just eight awarded in 30 fixtures across the division.

Should that pace be maintained we will see a record-breaking season in terms of spot-kicks, and following the plethora of penalties we’ve decided to look back at the campaigns in which the most were awarded.

Here are the five seasons with the most penalties awarded in Premier League history:

Video Assistant Referees were first introduced in the Premier League during the 2018/19 season, a campaign which saw a huge 103 penalties awarded across the division.

Manchester United were awarded the most penalties in the Premier League and scored nine of their 12 spot-kicks, with Crystal Palace scoring the most of all teams after converting an impressive 10 of the 11 they received.

The dozen spot-kicks awarded to United also saw the club fall just one short of matching the previous all-time single season record for a Premier League side, with Leicester City (2015/16) and Crystal Palace (2004/05) having each previously received 13 penalties in one campaign, though the Red Devils later eclipsed this figure with 14 spot-kicks during the 2019/20 campaign.

The 2010/11 Premier League season saw Manchester United win a record-breaking 19th league title, though it was neighbours Manchester City who won the most penalties after being awarded nine of the 105 spot-kicks given across the division.

City scored eight of those penalties, whilst Blackpool’s Charlie Adam took eight penalties throughout the campaign, more than 16 of the sides in the Premier League that season.

Adam scored seven of those kicks with his sole miss coming against Tottenham, in what proved to be just the third Premier League campaign in which a century of penalties were awarded by officials.

Antonio Conte guided Chelsea to the Premier League title during his debut season at Stamford Bridge, though the west London side were awarded just four of the 106 penalties given to top flight sides throughout the campaign.

Bournemouth were awarded the most penalties after being handed 10 opportunities from the spot, whilst Hull City set a Premier League record for most conceded with 12, their dozen spot-kicks conceded contributing to their relegation to the Championship.

Of the 106 penalties awarded 81 were scored with 17 saved and eight missed, goalkeepers recording a save percentage of 16% from all penalties faced.

Another title-winning season for Chelsea features highly in this rankings and this time the champions would be huge beneficiaries of the referees’ willingness to point to the spot, leading the division with 12 awarded and 11 scored.

Frank Lampard scored 10 of those spot-kicks in what proved to be the midfielder’s finest goalscoring season, the former England international behind only Alan Shearer for the most penalties scored in Premier League history.

Chelsea’s 11 penalties scored was also the joint-most ever recorded in a single season, matching the 11 netted by Crystal Palace during the 2004/05 campaign.

The most prolific season in Premier League history in terms of penalties came in 2006/07, a huge 112 spot-kicks awarded by whistle-happy officials across England’s top tier.

Arsenal led the way for penalties awarded with 12, whilst Blackburn Rovers were prolific at both ends of the pitch, winning nine penalties in addition to conceding a league-leading 10.

Those statistics also include two awarded against Bolton Wanderers which were both saved by Jussi Jaaskelainen, the Finland international one of just seven goalkeepers to save two penalties in the same Premier League fixture.

Of the 112 penalties awarded a record 87 were scored, though this could be eclipsed this season with Premier League officials set to award 271 spot-kicks if the current rate is maintained across the campaign.

Looking at Some of the Crazy Results This Premier League Season

[…] was the most prolific season in terms of penalties, with whistle-happy referees awarding a huge 112 throughout the campaign. There have already been 41 penalties awarded thus far with less than a quarter of the season […]