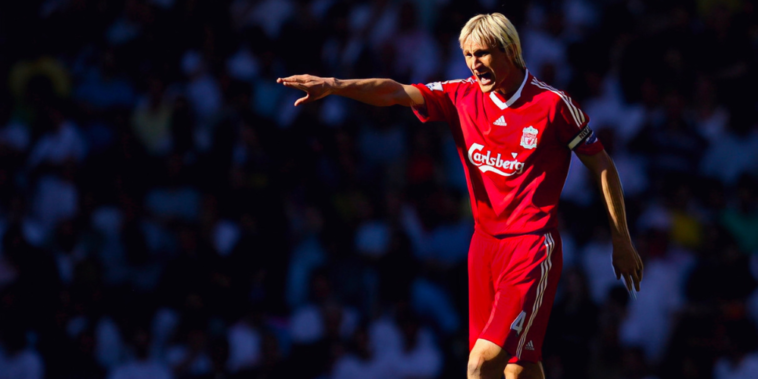 Sami Hyypia’s arrival at Liverpool did little to capture the imagination of the club’s fanbase. Arriving from the Eredivisie for a modest fee, little was known about the latest centre-back signed to address the Reds’ rearguard.

The nineties had been a difficult period for Liverpool. The birth of the Premier League had coincided with the Merseysider’s decline, as the Reds were unseated from their position of power as English football’s dominant force.

Liverpool had won just one League Cup across the first seven seasons of the Premier League and as the new millennium neared were in a period of transition. Roy Evan’s reign had failed to revive the club’s fortunes and the ‘Spice Boy’ culture was beginning to be eased out.

Among Houllier’s first tasks was to address the club’s defensive deficiencies. His first season had seen Liverpool finish seventh, with their 49 goals conceded just three less than relegated Blackburn. Particularly vulnerable in the air, his search for a centre-back took Houllier to Willem II.

In the ranks of the Dutch side was Hyypia, a formidable Finland international who had played an integral role in the club’s recent rise.

Hyypia first rose to prominence in his homeland at MyPA, where he twice won the Finnish Cup. The son of two parents each with footballing backgrounds, he was invited for a trial at Newcastle United in 1995, before making the move to the Netherlands with Willem II.

Across four seasons he helped the Tricolores punch above their weight in the Eredivisie, captaining the side to a runners-up finish in his final season to secure Champions League qualification for the first time in the club’s history.

Ron Yeats – a cornerstone of Liverpool’s 1960s revival and a scout at that time – took little time to be convinced the Finnish giant was a gem.

“The first time I saw him I couldn’t believe how good he was,” Yeats said to the Echo.

“I thought I’d better go and see him again and he didn’t disappoint the second time. He was strong in the air and a great tackler but the thing that really struck me was how good he was on the ball. He very seldom gave it away.

“I went back and told the club that this was a lad we really needed to buy. I said they couldn’t afford to take their time because otherwise someone else would be in for him.”

Liverpool had taken note of Hyypia’s impact during a superb season in Tilburg and completed a £2.6m deal to bring the towering defender to English football. As Manchester United and Leeds each took turns to break the Premier League’s transfer record for a defender, the Reds unearthed a bargain.

Throwing it back to this Hyypia header at Elland Road 👊#LEELIV pic.twitter.com/aYCB3IHLDt

The imposing summer signing formed a formidable axis alongside fellow recruit Stephane Henchoz, with the duo’s complimentary characteristics serving as the backbone of Houllier’s improving side.

Astute additions had added to a core of exciting academy graduates and the 2000/01 season proved one of stunning success. Houllier’s side embarked on a run of momentum towards silverware, ending with a cup treble and Champions League qualification.

As Robbie Fowler and Jamie Redknapp struggled for fitness, Hyypia captained the side for much of the campaign as Liverpool won the UEFA Cup, FA Cup and League Cup. The centre-back was a stalwart of their success, featuring in 58 of Liverpool’s 63 games during a marathon campaign.

Having struggled for silverware across the past decade, Liverpool were back competing for major trophies and Hyypia’s consistency and class was a huge part of their return to prominence.

Hyypia was named as full-time captain in 2002, following the departures of Fowler and Redknapp. However, it was a position he held for just a year as his performances began to dip and an emerging Steven Gerrard was handed the armband.

“Coming from Finland and being the Liverpool captain is a great honour. I still remember the day I lost the captaincy to Stevie and I am very happy that happened,” Hyypia recalled to the Echo.

“I knew it meant a lot to Stevie and he grew up as a man and a player so much after that. For myself, I started to play better when I lost the captaincy. It worked both ways.

“It may have even made our relationship even deeper as he saw I was okay with the manager’s decision and took it as a professional and a man. I think he [Gerrard] respected me more after that. I wanted to help Stevie and if he had a problem, I was always there.”

Reds legend Sami Hyypia is celebrating his birthday today, so it's only right we remind you of 𝒕𝒉𝒊𝒔 glorious volley. #TBT pic.twitter.com/YBfCuz7wZ5

Hyypia remained a prominent part of the side and his performances improved without the armband. Rafael Benitez’s arrival as manager in 2004 then provided the defender with a new partner, as Jamie Carragher was converted to centre-back on a full-time basis.

The Hyypia-Carragher axis was a fine marriage. The calm and aerial command of the Finn was an ideal match for the robust challenges of the Bootle-born defender, while a shared positional intelligence and co-ordination largely compensated for a lack of pace.

In Europe the duo excelled. Benitez’s first season saw Liverpool reach a first Champions League final in two decades, with their resilient rearguard at the forefront of their success.

Each were outstanding as Juventus were held to a goalless draw in the quarter-finals in Turin, with an injury-ravaged side holding firm to reach the last four. Hyypia – so often a weapon at set-pieces – had volleyed home a superb goal to open the scoring in the first leg at Anfield.

Not your typical centre-back.

Liverpool also failed to concede in the semi-finals, as a Chelsea team who finished 37 points ahead of the Reds were eliminated. The final failed to follow a similar trend as Liverpool came from three goals down to win a thrilling final against AC Milan in Istanbul, but their defensive fortitude had provided the platform for a fifth European Cup success.

Hyypia started the final as Liverpool won the FA Cup the following season, his missed kick irrelevant as the Reds won another major trophy with a shootout success against West Ham in Cardiff.

His latter years saw his role reduced, as pretenders in Daniel Agger and Martin Skrtel emerged to compete for a first-team place. Despite high hopes for the duo, neither came close to making the impact Hyypia had across a decade at Anfield.

“Liverpool was my favourite team when I was young, so it was a dream come true,” he told the Echo.

“When I signed the deal, I thought it was only the beginning and that I needed to show people I could play football. If someone said to me I would spend 10 years playing for this great club on the day I signed, I would have said they were mad.”

Hyypia called time on his career with Liverpool at the end of the 2008/09 season, one which saw the Reds narrowly miss out on an elusive Premier League title. He made 464 appearances in all competitions and won ten trophies, cementing his status as a club great.

For those who played alongside him his impact was immeasurable, with former teammate Carragher labelling the Finn as the club’s greatest signing of the Premier League era.

“When I think of where Liverpool were in 1999, they were a team finishing sixth and seventh in the league,” Carragher told Monday Night Football.

“That team was known as a weak team, got bullied. He [Hyypia] came in and over the next ten years, he was never injured, and Liverpool went from a soft touch to a team that was mentally and physically very strong and he was a massive part of that.

“The price tag, the never being injured, the ten years of service and the trophies that he won, that’s why he’s top.”

An unknown on arrival, his instantaneous impact helped return Liverpool to prominence and ensured Hyypia will be remembered as an Anfield icon.