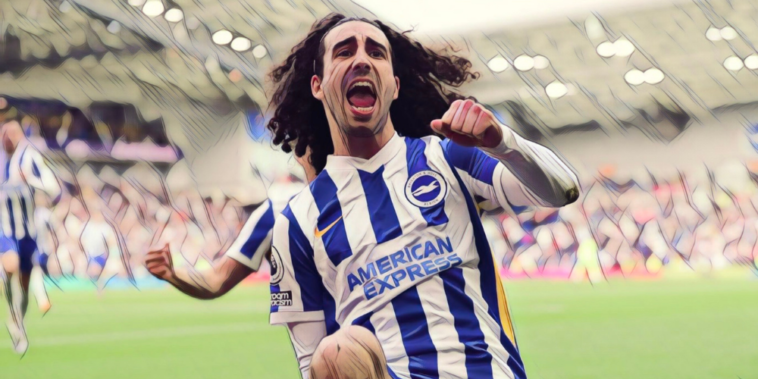 The modern evolution of football has seen full-backs become key contributors at both ends of the pitch, tasked with both defensive discipline and providing a source of creativity further forward.

The ever-increasing influence of full-backs has made top-class defenders coveted, with Chelsea and Manchester City having become involved in a fight to sign Marc Cucurella.

Cucurella excelled during a brilliant debut season at Brighton last term and has emerged as one of the most in-demand defenders of the window, following a season in which he provided a constant attacking outlet for the Seagulls.

We’ve decided to see how Cucurella compared to the most creative defenders in the division last season, here are the five full-backs with the most chances created from open-play in 2021/22.

Joao Cancelo is arguably a full-back only in name for Manchester City, with the Portugal international taking up one of the most unique roles in the Premier League.

Cancelo began most fixtures named as a nominal left-back for the champions last season, but his role is one that sees the 28-year-old drift into advanced areas both centrally and on the flanks.

😯 Joao Cancelo registered as many shots on target as Riyad Mahrez and Richarlison in the Premier League last season (23) pic.twitter.com/GOElpMMsvs

Cancelo could conceivably operate as a number ten or winger for Pep Guardiola’s side, while his comfortability on either flank is a major asset to City’s squad.

Last season he scored once and provided seven assists in 36 league appearances, in which he created 36 chances from open play.

Just two players provided more than Andy Robertson’s 10 assists in the Premier League last season, with the Liverpool left-back having reached double figures in a league season for a third time.

Liverpool’s full-back duo of Robertson and Trent Alexander-Arnold are crucial to Jurgen Klopp’s system and each provide an elite source of ammunition to the club’s forward line.

Robertson’s influence at both ends of the pitch has made him one of the elite full-backs in Europe and his 38 open-play chances created ranked fourth in the Premier League last season.

Cucurella ranked third in the Premier League for chances created from open play among defenders, following a season of impressive performances at Brighton.

The Spaniard was an unmissable presence during his debut campaign at the Amex Stadium, with his distinctive hair and all-action energy a stand-out for the Seagulls.

😳 Only Reece James (42) created more of all Chelsea players pic.twitter.com/zyfDJeuh7S

Having signed from Getafe for a fee of £15.4m last summer, Graham Potter’s side are set to make a huge profit on the player after just a single season on the South Coast.

Reece James ranks second on this list following the most productive season of his Premier League career, with the England international directly involved in 14 league goals for Chelsea last season.

James’ impressive numbers came despite missing periods of the season through injury, with his 1865 minutes played significantly less than each of the other names on this list and around just 57% of the game-time Cancelo racked up for Manchester City.

The 22-year-old’s average of 0.5 assists per 90 minutes was also greater than each of the other names on this list and he will hope for a campaign of full fitness as he bids to stake a claim as the division’s most creative defender.

In all competitions last season, James scored six goals and provided 10 assists for the Blues.

One of the most influential footballers in the Premier League, Trent Alexander-Arnold has transformed perceptions of creativity from full-back in English football.

Last season the Liverpool defender ranked second for assists with 12, one short of the single season record he set for a defender in 2019/20.

Is this the season Trent Alexander-Arnold makes history? 🎯 pic.twitter.com/5DGQc3eYdI

The Reds’ right-back has reached double figures on three occasions and has 45 career assists in the Premier League, ranking him third overall among defenders despite not celebrating his 24th birthday until October.

Alexander-Arnold led the Premier League for expected assists, key passes, forward passes, crosses, through balls and shot-creating actions in 2021/22, while his 51 open-play chances created was a league-leading total among defenders.