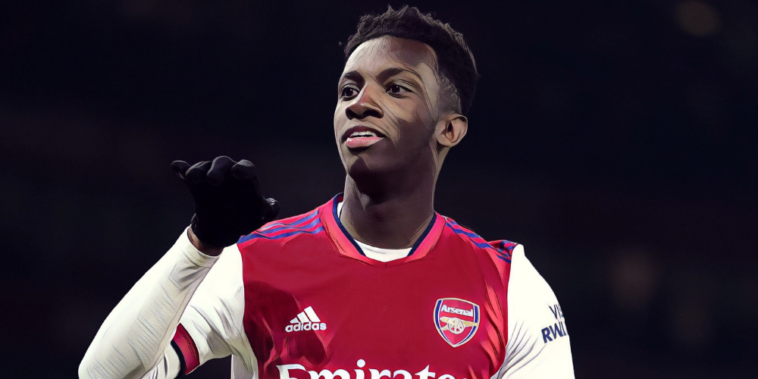 Crystal Palace have opened talks to sign Eddie Nketiah as the forward approaches the end of his contract at Arsenal.

Nketiah has six months remaining on his contract with the north Londoners and has turned down a new deal with the Gunners, with the forward keen to secure regular first-team football after finding himself on the fringes at the Emirates.

Palace made a bid for the 22-year-old during last summer’s transfer window, but their £12m offer fell short of Arsenal’s £20m valuation.

The Times are reporting that the Eagles have now returned with renewed interest in Nketiah and have opened talks over a deal, as Patrick Vieira looks to add to his attacking options this month.

Palace are currently without Wilfried Zaha and Jordan Ayew with the duo on international duty at the Africa Cup of Nations and Nketiah could add to the club’s exciting collection of young talent.

Nketiah has enjoyed a prolific record for England at youth level and is the u21’s all-time leading scorer with 16 goals from 17 appearances, but he has failed to earn an opportunity at Arsenal and has not started a league fixture this season.

He has scored five goals in three League Cup appearances, however, and is now keen to secure regular football at senior level.

Brighton have also been credited with an interest in the forward, whilst clubs in Germany – including Bayer Leverkusen and Borussia Monchengladbach – are also understood to be considering an approach.