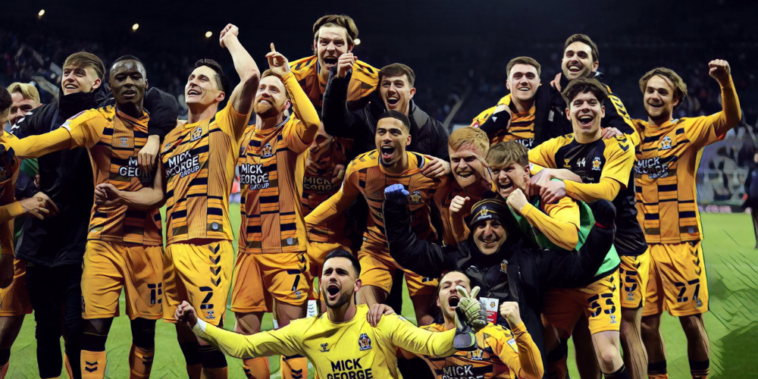 Our FA Cup awards honour the best – and worst – of the competition’s third round action.

Kidderminster Harriers continued their run in this season’s competition after causing another upset to reach round four, the lowest-ranked side still in the FA Cup beating Championship side Reading.

Russell Penn’s side came from behind to seal a famous win at a packed Aggborough Stadium, with the second-tier visitors – in particular goalkeeper Rafael Cabral – unnerved by a spirited Kiddy side.

Rafael endured a nightmare afternoon as two mistakes contributed to his side’s shock exit, first allowing Sam Austin’s effort to squirm in to hand Kidderminster an equaliser and increased belief.

Kidderminster’s match-winning moment came eight minutes from full-time in a goal that somewhat epitomised an FA Cup upset, as the ball was bundled over the goal-line by Amari Morgan-Smith as Rafael failed to deal with an in-swinging corner-kick.

The National League North side are into round four, where their next assignment will be the giant-killing of Premier League West Ham – currently 115 places above them in England’s football pyramid – at Aggborough.

Cambridge – 16th in League One at present – rode their luck and defied the odds to take the scalp of Premier League opposition, with Joe Ironside scoring the winner 11 minutes from time to spark jubilant celebrations from the away support.

The hero of the contest was goalkeeper Dimitar Mitov, however, who made a string of saves to deny the hosts. Mitov made a huge nine saves during a fantastic individual showing, including a brilliant finger-tip save to turn Jacob Murphy’s effort onto the crossbar.

Arguably his best save came in the final seconds, however, diving to claw away Joelinton’s header in stoppage-time to seal a clean sheet and a classic FA Cup upset.

Middlesbrough were made to work for their place in round four, scoring a 95th-minute winner after Mansfield had come from two goals down to level an enthralling encounter.

The visitor’s first goal of the afternoon earns our Goal of the Week accolade, as Uche Ikpeazu opened the scoring after just four minutes.

The 26-year-old demonstrated all of his pace, power and shooting ability with this individual effort, holding off the desperate Mansfield challenges before lashing home a left-footed strike from the edge of the area.

Shayne Lavery has enjoyed a strong first season with Blackpool since arriving from Linfield last summer, with the forward the club’s leading scorer across all competitions so far this season.

The 23-year-old endured an afternoon to forget as Blackpool crashed out in a cup upset this weekend, however, squandering a lead to lose to fourth-tier Hartlepool.

Lavery missed a series of chances and could reasonably have scored a hat-trick on another day, the worst of all a gaping open goal in which he somehow contrived to put the ball over the bar.

It was a moment that left the Northern Ireland international on his knees in bemusement and it proved a costly miscue as Hartlepool came from behind to win 2-1 and reach round four.

The best viewing of the FA Cup’s third round was found at Oakwell as Barnsley and 10 man Barrow played out 120 minutes of incredible action.

There were nine goals shared between the sides as League Two Barrow refused to be beaten against their Championship opponents, finding three equalisers in a pulsating clash before eventually losing 5-4 in extra-time.

Five of the nine goals came inside the space of a chaotic final 12 minutes as the two teams exchanged punches, with a 90th-minute leveller from Barrow forcing the added period.

Superb strikes from Barrow’s Ollie Banks and Barnsley’s Devante Cole only added to the excitement, before Carlton Morris’ second of the afternoon eventually secured Barnsley a fourth round meeting with Yorkshire rivals, Huddersfield.

Thomas Tuchel rotated his options as Chelsea cruised into the fourth round with a 5-1 win over Chesterfield, a game which included an impressive debut from 17-year-old Lewis Hall.

One notable moment in the second half was the introduction of Lewis Baker to the side, the academy graduate making just his second appearance for the west Londoners.

Incredibly, his first came in an FA Cup third round tie against Derby some EIGHT years and three days ago, with the midfielder having since enjoyed a nomadic career that has included eight different loan spells.

2014 – Lewis Baker is making his first appearance for Chelsea since an FA Cup third round tie against Derby County in 2014 – 8 years and 3 days ago. Awaited.

Now 26, the former England u21 international most recently spent last season with Turkish side Trabzonspor and whilst his future seems set to be away from Chelsea, his appearance made for a fascinating piece of FA Cup trivia.

Paul Digby believes Cambridge United’s 1-0 win at Newcastle will be a result that his side’s fans talk about for decades to come, with the midfielder telling talkSPORT about the emotions that followed the club’s upset of top-tier opponents this weekend.

“It’s just incredible really. You talk about the magic of the FA Cup and you see these ties. Wins like this are talked about 20-30 years later.”

Despite suggestions otherwise, the FA Cup certainly retains its soul in the earlier rounds and for lower league sides occasions don’t come much bigger than this.

Anyone that said the magic of the FA Cup is over was wrong 💫🔮 pic.twitter.com/6mEmbs8mko

It was a weekend of goalkeeping gaffes in the FA Cup, with the likes of Jack Butland and the aforementioned Rafael amongst the shot-stoppers to make embarrassing errors.

Perhaps the worst showing came from Blackburn’s Aynsley Pears, however, who was arguably at fault for all three goals as the Championship high-flyers crashed out to League One Wigan Athletic.

Pears allowed Max Power’s effort from distance to bounce beyond him in the second half, before somehow bundling Jack Whatmough’s tame header over his own goal-line for a calamitous own goal.

The 23-year-old was then caught out in stoppage-time as Thelo Aasgaard curled a cross-shot into the far top corner, his performance one littered with errors and the leading contribution behind Blackburn’s exit.

Read – FA Cup third round – Team of the Week