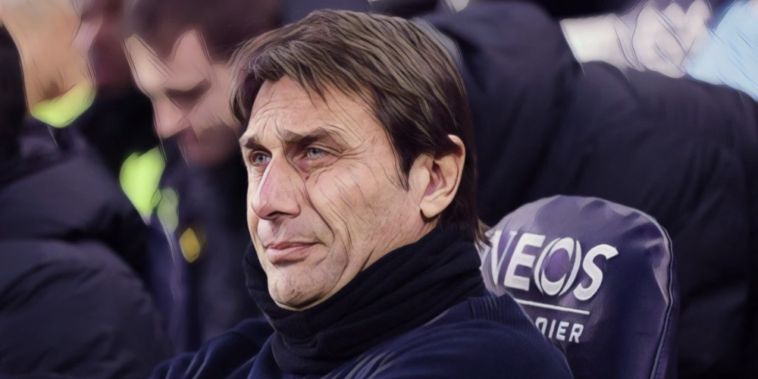 Antonio Conte wants Tottenham to be more ‘focused’ and ‘nasty’ as the club look to improve results this season.

Spurs have won just once since the season’s restart and have lost six of their last ten games in the Premier League, following a 4-2 defeat at Manchester City on Thursday evening.

The defeat came despite the north Londoners leading two-nil at half-time and continued a poor record against the division’s top sides this season. In seven games against the Premier League’s ‘Big Six’ and Newcastle, Spurs have taken just one point.

Conte has called on his side to improve their focus and defensive record, with Spurs having conceded 31 goals this season – more than any side in the top half and more than both West Ham and Everton, each of who are in the relegation places.

“We are making progress in some aspects but in other areas we need to come back like last season and be a bit more solid, focused and nasty because in my opinion we have improved,” Conte told his pre-match press conference ahead of Monday’s clash with Fulham.

“We are scoring many goals, our organisation to press was much better than last season. I repeat if we compare the game we played last season against Manchester City and yesterday, apart from the result I have to be happy much more than the performance of last season.

“Then they had 75% of possession, created a lot of chances and we were really lucky but at the same time we were really good to stay and suffer and to win the game.

“Yesterday we played a good game and one we prepared, face-to-face and open. We scored two goals but we need to try and find the same solidity as last season and learn again to suffer together in the moment.”

The loss to Manchester City followed a disappointing derby defeat against Arsenal last weekend, as Spurs lost at home to their north London rivals for the first time since 2014. Conte believes recent results have proven that his side still have some way to go ‘to be considered a top team’.

“There is a lot of improvements we need to make if we watch the final result [against Arsenal] is 2-0 but then at the end you see their goalkeeper was the best player on the pitch,” he said.

Tottenham vs the big six & Newcastle this season.

“Yes they were lucky but we did not do enough to be considered a top team. We have to build on the possibilities of these two games [against Arsenal and Manchester City].

“We have to find a game and something that we had last season. We have lost something. A team like Tottenham in last 10 games has conceded 21 goals, it is not possible for a club that wants to stay there and fight [for the top four].”

“To concede 21 goals in the last 10 games…we have to find a balance and improve the positive situations to turn the season,” he added.

“To have this achievement in England of staying in top four means one team like [Manchester] City, [Manchester] United, Chelsea, Arsenal and Liverpool stay out.

“That is before I consider other teams growing in an incredible way like Newcastle. We made a fantastic achievement [last season] but it was also good to only be focused on the league and to have no injuries.

“This season we started to face four competitions, the Champions League..takes a lot of energy and it is the same for others in Premier League.

“The situation this season is different we tried to improve the squad this summer but this is only the start. To send away nine players and bring others is not so simple to be competitive, I can tell you. We need time and patience.”