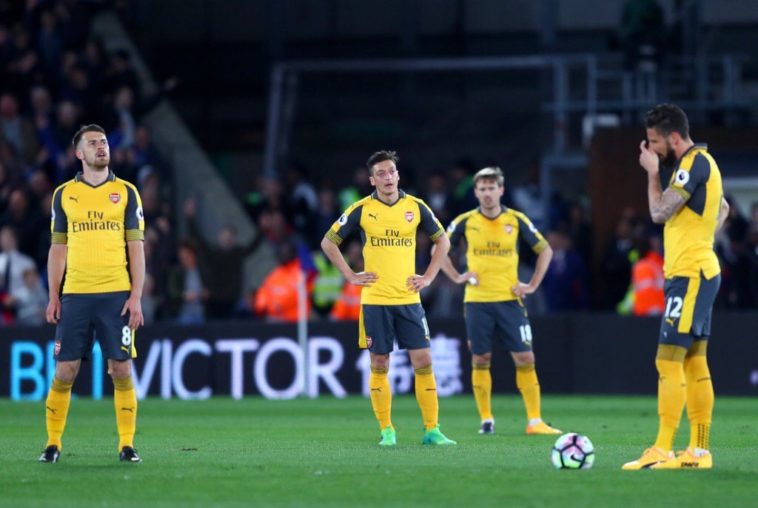 Arsenal have won just one of their last five league games and seem to be on a downward spiral. Fans cannot contain their frustrations and the players just don’t appear to be determined enough to win their matches. The recent defeat against Crystal Palace symbolised the decline in Arsenal’s performances that has caused so much anger.

Olivier Giroud is not motivated by winning trophies

Arsenal players have been accused of lacking ambition in recent seasons. Olivier Giroud confirmed this when he admitted that he was not motivated by titles. How can a professional footballer at the highest level of English football not be motivated by winning titles?

Giroud came to Arsenal in the summer of 2012 from Montpellier. He had just helped his side to the Ligue 1 title, winning the Golden Boot by scoring 21 goals in 36 league games, providing 12 assists. It begs the question, where has that mentality gone? Has the desire for trophies been beaten out of him at Arsenal?

Giroud is 30 and is Arsenal’s only out-and-out striker. He should not be the only striker leading Arsenal’s attack and this season he has spent most of it on the bench.

This is currently Giroud’s worst season at Arsenal in terms of Premier League starts and goals. He has made just seven starts and scored nine goals. In every other season, he has made over 20 starts and his goal tally has reached double figures.

Giroud signed a new contract in January, extending his stay until 2019. Surely he won’t be content with spending so much time at one club just to battle for fourth spot?

The contract renewals of Mesut Ozil and Alexis Sanchez have been major talking points throughout the season. Ozil recently stated: “I have a contract until 2018 in London and I feel very comfortable there.“

There’s something unsettling about a player being comfortable at their club. Comfortable suggests you’ve got your feet under the table and no longer feel the need to make an effort. Just like the majority of Arsenal’s squad this season, Ozil has been underwhelming when it really matters.

In games against Chelsea and subsequently Bayern Munich, Ozil and his team-mates have not given a good enough account of themselves. It seems slightly arrogant that Ozil is so content at Arsenal. This is because of Wenger.

Ozil certainly wasn’t comfortable at Real Madrid under Jose Mourinho. In fact, Mourinho called Ozil a ‘coward’ and informed him that his responsibilities involved more than just ‘beautiful passes’.

Mesut Ozil is delaying his decision to sign a new contract at Arsenal until Wenger announces his own contract situation. If Wenger goes, it is highly likely that Ozil will follow.

Alexis Sanchez wants to be at club with a winning mentality

Alexis Sanchez is the one player who isn’t complacent and gives his all most of the time. His recent performances have been poor but after being the main man for most of the season, it is no surprise that he just cannot give any more. The burden should not rest on Alexis’ shoulders alone.

He is fed up and will probably leave in the summer. The Chilean international wants to be part of a team that has a winning mentality and, right now, that team is not Arsenal. For Alexis, it’s not a problem.

He has been nominated for the Professional Footballers’ Association player of the year award and there are numerous teams, in the Premier League and in Europe, that are clamouring to sign him. Just like many Arsenal players before him, Alexis will leave the North London side and find success elsewhere.

Theo Walcott was the stand-in captain against Crystal Palace. After the match he said: “I think they wanted it more, you could tell. You could sense that from the kick-off, and it was an uphill battle.”

Evidently, Arsenal’s solution was just to roll over and let Crystal Palace win. That says Palace wanted it more than Arsenal, they knew that since the first minute and they were more than happy for them to get the three points.

No team has a God given right to win a match, but Arsenal didn’t even look like were playing for a draw. Even if Arsenal were aware that Palace wanted to win from the first minute, they had 89 minutes to turn the game around.

More to the point, what sort of captain comes out and says that? Would Tony Adams or Patrick Vieira have made such a ridiculous statement? Walcott’s comments just epitomise the lack of leadership and desire at Arsenal right now. Why didn’t Arsenal want it from kick-off?

Walcott also claimed that this performance wasn’t Arsenal. Four points from the last 15 available paints a completely different picture. Walcott barely made an impact on the game before being substituted in the 69th minute. In fact, he has barely made any impact at the club in 10 years. Just like Wenger, he needs to move on.

The amazing philosophies and ideas that Arsene Wenger brought to Arsenal 20 years ago have been admired, adapted and improved by other world class managers, several of whom are now in the Premier League.

Wenger is far too set in his ways. Arsenal last won the Premier League title 13 years ago. For a club that consistently finish in the top four, this is not acceptable. Arsenal have gone stale under Wenger’s leadership and complacency is now common at a club that used to have ambition and desire to challenge for the Premier League and other significant trophies.

If you support Arsenal, have an interest in writing, and want to share your opinions with the World, please join our writing team