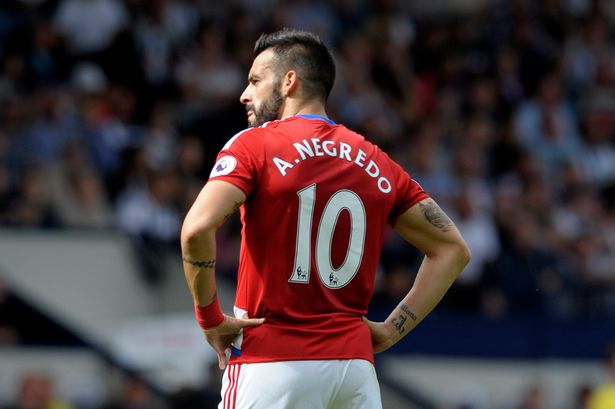 Dividing opinion, it’s a Middlesbrough thing. The manager, formation, should they play two up top? Boro fans have found it difficult to agree on anything, and the effectiveness of Spanish loan man Álvaro Negredo hasn’t avoided debate either.

‘The Beast’, as he’s known, arrived in the summer on loan from Valencia. The lack of transfer fee might’ve saved Boro a considerable amount of money; however his wages, a reported £100,000-a-week, are a significant outlay for a club of Middlesbrough’s size. Rightly or wrongly the amount spent on a player often dictates the expectation levels, with fans demanding instant and consistent results. Whilst there’s no fee as mentioned, Negredo’s high earnings in comparison to his fellow teammates understandably puts pressure on him to perform, and then some.

There are some fans who argue he’s shown nowhere near the levels expected. He’s often been labelled slow, clumsy and ineffective, others however have sympathised with him.

The style of play Boro have employed this season, Aitor Karanka’s much maligned defensive approach, has left the Spaniard isolated up top with little or no support. Some of the Boro faithful argue he’s been on a hiding to nothing, holding balls up only to find his fellow colleagues are nowhere to be seen.

Critics point to his goals record. He’s scored 7 Premier League goals this term, not a great return for a striker of his reputation, and something that’ll no doubt disappoint him. Let’s not forget though, only as recently as the 2013/14 season he was part of a title winning Manchester City squad, helping himself to 23 goals in all competitions.

His movement, his presence in and around the box was lauded, with a wide range of goals, some of the highest quality. You could argue however that most strikers would score their fair share in a team containing the likes of David Silva, Sergio Aguero and Samir Nasri.

However, City sold him. Well, they loaned him to Valencia who had an obligation to buy him after a season as part of the deal. Conspiracy theories were abounding as to why he left. City claimed he was homesick, something which Negredo denies. The general consensus is that City wanted to make way in their squad and Manuel Pellegrini just didn’t fancy him. Edin Dzeko had forced his way back into the team around January of 2014, coinciding with a shoulder injury for Negredo and subsequent loss of form; he would go without a goal for the following 16 games.

A frustrating stint back in Spain (it began with a couple of months out injured), including a first team exile due to a bust up with the manager, saw him manage only 18 goals in two seasons. Not the greatest return you have to say, however Karanka was prepared to take a chance. The player, keen for a fresh start, saw Boro as the ideal place to rejuvenate his career. The Spanish presence at The Riverside no doubt helped seal the deal too.

So, on his displays up to now, is he the player he once was? You could argue if that was the case then perhaps Boro would’ve been nowhere near in competing for his signature. Alternatively, has he just simply been blighted with bad luck and injuries? Either way Boro were prepared to take a chance and made their move in what was seen as an impressive signing.

He started well enough with a goal on his debut against Stoke in the season’s opening fixture. It then took him another 12 games to get back on the scoresheet, a superb brace at Champions Leicester back in November ending the barren run. The quality of those goals showed just what he was capable of when on form. Glimpses of the ruthlessness he displayed at his best at Man City.

However, it was during that sequence of 12 games without a goal that the criticism of Negredo began, a striker misfiring is always an easy target. Understandably, because of the position he plays, without goals it often gets forgotten that he contributes to the team in other ways.

So far he’s made 4 assists in the league. Along with his goal tally of 7 it means that Negredo has had direct involvement with exactly half of the goals Middlesbrough have registered in the league so far.

Further proof of his all round team play is shown in the amount of chances he’s created, with 30 opportunities laid on for his teammates, 6 of them being major opportunities. His effectiveness in the final third is unrivalled; no teammate comes close to what he’s offered.

It’s hard to argue with the stats, yet some supporters can’t get past the goals he’s scored, or more so the lack of them.

One stat that might interest his doubters is the one that explains his apparent lack of composure in front of goal. Of the 57 shots he’s had, only a third of them have been on target.

He’s also missed some guilt-edged chances too; none more so than the one in the 0-0 draw against Arsenal at The Emirates. The chance came in the dying embers of the game as he bore down on goal. Had he scored there it would’ve seen Boro taken the win – fine margins.

In a team where chances are rare, is it unfair to expect a player of his supposed quality to convert more often, or at least trouble the opposing keeper knowing full well you may only get a couple of chances in a game?

Profligacy in front of goal is something Boro can ill-afford, they just simply don’t create enough to be wasteful when a chance presents itself. Negredo is paid handsomely to be the main goal threat, yet some would question whether he warrants the expense.

Fans see a player on crazy money failing to trouble the scorers often enough; at times his body language befitting of someone who is disinterested, often cutting a petulant figure as he barely breaks his stride, the ball passing him by.

Others would argue that those types of instances are as a result of a thankless task – ploughing the lone furrow, battling on his own against the opposition’s defence. With only scraps to feed on it’s not impossible to see why a player might show the odd sign of frustration.

In the aftermath of Aitor Karanka’s departure it’s not hard to imagine Negredo being quietly pleased, happy in the knowledge that he might finally get some more support.

In the games since Steve Agnew has taken charge Negredo has seen himself paired with Rudy Gestede on various occasions, the two showing some signs of a positive link-up. The pair have combined on a few times to good effect, maybe not resulting in an sudden upturn in goals, yet there are signs that something could develop.

Too little, Too late?

There haven’t been any dramatic improvements, just small gradual steps towards changing the mentality of the team. In terms of Negredo’s own performances, he’s still looked isolated at times, but as has been the case more often than not this season he’s put in a shift. It may be that the changes have come too late, that we don’t get to see what a team that’s built round a player like Negredo could’ve actually achieved. We’ll most likely never know.

It’s difficult to see him staying beyond May. Despite his intentions to put down roots on Teesside, it’s highly doubtful he’ll want to visit the likes of Oakwell among others next season. The likelihood is that Middlesbrough are making a quick return to the Championship and it’s hard to imagine Alvaro Negredo spearheading any promotion push.

In the unlikely event he did want to stay, you don’t see Boro exercising their option to buy, the financial package for such a deal wouldn’t be possible for a club in the second tier.

Nothing about Middlesbrough’s Premier League campaign can be really deemed a success, so it’s perhaps beyond the realms of realism to ask the question of whether Negredo has been one too. However, given his overall contribution, is it fair to suggest he’s been a letdown? Or has he done himself justice in what has often been very trying circumstances?

Whatever your thoughts, nobody would blame you for feeling ever so slightly underwhelmed.

Why didn’t he start last week?