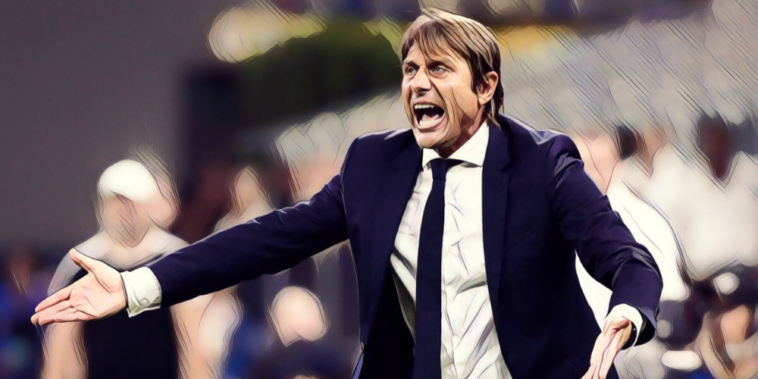 Antonio Conte is set to return to the Premier League as the new manager of Tottenham, the Italian having agreed a deal to replace the sacked Nuno Espirito Santo in North London.

Conte arrives at Spurs boasting one of the most impressive résumés in world football, having won five top-flight league titles amongst his major honours, in addition to gaining international experience whilst manager of his native Italy.

Spurs will hope the appointment of the 52-year-old can see the club challenge for major honours and following Conte’s return to English football we’ve decided to look back on his previous managerial reigns.

Conte’s first senior position came in charge of Serie B side Arezzo, having enjoyed a brief spell as assistant manager at Siena following the conclusion of his playing career with Juventus.

The novice coach’s reign lasted just over three months of the 2006/07 season as he was sacked after failing to win any of his first nine games in charge, though returned just five months later after successor Maurizio Sarri – who later replaced Conte at Chelsea over a decade later – failed to revive the club’s fortunes.

Conte’s return led to an upturn in results as Arezzo secured seven wins from nine games, but their late season revival was not enough to survive relegation from Italy’s second tier as a dramatic final day saw a goal elsewhere condemn the side to the drop.

Despite his near miraculous escape, he departed at the end of the campaign after failing to agree terms on a new contract.

Bari was Conte’s next destination as he joined the struggling Serie B side midway through the 2007/08 campaign, the former Lecce player taking charge of his former side’s rivals.

Conte lost his opening game despite taking a two-goal lead, but results soon started to improve over the second-half of the campaign as the manager’s ideologies were implemented.

Battling relegation at the time of his arrival, the new manager led Bari to a respectable mid-table finish, before overseeing a promotion campaign in 2008/09 as Bari returned to the top flight after being crowned Serie B champions.

Once again the success failed to last as Conte departed soon into the new campaign by ‘mutual consent’, after reportedly growing frustrated with the board’s refusal to finalise a new deal.

Atalanta were the next side to come calling following a difficult start to the season, finding themselves bottom of the division after losing each of their opening four fixtures in 2009/10.

Conte oversaw an initial revival – collecting nine points from his first five games – but a positive beginning soon became surrounded in negativity as the club’s players failed to adapt to the new manager.

Tensions began to rise and reached new levels following a defeat to Napoli in January 2010, as a collection of Atalanta ultras gathered outside the Stadio Atleti Azzurri d’Italia to protest against the players and manager.

Conte’s subsequent confronting of the gathering supporters – who hurled insults in the direction of the manager – led to police protection and the following day saw the Italian resign from his role.

Conte was announced as the new head coach of Siena in May 2010, with the brief to lead a relegated side back into Serie A.

Having began his coaching career as an assistant at Siena, sporting director Giorgio Perinetti was convinced Conte was the right coach to restore the club’s top-flight status.

Conte successfully guided the Bianconeri to promotion after finishing as runners-up to former side Atalanta, his strict fitness regime and team bonding exercises seeing the Serie B side flourish.

However, his dream job came calling and at the end of the promotion-winning campaign and he departed for Juventus.

Conte had been tentatively linked with the Juventus role previously, but positive talks with president Andrea Agnelli led to his eventual appointment, tasked with leading a fallen giant back to the pinnacle of European football.

Juventus had finished seventh in consecutive league campaigns as the club rebuilt following relegation amid the Calciopoli scandal, though the arrival of the club’s former midfielder proved the catalyst behind their return to prominence.

Conte’s first season proved one of stunning success, Juventus crowned champions for a 28th time after completing the Serie A season without defeat, the first team to do so since the division’s expansion to 20 teams.

The signing of Andrea Pirlo from AC Milan proved an inspired move as the veteran flourished in Conte’s innovative 3-5-2 system, with Juventus retaining the Scudetto the following season after finishing nine points clear of nearest challengers Napoli.

Conte’s third season was another of triumph as a third league title in succession was secured, the Bianconeri crowned champions with a Serie A record total of 102 points, as Conte was named as the division’s best manager for a third consecutive campaign.

It was the first time Juventus had won three titles in succession since the 1930s, though hopes of a dynasty failed to materialise as Conte resigned amid disagreements with the board over transfers and long-term planning.

Following a two-year spell with the Italian national side that included a quarter-final exit at Euro 2016, Conte returned to club management at Chelsea – his first role outside his native Italy.

Chelsea had finished the previous season in tenth following a disastrous campaign that saw Jose Mourinho sacked mid-season, with Conte strengthening his squad with the signings of N’Golo Kante, David Luiz and Marcos Alonso.

After three consecutive wins to open the season, an indifferent September proved the turning point in the Blues’ campaign, successive defeats to Liverpool and Arsenal – the second a convincing 3-0 loss at the Emirates – prompting a tactical tweak.

Conte’s switch to the back three system used so effectively at Juventus sparked an upturn in results and performances as Chelsea embarked on a run of 13 consecutive league victories, equalling the single season record set by Arsenal in 2002.

Chelsea’s run propelled the west Londoners towards the Premier League title with Chelsea crowned as champions and Conte named as the division’s Manager of the Season.

The following season proved less successful as conflict with the board arose during a challenging campaign, one that saw Chelsea finish outside the Champions League places, though FA Cup success proved some consolation.

Conte returned to Italy as the new manager of Inter Milan in 2019, guiding the Nerazzurri to a runners-up finish in Serie A during his debut campaign at the San Siro.

Inter finished just a single point behind Juventus in a tightly-fought title race, whilst a season of near misses also included a semi-final exit in the Copa Italia and a Europa League final defeat to Sevilla.

Conte’s arrival had no doubt improved Inter, however, and the following season saw the Italian end Juventus’ run of domestic domination, a nine-year sequence of titles that he had began during his time with the Bianconeri.

The Italian’s ability to improve players and fit his squad into a system that maximises their strengths was evident, as Inter took 41 points from a possible 45 since late January to power down the straight.

Inter were crowned champions in fine fashion after finishing 12 points clear of runners-up AC Milan, the goals of Romelu Lukaku and Lautaro Martinez propelling the Nerazzurri towards a drought-breaking Scudetto.

As has so often been the case for Conte, the success was not to be sustained as the club’s concerning financial situation led to the sales of Lukaku and Achraf Hakimi, with Conte resigning from his position after expressing his unhappiness with the side’s ambition.