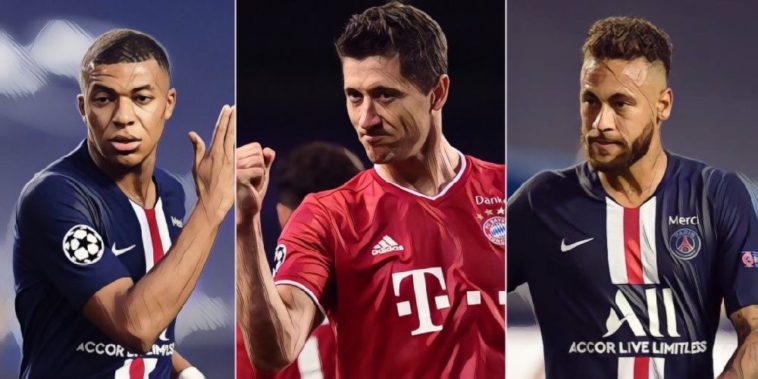 It’s finally upon us, the club football calendar has reached its pinnacle with German giants Bayern Munich set to face off against crude oil specialists PSG in a mouthwatering UEFA Champions League clash in Lisbon.

Tonight’s game is set up to be a fascinating encounter between two teams jam-packed with some of the planets best footballing talent, and ahead of the eagerly awaited clash we’ve set about performing the completely pointless, but ultimately enjoyable task of picking a Bayern v PSG combined XI.

So in an attack-minded 4-2-1-3 formation, here’s our Champions League final combined XI…

Neuer is one of the pioneers of the sweeper-keeper position and on his a day, a colossus between the sticks capable of producing match-winning saves. Now 34, the Germany international’s form has dipped slightly in recent seasons, although after excellent showings in the quarter and semi-finals the World Cup winner will be hopeful of adding a second Champions League success to his extensive list of honours.

While Bayern are quite rightly seen as the best team in European football at the moment, Lyon did expose their high defensive line repeatedly on Wednesday night, and PSG coach Thomas Tuchel will likely try to do so again using the pace of Kylian Mbappe and Neymar – so you’d have to expect Neuer’s sweeper-keeper abilities will be put to the test in the showpiece event.

Another off the VfB Stuttgart production line, 25-year-old Kimmich is quite simply a wonderfully gifted and intelligent footballer. His versatility, creativity and tactical understanding has once again been on show recently after reverting from the central midfield role he had made his own to cover at right-back for the injured Benjamin Pavard.

Despite playing in a team full of stars, Kimmich is probably one of the first names on the teamsheet, the 48 cap Germany international’s understated brilliance in everything he does often going somewhat under the radar, despite being massively appreciated by his teammates and coaches.

His battle with Mbappe will be one of the game’s key duels, and it will be interesting to see how much Kimmich will have to curb his contribution in attack due to the presence of the electric Frenchman.

No player has created more chances in the Champions League this season than Joshua Kimmich (27).

And he picked up ✌️ assists tonight. #UCL pic.twitter.com/iq43V1Op6B

Still going strong at 35-years-old and the leader of the PSG defence, Thomas Tuchel will need his soon to be departed skipper to put in a massive performance to stop a Bayern side that has scored a whopping 83 goals so far in 2020.

Since his arrival at AC Milan in 2009, Silva has shown himself to be the prototype of the modern centre-back: composed in possession, physically dominant, and tactically astute.

PSG are understandably a hard club to like and few will rejoice if they triumph on Sunday, however, it’s a testament to Silva’s enduring ability and character that few will begrudge the 92 cap Brazil international picking up a winners medal.

It really is hard to believe that David Alaba is still only 28-years-old, the versatile defender having made his Champions League debut for Bayern as a 17-year-old back in 2010.

It’s fair to say things have gone ok for the six-time Austrian footballer of the year, the boy from Vienna winning nine Bundesliga, five DFB Pokal’s, and a Champions League title over the last decade.

Long considered one of world football’s premier left-backs, Alaba has seamlessly converted to centre-back in recent years, where his ability on the ball is a huge asset to Bayern in terms of being able to transition the ball forward from defence.

Alaba will have to use every ounce of his pace and defensive nous against PSG duo Neymar and Mbappe though, with neither of his potential defensive partners – Jerome Boateng or Niklas Sule – inspiring a huge amount of confidence.

One of the breakthrough stars of this seasons Champions League, it’s been a whirlwind couple of years for 19-year-old Ghanian born Canada international Alphonso Davies.

Just two years ago the talented youngster was playing as a winger in the MLS for Vancouver Whitecaps, before moving to Bayern, converting to left-back and becoming one of the most eye-catching players in European club football’s most complete team.

Davies phenomenal pace and attacking prowess first caught the attention of Premier League fans during Bayern’s 3-0 destruction of Chelsea back in February, although his sensational run and assist for Kimmich’s goal against Barca has taken the excitement surrounding the youngster to new heights.

Davies is clearly blessed with the speed, dribbling ability and directness that you would expect from a converted winger, but in many ways what has been most impressive during his rise to prominence has been the ease with which he has taken to the defensive requirements of playing at full back.

A class act. Everything the 29-year-old does just oozes quality, with his sublime technique, vision, and often underrated work rate marking the La Masia graduate out as one of the finest central midfield operators in the game at present.

Having been understandably unable to break up the legendary midfield trio of Busquests, Xavi, and Iniesta at the Nou Camp, Thiago decided to link up with former Barca boss Pep Guardiola in Bavaria in 2013 and has won seven straight Bundesliga titles since moving to Germany.

European success is the only box the Spain international has left to tick in terms of his Bayern career, and having let the club know he would like to move on this summer victory against PSG would be the perfect way to sign off.

Germany international Goretzka has struggled to hold down a regular starting place at the Allianz Arena since his move from Schalke in 2018, although he has thrived recently alongside Thiago after being handed an opportunity due to Kimmich dropping back into defence.

The now-beefed up 25-year-old was sensational against Barca, where his physicality and dynamism laid the foundations for the Bavarians to annihilate the La Liga side. Goretzka simply steamrollered his way over the Barca midfield in Lisbon, making Sergio Busquests look like a feeble old fool and Frenkie De Jong like a panicky little kid in the process.

He’s a funny auld character is Tommy Muller. He’s not actually very good at anything really, yet he’s been one of the most efficient and effective footballers in the game for the last decade. Say in comparison to the man he’s been keeping out of the Bayern side this season, for example, Phillipe Coutinho, the Brazilian is far superior in terms of every technical metric by which you could judge a footballer.

However, Muller simply delivers the goods, his ability to ghost into goal-scoring positions at the opportune moment is well known and rightly lauded – even if the technique he uses to finish chances often looks unorthodox. While his Bundesliga record of 21 assists this season clearly demonstrates his ability to pick the right pass at the right time, as well as a high level of football intelligence.

In fact, there is a big possibility that the winning goal of the 2020 Champions League final will come from a scuffed Muller shot that bobbles agonisingly into the corner of the net in almost slow motion. After all Tommy M is the ‘3 am pull’ of footballers, it might not look pretty, but it gets the job done.

Somewhere along the line, due to his petulant behaviour and his money-motivated choice to leave Barcelona for PSG, it’s been somewhat lost that Neymar da Silva Santos Junior is one of the most naturally gifted and joyously skilful players to have ever graced a football pitch.

The 28-year-old attacker’s performance against Atalanta was a timely reminder of his standing in the game, and PSG fans will be hopeful that he brings his shooting boots against Bayern, the Brazilian number 10 having missed a host of presentable chances in the quarters and semi’s, despite excellent overall showings.

Neymar’s numbers in terms of goals and assists in Ligue 1 have been impressive since his record-breaking move in 2017, but the harsh reality is – Farmers League jokes aside – nobody really respects what you do in French domestic football.

Without delivering the Champions League, Neymar’s move will be seen as a failure, not just on a personal basis, but also from the point of view of the club’s mega-rich Qatari owners.

After repeated – and at times embarrassing – failure in recent years, nobody gave PSG much of a chance ahead of this seasons tournament, yet here they are one game away from the trophy they and their marquee signing covet more than anything.

While the likes of Erling Haaland and Jadon Sancho have rightly been receiving all the plaudits this season, make no mistake Mbappe is by far the best young player in the World, and bar a career-threatening injury, a future winner of multiple Ballon d’Or awards.

Mbappe burst onto the scene as a 17-year-old during Monaco’s enthralling run to the Champions League semi-finals, with his searing pace, skill, and ruthless finishing immediately marking him out as a generational talent.

Far from resting on his laurels or letting the hype go to his head, the 21-year-old World Champion’s dedication to his craft has seen him steadily improve since making a mega-money move to PSG in 2018, netting a sensational 51 goals in 49 Ligue 1 appearances for his hometown club.

Having originally looked like missing out on the final rounds of UCL action after picking up an ankle injury in the Coupe de France final, Mbappe has looked sharp after featuring for 30 minutes against Atalanta and for the full game against RB Leipzig.

Rarely fazed on the big occasion, Mbappe will have been licking his lips when seeing the ease with which Memphis Depay and Karl Toko Ekambi got in behind’s Bayern’s defence in midweek.

In 2008, my parents saved up for a quarter to offer me the first edition of the Mercurial Pink Panther worn by the great @FranckRibery

Now in 2020 I will be wearing the new version at the Champions League final.

Lewandowski is currently on a career-best streak of form, which really is saying something considering the consistent level at which he has plundered goals for both Borussia Dortmund and Bayern Munich over the years.

The Polish striker’s 34 goals in 31 league games this season, takes his total Bundesliga tally to 227, behind only Klaus Fischer and the great Gerd Muller in the overall standings.

Bayern’s number 9 has netted in every game during his sides run to the final, and if he can add a brace to his 15 goals so far on Sunday, he’ll match Cristiano Ronaldo’s record of 17 strikes in a single Champions League campaign.

? Best striker in Europe this season?

Lewandowski’s brilliant late header against Lyon in the semi-final was the perfect demonstration of the type of intelligent movement and athletic prowess that has made the 32-year-old one of his generations best penalty box predators. If Thomas Tuchel and PSG are to stop the Bayern juggernaut lifting Old Big Ears™ come 10 o’clock tonight, then restricting the impact of the world’s best out-and-out number nine is imperative.