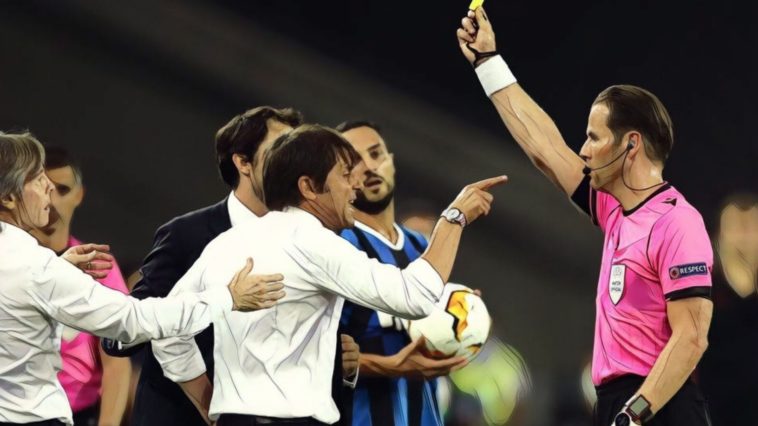 The best tweets of the week from the world of football, featuring Harry Maguire’s arrest in Mykonos, Antonio Conte’s war of words with Sevilla’s Ever Banega, all of the Champions League chatter, and Ronald Koeman’s appointment as Barcelona manager.

The Man United captain was arrested in Greece after an altercation with a police officer, a first for a Brit abroad, of course.

Harry Maguire still in police custody as Manchester United express reluctance at paying the entrie bail fee this summer. They prefer to spread the cost over two years with a series of add-ons.

Maguire pleads not guilty to bribery and assault charges

But his legal team have come up with a very solid defence of their client.

Meanwhile, Antonio Conte is keeping his fights to the sideline.

Antonio Conte reportedly offered Ever Banega outside for a fight after the match after the midfielder threatened to pull at his hair to check if it was a wig. https://t.co/mywGLAwHAq

Christian Eriksen becomes the first player ever to lose the Champions League and Europa League final within the space of two seasons. You can take the man out of Tottenham. You can’t take Tottenham out of the man.

This is scarily accurate.

Love how the Europa League starts with 3,726 teams and yet the last four is always Sevilla, Shakthar, a dark horse and whichever Premier League club had a poor domestic season the year before.

This was the best bit of Champions League punditry you will see all season.

'A marketing strategy for a drinks brand' and 'far worse' – Just why are #Leipzig and #PSG so unpopular? @RichieSadlier explains #RTESoccer #RTESport #UCL pic.twitter.com/ZAl1iEAadu

I think this Lewandowski guy is pretty good at football.

Did Lewandowski score in his last 15 CL games?

Robert Lewandowski has scored as many goals in all competitions this season (55) as Atletico Madrid scored in La Liga.

That Serge Gnabry guy is pretty decent too, although it turns out we’ve been pronouncing his name incorrectly all these years.

This stat is a mind melter. Or maybe I’m just getting too old.

“Siri, show me what a grown man being murdered by a little girl looks like.”

Ronald Koeman was appointed Barcelona manager this week, but we probably haven’t seen the last of him as Netherlands manager.

I knew he reminded me of somebody…

You will never, ever find a better pun in all of football than this.

Reading should be thrown out of the Football League for this crime of a promo video.

BREAKING: Reading FC will start the season on -48 points after releasing this promotional video.

“There’s not much I can say,” said manager Mark Bowen. “We are bang to rights..”pic.twitter.com/HqASdVvwJd

Read: A year of darkness – the pain of losing three Aston Villa legends in 12 months