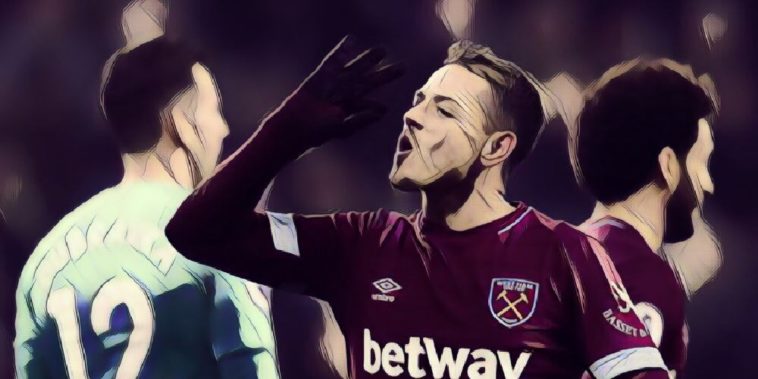 Javier Hernandez has warned his West Ham teammates that they must change their mindset if they are to push for a place in Europe.

By their recent standards, it has been a good season for West Ham, who currently sit in ninth in the Premier League, and are looking above rather than over their shoulders.

They are unbeaten in their last five league games at the London Stadium, although away from home it is a different story, with the Hammers without a win in their last six on their travels.

Not only is there a contrast in their form at home and away, but they have had mixed results against the sides at opposite ends of the table, beating Arsenal and drawing against Liverpool, before losing against Cardiff last weekend.

Speaking ahead of this weekend’s clash against bottom side Huddersfield, Javier ‘Chicharito’ Hernandez has urged his teammates to change their mindset and ‘think like the top clubs’ if they are to push for a place in the Europa League.

“When you want to be in Europe, you need to think like the top clubs and need to have that consistency,” the Mexican told the official West Ham website.

“Those are the sort of traps you need to avoid and when you are a big club you don’t get involved with. You need to think and perform in the same way in every game so that, if you win, you are the best or if you lose, you are the worst.

“That mindset needs to change in this club and we need to do that between now and the end of the season and, if we can do that, we can still get seventh position.

“We need to have the motivation inside all of us that we want to be better players and want to win a spot in the starting eleven, because when you’re in a very good club you have 25 players but only eleven starters and everyone wants to play and wants to start.

“I guess that’s the mindset we need to have consistently. It doesn’t matter if we are playing against Liverpool or Manchester City or Cardiff or Huddersfield, we need to do our best and need to know that it’s going to be very hard and we need to put everything we have been doing in training onto the pitch and have our attitude that we are going to give 100 per cent to get the three points.”