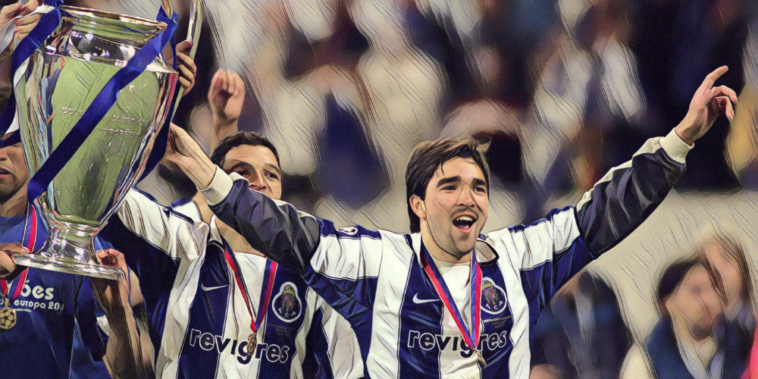 Every side outside of the elite dreams of upsetting the established order, punching above their weight to challenge the game’s biggest clubs for major honours.

Throughout the years we’ve seen several exciting sides emerge across European football, but when clubs dare to knock against the glass ceiling it often does not take long before the financial giants come circling for their prized assets.

Lille are the latest team facing a fight to keep together the core of their talented side, having enjoyed a superb season to finish as champions of France, one point ahead of the previously dominant Paris Saint-Germain.

Lille’s success has come just three years after narrowly avoiding relegation and on less than a quarter of PSG’s budget, their title-winning squad including no less than four players who failed to make the grade after being apart of the Parisian’s academy system.

The task at hand now is keeping the vultures away, with history telling us it will not be long before Europe’s biggest clubs make their interest known.

Here are five teams who overachieved before being cherry-picked by Europe’s elite.

Porto caused a gargantuan shock during the 2003/04 season, stunning the continent to be crowned champions of Europe after winning the Champions League under Jose Mourinho.

Mourinho’s side had won admirers the previous season after winning a league, cup and UEFA Cup treble, beating Celtic in the final of the latter competition in an entertaining final in Seville.

Porto continued to impress during a brilliant run through the Champions League’s knockout stages the following season, eliminating Manchester United in the last-16 in dramatic fashion before advancing past Lyon and Deportivo La Coruna to reach the final.

The Portuguese side thrashed fellow surprise finalists Monaco in the final in an emphatic performance, though hopes of building on their historic success were ended as Europe’s biggest clubs came calling in the summer.

Mourinho was appointed as the new manager of Chelsea and instantly introduced himself to the Premier League as the ‘Special One’, with the newly-appointed coach rapidly raiding his former side to secure the signings of defensive duo Ricardo Carvalho and Paulo Ferreira.

Deco – who finished as runners-up for the Ballon d’Or and was named as UEFA’s Club Footballer of the Year – was also linked with Chelsea before making the move to Barcelona, who he helped to a second Champions League success in 2006.

Fellow midfielder Pedro Mendes signed for Tottenham that same summer, whilst the remaining quartet of the Porto engine room – Costinha and Maniche – both signed for Dynamo Moscow the following summer, joining forward Derlei who had made the move to Russia in January 2005.

Such was the mass exodus, just one player from the XI that started the 2004 Champions League final win remained with the club beyond the summer of 2005.

Lille have been down this road before after seeing a wonderfully talented side picked apart following the club’s last title success, Rudi Garcia guiding the French side to the Ligue 1 title in 2010/11.

Eden Hazard was the star of a side that finished comfortably clear of Marseille and Lyon, one of six different winners across six seasons in France’s top division between 2008 and 2013.

Hazard was courted by almost every major club in European football but remained for one further season, winning a second successive Ligue 1 Player of the Year award the following campaign before making a £32m move to Chelsea.

Lille finished the 2011/12 season in third after losing several of their key performers in the aftermath of their title triumph, Yohan Cabaye and Gervinho making Premier League moves to Newcastle and Arsenal respectively, whilst centre-back Adil Rami signed for Valencia.

Moussa Sow – who finished as the leading scorer in Ligue 1 during Lille’s title success – signed for Fenerbache six months after the club were crowned champions, whilst Mathieu Debuchy followed former teammate Cabaye to Newcastle in 2012.

Jurgen Klopp remains an iconic figure at Borussia Dortmund following his successful reign at the Westfalenstadion, overseeing a remarkable rise as the club grew from near financial collapse to one of Europe’s most impressive sides.

Dortmund became one of the most watchable sides on the continent and made history by securing back-to-back Bundesliga titles in 2011 and 2012, the second coming as part of a historic domestic double that included a 5-2 thrashing of Bayern Munich in the DFK-Pokal final.

It was unsurprising that Europe’s biggest clubs came circling, Nuri Sahin the first leading name to depart as the Turkey international signed for Real Madrid following the first of the club’s title successes.

Shinji Kagawa, signed on a free transfer just two years earlier, joined Manchester United in 2012, before Dortmund’s run to the Champions League final accelerated the disbanding of their side.

Mario Gotze’s move to Bayern Munich was confirmed before the 2012/13 season had reached its conclusion, a bitter pill to swallow as Dortmund’s homegrown heartbeat departed for their most powerful domestic rivals.

Robert Lewandowski and Mats Hummels would make the same journey over the following summers, in addition to Klopp’s own departure as Dortmund struggled to repeat their previous triumphs.

Dortmund continue to unearth talent before selling players on for huge sums and their sustainable model is an admirable one, though it is the side that played with gung-ho gusto and almost conquered Europe that captured hearts.

Paris Saint-Germain have largely dominated French football over the past decade, with just one different winner of Ligue 1 in the past eight seasons before Lille’s triumph this season.

That success came from Monaco, whose exciting young side were crowned champions and wowed Europe on their way to the Champions League semi-finals.

Leanardo Jardim’s side scored more than a century of league goals and captured the attention of the football world with their fearless approach in the Champions League, eliminating Manchester City in a breathless last-16 tie before beating Borussia Dortmund in the quarter-finals.

Monaco’s run was ended by Juventus in the semi-finals, with almost every major club on the continent making enquiries into the availability of their leading assets following the 2016/17 season.

Kylian Mbappe also left to join Paris Saint-Germain on an initial loan before making the move permanent for a staggering sum that could rise as high as €180m, whilst Fabinho (£40m) and Thomas Lemar (£58m) were other high-profile exits.

Two seasons after Monaco’s run to the semi-finals of the Champions League, Ajax emerged as the competition’s surprise package to evoke memories of their European triumph in 1995.

That home-grown side was quickly disbanded following the club’s mid-nineties Champions League success, and the Dutch side’s ability to produce players once again proved both fruitful and profitable in 2019.

Erik ten Hag’s side beat tournament favourites in Real Madrid and Juventus on their way to the last four, before an incredible semi-final collapse against Tottenham cost them a place in the final and a chance at a historic treble-winning season.

The leading lights of that side were young Dutch internationals Matthijs de Ligt and Frenkie de Jong, the latter having already agreed a €75m move to Barcelona before the conclusion of the campaign.

De Ligt had captured attention after becoming Ajax captain whilst still only a teenager and it was Juventus who won the race for his signature, signing the centre-back in a deal worth €75m.

The exodus of names continued the following summer as both Hakim Ziyech and Donny van de Beek moved to the Premier League, signing for Chelsea and Manchester United respectively for a combined figure of around £70m.