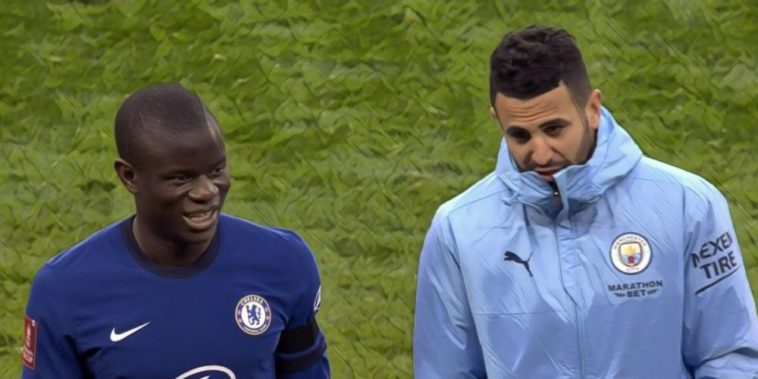 N’Golo Kante has named two of the players he ‘drew inspiration from’ and has opened up on the prospect of facing former Leicester teammate Riyad Mahrez in this weekend’s Champions League final.

Kante will form part of the Chelsea side that will take on Manchester City in a bid to be crowned champions of Europe on Saturday, as the midfielder looks to secure further success after Premier League and World Cup triumphs in recent years.

The France international has established himself as arguably the best defensive midfielder in world football over the past seasons, and has opened up on his role models in the game with compatriots Claude Makelele and Lassana Diarra named amongst his idols.

“Growing up, coaches or team-mates might tell me that I resemble such-and-such a player,” he told UEFA.com. “I was just someone who watched football; I would watch the games which interested me, without necessarily focusing on players in a similar position to mine.

“Whenever the international break came around, I would obviously watch France play. And getting to watch the likes of [Claude] Makélélé or Lassana Diarra, I drew inspiration from them at some point. But in the end, I’m not like them.

“I was lucky to be in touch with them and they’re great players with their own career, and I have my own career and path at my side. I have had some chats with Claude since I came to Chelsea. He was here to give me advice on my play, and the impact I can have on the game. Being able to talk with him about that is beneficial for me because he knows the position.”

Kante also spoke on the prospect of facing Mahrez in this weekend’s final, the duo having undertaken similar paths in rising from France’s second division to the pinnacle of club football.

Kante and Mahrez were part of the Leicester team that shocked the world to win the Premier League title during the 2015/16 season, before making their big-money moves to Chelsea and Manchester City respectively.

The 29-year-old says he has spoken to his former teammate about their rise and this weekend’s final meeting, citing their pair’s success to ‘work’ and ‘perseverance on the pitch’.

“We’ve spoken about it,” he said. “We both realise that it’s exceptional. It’s taken a lot of work from before being in Ligue 2 until now, and a lot of perseverance on the pitch and in training. So to be playing a match like this is fantastic. But we both want to win, so we won’t be friendly on the pitch. I hope it works out for me, and he’s hoping it’ll work out for him, of course!”