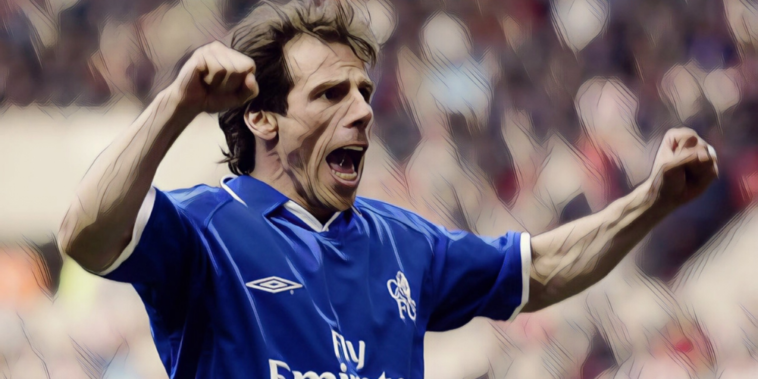 Lukaku had enjoyed the best period of his career after swapping the Premier League for Italy in 2019, scoring 64 goals in just 95 appearances for the Nerazzurri and being named as Serie A’s Most Valuable Player following the club’s drought-breaking title success last season.

Chelsea have regularly looked to Italian football for new signings during the Premier League era, signing no less than 23 players from the nation’s top division over the past three decades.

After Lukaku’s impressive Chelsea debut against Arsenal, we look at five of Chelsea’s best ever signings from Serie A.

One of the finest footballers of his generation, Ruud Gullit arrived as one of the Premier League’s marquee imports during the nineties following a wealth of success at AC Milan and Sampdoria.

The former Netherlands international had won the Ballon d’Or in 1987 and lifted three league titles and two European Cups at the San Siro, before signing for Chelsea in the twilight of an unforgettable career.

Persuaded by the presence of Glenn Hoddle to sign for a Chelsea side far from the behemoth they have since become, Gullit initially began his career in England in an experimental sweeper position before being moved further forward.

The switch paid dividends as Gullit was named as runner-up to Eric Cantona for the FWA Footballer of the Year award, in addition to winning Chelsea’s club accolade.

The pulling-power of Gullit saw Gianluca Vialli arrive at Chelsea as a statement signing in 1996, the forward having just captained Juventus to success in the Champions League.

Vialli adapted quickly to the demands of English football and scored 11 goals in all competitions as Chelsea won the FA Cup during his debut season, but found himself in and out of the team following a fall-out with Gullit.

He netted 19 times the following campaign in a demonstration of his goalscoring prowess, including scoring four times in a thrashing of Barnsley.

Gullit’s sacking as manager saw Chelsea look internally one more and Vialli took the reins as player-manager in 1998, guiding the west London side to a League Cup and UEFA Cup Winners’ Cup double, before defeating Real Madrid to lift the UEFA Super Cup.

He scored 40 goals in just 88 appearances for Chelsea across all competitions, in addition to leading an emerging side to three trophies and Champions League qualification as manager.

Amongst the most influential signings in Chelsea’s history, Gianfranco Zola secured legendary status in west London following his move from Parma in 1996.

Zola’s career saw him fail to play top-flight football until the age of 23, signing for Napoli where he learned under the guidance of Diego Maradona, before joining Parma and enjoying the best goalscoring form of his career.

Despite scoring 49 goals in just 102 appearances he was allowed to join Chelsea in a £4.5m deal in November 1996, his impact instant as he became the first player to win the FWA Footballer of the Year award after moving mid-season.

Zola was the catalyst behind a Chelsea outfit in revolution during the late nineties, inspiring the side – without a major trophy since 1971 – to two FA Cups, a League Cup and the UEFA Cup Winners’ Cup during an unforgettable spell at Stamford Bridge.

Chelsea has been home to some brilliant footballers over the past two decades as their billionaire takeover catapulted the club into the elite, but few are remembered as fondly as Zola – the little magician capable of wondrous moments.

Zola signed for Chelsea at the age of 30 but spent seven seasons in the club’s colours, scoring 80 goals in 311 appearances and cementing his status as one of the Blues’ best ever talents.

Marcel Desailly’s arrival at Chelsea reemphasised the upward trajectory the club were heading, the France international signing for the Blues from AC Milan in 1998.

His arrival came just weeks before playing a key role in France’s victorious World Cup campaign on home soil, with Desailly – who had won back-to-back European Cups with Marseille and Milan earlier in the decade – proving himself as one of the Premier League’s best.

Nicknamed ‘The Rock’, the defender mixed elite athleticism with composure in possession, his earlier career spent in midfield evident as he calmly orchestrated the Chelsea backline.

Desailly was later named as Chelsea captain and made 222 appearances across six seasons for the club, the commanding centre-back having a huge influence on a young John Terry as the defender emerged from the academy ranks at Stamford Bridge.

The Italy international endured an indifferent debut season after arriving into the Premier League, but has since grown in importance and influence to become a central figure at Stamford Bridge.

Operating as the deepest midfielder, Jorginho’s ability to dictate the tempo of fixtures has helped Chelsea to Europa League and Champions League over the past three seasons, whilst he starred as Italy were crowned European champions at Euro 2020 this summer.

The 29-year-old’s reading of the game, tactical intelligence and passing ability through opposition lines make him a fundamental player for club and country and Jorginho will be crucial to Chelsea’s hopes of future success during the Thomas Tuchel era.