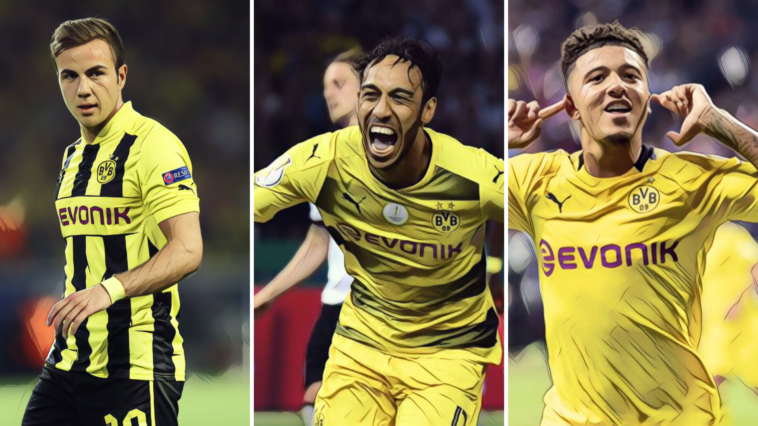 Borussia Dortmund are one of the most well-run and respected clubs in European football, with the Bundesliga side having come back from the brink of financial ruin to run a money-making machine at the Westfalenstadion.

Few clubs on the continent are as skilled in identifying and developing flourishing young footballers, before selling them on to the financial elite for extraordinary sums.

It’s a method that continues to pay dividends for Dortmund with Jadon Sancho the latest starlet to depart for a huge profit margin, signing for Manchester United in a big-money deal after four seasons of service.

Following Sancho’s move to the Premier League, we look at Borussia Dortmund’s most expensive transfer sales.

Product of the Borussia Dortmund academy system, Mario Gotze became the jewel in the crown of a brilliantly talented side under the guidance of Jurgen Klopp.

Handed his debut as a teenager by the now Liverpool manager, the midfielder became an influential figure as Dortmund secured back-to-back Bundesliga title successes, before reaching the 2013 Champions League final.

Dortmund’s run to the Champions League final was marred by the news that Gotze was set to depart at the end of the season, having agreed a deal to sign for domestic rivals – and upcoming final opponents – Bayern Munich.

The news of Gotze’s defection to the club’s title rivals was described as ‘like a heart attack’ by Klopp, who admitted sporting director Michael Zorc ‘walked in like somebody had died’ when announcing the news to the Dortmund boss.

Gotze spent three seasons with Bayern and won three consecutive Bundesliga titles, but despite flashes of his huge talent failed to truly establish himself as an integral figure in Bavaria.

He returned to Dortmund at a reduced fee of around £19m in 2016, though his second spell with the club proved less successful as he struggled to recapture his former form before signing for PSV Eindhoven on a free transfer in 2020.

A record of 41 goals in just 97 appearances persuaded Dortmund to part with around £11.7m for the Gabon international, who made an immediate impact with a hat-trick on his Bundesliga debut.

He scored 25 goals across all competitions during his debut season, before thriving further as Dortmund’s leading goal threat following the departure of Lewandowski to Bayern Munich.

Aubameyang scored 39 goals in 2015/16 to be named as the Bundesliga’s Player of the Year, before hitting 40 goals the following season, including 31 in just 32 league appearances to finish ahead of Lewandowski as the division’s leading scorer.

The forward scored a total of 141 goals in 213 appearances for Dortmund before predictable interest arrived from the Premier League, Aubameyang returning the Bundesliga side a handsome profit following a £56m club record move to Arsenal in January 2018.

Bundesliga sides have regularly scoured the US for talent over the past decade with a number of emerging Americans having thrived after being handed opportunities in German football.

Headlining a talented group of US players is Christian Pulisic, who signed for Dortmund as a teenager before thriving at the Westfalenstadion.

After a gradual introduction into the senior side the winger began to grow in influence, netting his first goal against Hamburg aged just 17 years and 212 days old to become the youngest non-German and fourth-youngest player to score in the Bundesliga.

He featured regularly as Dortmund won the DFB-Pokal the following season and made 127 appearances for the club across four seasons in the first team, scoring 19 goals.

Pulisic became the most expensive American player in history after agreeing a £58m deal with Chelsea in 2019, a huge profit for Dortmund following their development of the USA’s brightest talent.

Jadon Sancho completed a long-awaited move to Manchester United during this summer’s transfer window, with the Red Devils having first expressed an interest in signing the winger last summer.

Sancho moved to Dortmund in an £8m deal after becoming frustrated with a lack of opportunity at Manchester City, the move to the Bundesliga vindicated as he found himself on a clear pathway to first-team football.

He made 12 appearances during a debut season of adaptation, before exploding over the following three seasons to establish himself as one of the most exciting young talents in European football.

Sancho’s mix of skill and productivity saw him star at the Westfalenstadion, averaging almost a goal involvement per game across his four seasons with 114 (50 goals, 64 assists) in just 137 appearances for Dortmund.

His performances have seen him become a regular member of Gareth Southgate’s England squad and persuaded United to splash out £72.9m on his services this summer, making the 21-year-old the second-most expensive English player of all time behind Harry Maguire.

Dortmund’s greatest transfer market masterstroke, the Bundesliga side secured a profit of over £80m following just one season of service from Ousmane Dembele.

The winger signed for Dortmund from Rennes following an impressive breakthrough season in France, arriving at the Westfalenstadion for a fee in the region of €15m.

His sole season in Germany saw Dembele named in the Bundesliga Team of the Season and as winner of the division’s Rookie of the Season award as the league’s best young player.

He scored six league goals and provided a further 12 assists, before Barcelona submitted an extraordinary offer for his services in the wake of Neymar’s world-record departure to Paris Saint-Germain.

The bid included an initial fee of £96.8m – potentially rising to a figure in the region of £135m with add-ons – making Dembele one of the most expensive footballers in history.

His four seasons in Spain have included two La Liga title triumphs, though it has largely been a frustrating period for the France international who has made only 81 league appearances amid a succession of injury problems.