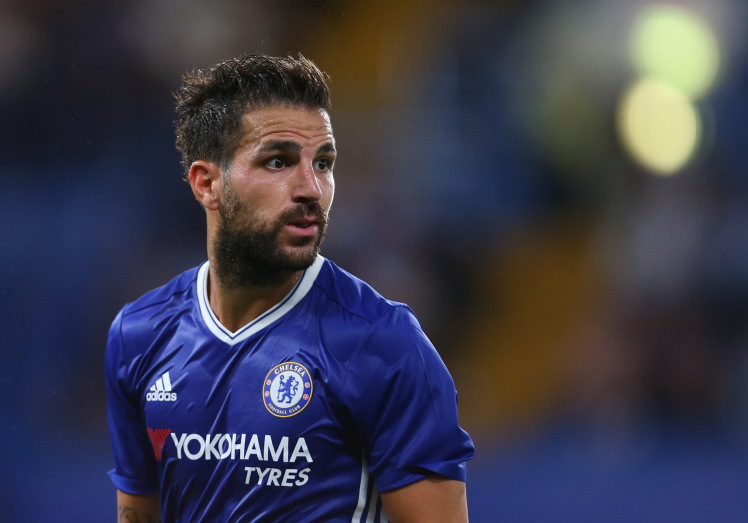 Cesc Fàbregas made an immediate impact at Chelsea and the football world when he signed from Barcelona in 2014. Here is why he should be kept at the club next season.

The former Arsenal captain ruffled the feathers of many fans in North London by signing with one of their biggest rivals in the city.

There was a bit of uncertainty among Blues fans. There was bad blood between Fàbregas and Chelsea during his time at Arsenal, including incidents regarding the celery being thrown at him while taking corners in the 2007 Carling Cup Final.

Along with that uncertainty came a glimmer of hope that came with the midfielder. For once, passes might go up and down the pitch instead of sideways. Through balls may actually penetrate Premier League defences.

Perhaps there was a bit of doubt in Fàbregas as well with the backlash from Ashley Cole’s departure from Arsenal. The product of La Masia took his time to make a decision after Arsene Wenger chose to not take back his former prodigy to Arsenal after having the initial option to do so.

“I considered all the other offers very carefully, and I firmly believe that Chelsea is the best choice,” Fàbregas said. “They match my footballing ambitions with their hunger and desire to win trophies…I am fully committed to this team, and I can’t wait to start playing.”

It was important for him to play, and he earned those minutes at Chelsea. Fàbregas played 2890 minutes in Chelsea’s title-winning Premier League campaign in 2014–15 under José Mourinho, assisting in 18 goals.

Fàbregas is having a difficult time in finding playing time this season under Antonio Conte. The midfielder has only managed to play 1047 minutes at the time of writing this article, and has mostly been used as the first substitute off of the bench. Transfer rumours to AC Milan and Manchester United are rampant due to lack of playing time.

Whenever he sensed limited opportunities during his first stint at Barcelona, Fàbregas left for London. Given the ambition of the 30-year old, it is not out of the question that he could look for a new home in order to secure more playing time. However, Chelsea need to stand their ground and keep him going into the 2017–18 season.

Squad depth is critical for Europe

Chelsea’s 10th place finish in the Premier League in the 2015–16 season kept the West London side out of the Champions and Europa League this year. This has allowed the club to focus on dominating the domestic competitions, and are the frontrunners to win the Premier League and FA Cup double.

This also allowed Conte to focus on a core starting XI that did not include Fàbregas. The manager’s 3-4-3 system needs two defensively solid central midfielders to protect the backline, a skill the Spaniard lacks in due to lack of agility and tackling when compared to Nemanja Matic and N’Golo Kanté.

Chelsea have stormed their way through the Premier League without the hassle of fixture congestion.

Unfortunately, this won’t happen next year as Chelsea qualified for the 2017–18 Champions League group stage with their 3-0 win over Everton at Goodison Park. Squad rotation will be key with the inclusion of more Tuesday and Wednesday matches to be played across the continent.

Fàbregas has played an important part of Chelsea’s run this season, even if only as a substitute most of the time. He is still capable of starting for the squad, and there will be more chances to do so, especially if the club can reach the latter stages of the Champions League.

The Italian manager has spoken about his drive to win, and putting it above player happiness. “My target is to put a winning mentality into the minds of the players. The winning mentality doesn’t exist to keep players happy,” Conte said. “I want players who are ready to fight and put themselves in the team to try to win together.”

Conte will be looking to add a European Cup to his trophy case, and he’ll need Fàbregas to help him achieve it.

It didn’t take long for Fàbregas to earn the praise of Chelsea fans. The combination of him and new-signing Diego Costa had fans jumping for joy and opposing goalkeepers quivering with fear as footballs were rolling into nets with ease.

The midfielder could make a pass that nobody else in the stadium expected, earning him the song, “Fàbregas is magic, he wears a magic hat,” that’s continuously sung in the terraces of Stamford Bridge.

The Spaniard brought a skill set to the table that nobody else had in the Chelsea squad: the ability to be a deep-lying playmaker.

Frank Lampard was forced into the role when his pace caught up with his age and he couldn’t play further forward. Fàbregas was inserted into the squad to bring a new dimension to the Blues attack, and the £27 million transfer paid off with a Premier League title.

His playmaking abilities were needed this season when defences would pack themselves into fortresses. Teams will figure out how to beat Chelsea, and the likes of Manchester United and Tottenham Hotspur already have. It is up to Conte to have a plan B, C, and D in mind, and Fàbregas allows Chelsea to play in a different style than they have been this season.

The Champions League will be a different story next season. The best clubs of Europe are all playing together, and teams will be harder to break down. Conte will need to have a system ready for new challenges, and Fàbregas could be put into a role similar to what Andrea Pirlo played in Juventus.

The Spanish midfielder isn’t surplus to requirements, and it would not be wise for Chelsea to sell Fàbregas when depth is needed for next season.

There is still a place for the 30-year old in the squad, and the club needs to communicate with the player to make sure everyone is on the same page. They still share the same footballing ambitions when he moved to West London.

“With Cesc, it’s just job satisfaction and he loves to play football. You can see that when he plays. He’s always trying to get on the ball,” Ray Wilkins said to Premier League Daily. “For Chelsea to progress to the latter stages of competitions next year, they’re going to need the guile and craft I feel only he possesses at Chelsea.”

Chelsea fans will have to hope that Fàbregas has the patience to wait for his opportunity next season.

Will Fabregas stay at Stamford Bridge or will he move on? Leave us a comment below.

If you support Chelsea, and want to contribute articles like this, join our writing team.