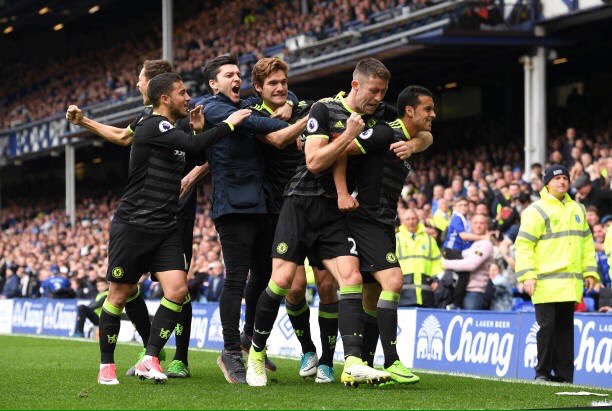 Each match is starting to get stressful for league-leaders Chelsea as they inch closer to the finish with Tottenham hot on their tails trailing by four points.

With teams packing in their defences against the Blues, it takes moments of brilliance and artistry from individuals to see it through to the end.

Pedro was the painter who answered the call on Sunday at Goodison Park, gracefully switching directions to leave Phil Jagielka flat footed and turned the wrong way. With a little bit of space, the Spaniard struck a screamer of a shot in the 66th minute on his left foot past a diving Maarten Stekelenburg to gain momentum for Chelsea as they secured Champions League football for next season with a 3-0 win over Everton.

Even with other highlight worthy scores, like his curler against Tottenham Hotspur at Stamford Bridge this season, Pedro believes this was his best goal in a Chelsea shirt. “It was probably the best,” the winger said in an interview with Chelsea TV. “It’s good, it’s nice, on the left foot.”

What was supposed to be a strike from his weak foot turned into a beautiful brush stroke on the canvas that was Antonio Conte’s masterpiece.

Gary Cahill and Willian filled in the rest with goals at the 78th and 86th minute respectively. Pedro ignited the flame, and was pleased with the team’s effort against the Toffees.

“I was very happy to score a goal for the three points,” Pedro said. “It’s very important for the team to continue as the top of the league.”

Chelsea struggled in the first half. Eden Hazard was man-marked by Idrissa Gueye, and the Blues failed to give Stekelenburg any concern in front of goal.

Although Everton did not score, Romelu Lukaku and company threatened with a few runs and weighted passes, but Cesar Azpilicueta was in position to sniff out any danger that came near Thibaut Courtois.

This painting of a match wouldn’t be complete without a bit of yellow, as referee Jonathan Moss issued seven cautions to Everton and Chelsea players, including a handball by Cahill in the 35th minute.

Chelsea continue to hold their four-point lead over Tottenham who ended a 22-year curse of “St. Totteringham’s Day” in a 2-0 win over Arsenal at the last North London Derby in White Hart Lane before temporarily moving to Wembley Stadium next season.

Everton are in seventh place with 58 points, and face Swansea City at Liberty Stadium on Saturday.

Here are some talking points of the match.

Like their position on the Premier League table, Everton locked down the middle of the pitch and put pressure on the Chelsea defence in front of them. The combination of Lukaku and Enner Valencia up top created havoc, and the Belgian striker was at the end of many through balls from the rest of his teammates.

What lacked was the finish that could put them over the top. Chances were constantly shepherded away by Azpilicueta, and Lukaku failed to score against his former club.

That’s not to say that the Blues defence stopped him completely. In the 23rd minute, Azpilicueta headed the ball back to Lukaku, and the former “Fridge from Stamford Bridge” held off David Luiz to put a shot just wide of the post.

Everton put on a show for the Goodison Park faithful, displaying the potential they have in the years to come if they don’t lose their stars.

After Pedro’s goal, manager Ronald Koeman put in substitutes Kevin Mirallas and Arouna Koné to hunt for the equalizer, leaving space for Chelsea to add two more to the tally. One could only imagine what the match could have been had one of the earlier chances in the first half went in for the Toffees. Perhaps they would have climbed over Arsenal into sixth place.

David Luiz looked to be playing in pain throughout the second half, and in the 81st minute, he plopped to the ground once more holding his groin, signalling that he couldn’t finish the game. Teammates were gathered all around the trainers helping the Geezer, and fans held their breath that their cult hero that looks like Sideshow Bob from The Simpsons would be okay.

Everyone knew of Luiz’s importance to the backline as the ball-playing center-back in the middle of the three-man defence.

Without Captain, Leader, and Legend John Terry available on the bench, one would assume the physically imposing Kurt Zouma would be subbed on to replace the fan favourite with floppy hair.

However, 22-year old Nathan Aké was instead chosen to not only replace David Luiz, but to play in his same position that requires discipline and a reassuring calmness that everything is going to be okay.

Things did end up fine as Willian scored the third goal, plunging the dagger into the hearts of Everton fans at Goodison Park.

In his first Premier League game since being recalled from loan at AFC Bournemouth, Aké showed why the manager trusted him over Zouma, which could be foreshadowing the Dutch defender’s future in Conte’s scheme. “I am very pleased for the impact of Aké in this game,” Conte said in the post-match press conference according to Liam Twomey of ESPN. “He came on and looked like a veteran and it’s great.”

Conte downplayed the severity of Luiz’s injury. “I didn’t speak with the doctor about his injury, but I don’t think it is a serious injury,” Conte said. “I hope in the next game that David Luiz is available to play.”

Chelsea fans will hope for the best as Luiz recovers with four very important games left to close out the season.

Chelsea’s magic number is nine—a combination of Chelsea wins and/or Tottenham losses and draws must equal to nine for the Blues to win their fifth Premier League title.

Assuming the Spurs don’t lose for the rest of the season, Chelsea need to win at least three of their final four league matches to be crowned champions.

The final four that look to upset the Stamford Bridge faithful are Middlesbrough, Watford, and Sunderland at home, and West Bromwich Albion away. On paper, three out of four, if not all four, should be easy to win for Chelsea who have been at the top of the table since Matchweek 12.

However, football isn’t won on paper. Boro are continuing their desperate fight against relegation, and every club wants to be the one that ends Chelsea’s title hopes and dreams.

The win against Everton was one more step to achieving what seemed impossible after a 10th place finish last season, but Conte knows to look forward to the next match.

“It is a great win,” Conte said. “Now it is important for us to prepare the right way the next game. If we don’t win against Middlesbrough we lose this great win.”

It’s Chelsea’s title to lose now, and there are only three more roadblocks for the bus to drive through.

Without the first goal scored by Pedro, it is entirely possible Chelsea wouldn’t have the momentum to score the other two. The Spaniard’s goal caused Koeman to make changes for Everton, and they paid the price for emphasizing attack when Chelsea put two more into the net.

I wrote about why I think Pedro has found a home at Chelsea under Antonio Conte, and he continues to show his skills that a lot of people forgot about after his great Barcelona years. Pedro is man of the match for his sublime strike.