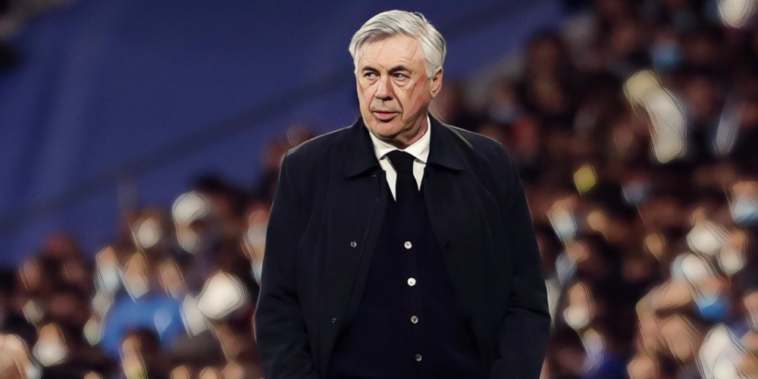 The UEFA Champions League quarter-final second legs take place this week with the competition’s last four set to be finalised.

Manchester City and Liverpool will take first leg advantages into their ties with Atletico Madrid and Benfica respectively, though Chelsea face a daunting challenge as the holders look to overturn a two-goal deficit at Real Madrid.

There’s also work to be done for Bayern Munich, who suffered a shock 1-0 loss to Villarreal in their first meeting a week ago.

Ahead of a fascinating set of quarter-final ties, we’ve picked our four Champions League talking points.

Ancelotti on edge of further greatness

Few modern managers possess a résumé that can compare to Carlo Ancelotti, whose managerial career has taken in spells at genuine giants of the European game.

Juventus, AC Milan, Chelsea, Paris Saint-Germain, Bayern Munich and Real Madrid (twice) have all trusted the Italian to lead their sides to silverware, with four league titles and a joint-record three European Cups having arrived across those spells.

🗣️ @MrAncelotti: "To qualify for the semi-finals, we have to suffer, compete and fight."#UCL pic.twitter.com/bS1gbDp9j4

This season Ancelotti has the chance to write his name further into the history books, with Real Madrid’s 3-1 win at Chelsea last week having underlined the Spaniard’s credentials as dark horses in this season’s Champions League.

Liverpool, Manchester City and Bayern Munich are all more fancied, but Real Madrid boast a core of players experienced in winning this competition and a manager who knows how to reach the business end of the tournament.

Strong favourites to reach the semi-finals with a two-goal lead to protect at the Bernabeu, progress to the last four will raise hopes of a record-extending 14th European crown heading to Madrid this season.

Ancelotti could become the first man to win four Champions League trophies as a manager this season, whilst he’s also on course – Real sit 12 points ahead in La Liga – to become the first to win league titles in each of Europe’s top five leagues.

Julian Nagelsmann has vowed that Bayern Munich will not repeat their disappointing showing against Villarreal last week, with the Bundesliga champions deservedly beaten after an off night at El Madrigal.

“We played a bad game and they played their best game,” Nagelsmann said ahead of the clash. “This will not happen again, to play badly against the same opponent twice.”

🗣️ @J__Nagelsmann: "We can't give Villarreal the time they need to find their rhythm. We need to be more unpleasant to play against. However, we shouldn't spend too much time talking about it, and instead need to make sure we deliver tomorrow." #packmas #FCBVCF pic.twitter.com/0cmDCE0t2u

For the second successive round Bayern head into the home leg with work to do and Nagelsmann will hope for a repeat of their last-16 response, in which the German giants thrashed Red Bull Salzburg 7-1 after an unconvincing draw away from home.

Villarreal have a 1-0 lead to protect and will be full of confidence following a strong showing last week, with the onus on Bayern to take the game to their Spanish visitors at the Allianz Arena.

Bayern are cruising towards a tenth consecutive Bundesliga title but will need to raise their intensity levels to make an impact on the Champions League’s latter stages, starting with a stern test to turnaround their tie with Villarreal.

Atletico Madrid were predictably pragmatic during their quarter-final first leg at Manchester City, with Diego Simeone’s side lacking attacking ambition in deep defensive lines at the Etihad.

Despite boasting two forwards who have each completed transfers in excess of £100m in their ranks, it was backs to the wall defending for the Spaniards whose sole focus was to frustrate the Premier League champions.

Their approach almost worked, but Kevin De Bruyne’s goal has provided City with a slender lead ahead of the return at the Wanda Metropolitano.

Atletico have no option but to come out and take the game to City at some stage on Wednesday evening, a scenario which could suit Pep Guardiola’s side.

It’s unlikely to be gung-ho from an Atletico side famed for their risk-averse approach, but Guardiola’s game-plan will be to exploits the gaps that open up.

Klopp to rotate Reds ahead of semi-final showdown?

Liverpool are overwhelming favourites to reach the semi-finals after a 3-1 win at Benfica last week, Luis Diaz’s late goal having provided the Reds with a two-goal advantage.

The return with the Portuguese side comes sandwiched between two high-stakes games with Manchester City, the title rivals having played out a pulsating 2-2 draw at the Etihad on Sunday before an FA Cup semi-final rematch to come this weekend.

Attentions turn to the second-leg of our #UCL quarter-final! 👊🔴 pic.twitter.com/rfuh4KGvMd

Klopp will have confidence that his side can complete the job at Anfield despite some rotation, as he looks to provide key personnel with a rest ahead of the showdown with City.

There is unlikely to be wholesale changes from the Reds, but the likes of Ibrahima Konate, Naby Keita, Roberto Firmino and Diaz could all come in after being named as substitutes at the weekend.

Mohamed Salah – who has looked below his usual best in recent weeks – could be one name granted a rest and a chance to refresh for Wembley.