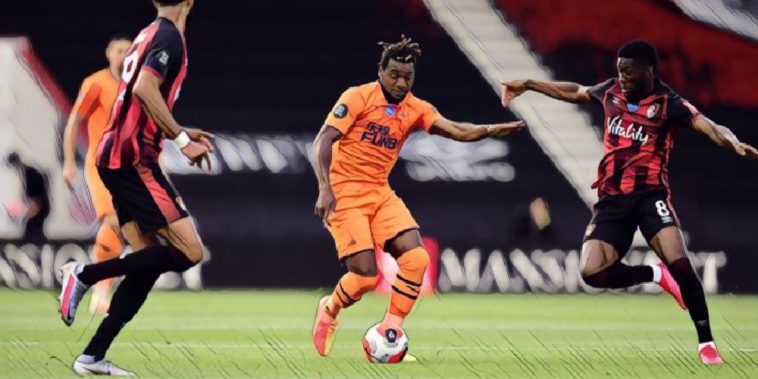 Steve Bruce has ruled out the prospect of selling Allan Saint-Maximin or Miguel Almiron following the impressive performances of the duo at Newcastle.

Saint-Maximin has enjoyed an impressive debut season at St James’ Park is apparently keen on an improved contract, the winger starring during the mid-week destruction of Bournemouth with three assists against the Premier League strugglers.

Almiron has also been tentatively linked with a move to Atletico Madrid as Newcastle enjoy a fine restart to the Premier League season, though Bruce has ruled out the sale of his best players despite the transfer speculation as he bids to build for the future.

“We can’t help that (speculation) at Newcastle,” Bruce said at his pre-match press conference ahead of the Magpies clash with West Ham this weekend.

“Even with the result we’ve got, there’s still a negative story. Allan has only just arrived here. He signed a six-year deal in the summer. If people are talking about him, good. It means he’s doing it on the pitch.

“People are talking about Allan and (Miguel) Almiron, which means they’re performing on the pitch. That’s all they can focus on and let the rest look after themselves.

“There’s always going to be speculation at Newcastle. To be linked with other clubs, they have to be performing well. My job is to make sure they keep performing well and then let that other stuff look after itself.

“They’ve only been here a short while, and they’ve performed very well. Our job is to keep our best players.

“We certainly don’t want to be losing them – we want to be building around them – and that’s the plan.”

Saint-Maximin has starred since arriving from Nice last summer and the 23-year-old appears to be growing in confidence as he adapts to English football, with Bruce lavishing praise on the star who has quickly become a fans’ favourite in the North East.

🗳 Allan Saint-Maximin has been nominated for the @premierleague Player of the Month award for June!

“The assist he made for Sean [Longstaff’s] goal, I don’t think there’s anyone on the pitch that can beat three men in five yards like he did.

“He’s still got a long way to go and to add that finishing touch to the natural ability he’s got.

“We’re delighted with the improvement he’s made and the way he’s adapted to the Premier League. He’s on the right road and that’s pleasing for everyone.”